Nicky stumbled upon Animal Hoarders one late night while flipping the channels. It's a spinoff of A&E's Hoarders (and not to be confused with TLC's Hoarding: Buried Alive. The animal hoarders are fucking gross with 20, 30, 40 feral animals roaming through their homes with piss and shit and puke everywhere. One woman had 65 cats with 20 kittens and 3 pregnant mothers. She never bothered to get any of them snipped or sprayed, or torn and frayed. Man, the foul bitter aroma of feline urine from one cat is disgusting. How about a dozen cats, or 65? If you toss a match in there, all of that ammonia might ignite. 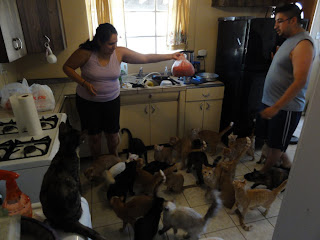 Similar trait among animal hoarders? They all think that they are trained veterinarians by the simple fact they have multiple animals, and think they are helping animals but are actually hurting them.The renonkulous sums of money that they spend to feed the animals also baffles me. The ones who give up their bedrooms are sad cases.

I got sucked into this show fast. Nicky and I watched a five-hour marathon, fascinated by the unbelievable amounts of damaged souls. I'm not a fan of the reality genre, but the hoarding theme has triggered something inside me because I've touched on this on the Tao before. The different hoarding shows partially inspired a short story that I wrote titled Everest.

The fallout from constant bombardment of advertising causes weak-minded parts of the herd to become brainwashed compulsive shoppers, which spills over into a hoarding problems when they have no place to put their stuff. It boggles me that parents put their kids before their stuff. The first group of hoarders are train wrecks -- infestation of rats, roaches, trash everywhere, newspapers, magazines, even dead animals underneath piles of trash. Most of those cases are elderly people who have health issues that prevented them from cleaning, or they had too much pride to ask for help.

During the tour of hoarding house for the film crew, the hoarder always has one room that is packed to the ceiling with junk. The camera pans with dramatic background music to reveal years of neglect. That made me wonder that so many people have rooms like that in their brains -- emotional hoarding -- with all of your problems, phobias, and grudges locked away in a back room and spilling over into the hallways, and on the stairway.

Sometimes, you gotta throw that mental garbage out, but accessing the inner hallways and back rooms insider your head is not as easy as you think.

Email ThisBlogThis!Share to TwitterShare to FacebookShare to Pinterest
Tags Hoarding