Off Night, Off Kilter

Phish had an off night and couldn't connect to the crowd -- whether it was one of those group orgies or an intimate mindfuck -- they just couldn't make it happen. Plagued by poor song selection for the entire night, their reception for their last of three shows in Colorado was lukewarm at best and outright nasty on the opposite end of the spectrum. It's one thing to take a piss when you hear a song you don't like, but it's downright disrespectful to throw glowsticks purposely at the band -- and by the band, I mean 99% at Trey who bore the brunt of the aerial bombardment all night.

It's not easy being Phish because no matter what they do, it's going to alienate somebody. If they stick to their greatest hits, someone is gonna bitch that they want to hear something else. If they play new material, someone is gonna whine about missing YEM. And if they ever bust out an old tune that hasn't been performed in the 3.0 era, someone is gonna complain that it was a shitty version.

Phish's setlist are sort of like a lineup in baseball or a sports team in general. If the players don't mesh with each other and lack a cohesive chemistry, then it's going to be tough to win on a consistent basis. Last night's lineup looked like a bunch of bush league ballplayers that might never make it to "the show", who got thrown together with a handful of washed up over-the-hill vets.

On a positive note, 10/12/10 is an important date in Phishtory -- it marked a step forward in the artistic growth of Phish because the band made a clear decision to play new material, including newish songs from Joy that the majority of Phishdom loathes like Time Turns Elastic. If the public wants a nostalgia act (like what happened to the Grateful Dead in the 1990s, and even today with Furthur), then why bother learning new material? But if the fans want the true essence of Phish, then they have to accept the simple fact that Phish offered you the ride -- and you accepted. It wasn't the other way around.

A year and a half into the 3.0 era, Phish is struggling with what all great artists struggle with when the reach the crossroads between commerce and art. People are paying a lot of money in a shitty economy to see Phish, which creates an immense burden for Phish to carry into each show that they play, but at the same time, as musicians and artists they want to grow individually and collectively, but have to made concessions and sacrifices, otherwise they will alienate their entire fan base. It's a prickly situation, and I'm afraid it's going to get worse unless the fans either lower their expectations and give the band more slack to play new material. At the same time, the band is going to have to loosen up a bit and surrender to their own flow, which means allowing some of their jams to develop into behemoths, instead of playing it safe and keeping the song times shorter in order to play more songs per show.

The only way a song will improve is with play time, but therein lies the conundrum -- in order to play new material, older material gets sacrificed. And, in the case this summer, many jams were cut short in order to make time for new tunes. Gone are the days of four song second sets. Trey is no longer hooked on the pharmies, so the 20-minute Oxy Jams are extinct.

So, enough about spoiled Phisheads and the artistic woes of Phish. So how about the show? Was it that bad? At one point in the first set, the Joker sent me a text from the floor, "Is this worse than Deer Creek?"

I told him no. The setlist looks much worse on paper than it sounded. The band's level of musicianship is much better in Colorado than that trainwreck of a set 1 in Deer Creek this summer. Heck, even the TTE was a notch up, and better placed second in the lineup, which almost guaranteed that fewer jaded fans would head to the bathrooms. Jonas said it the best: "I don't have to piss yet."

Set 1's song selection did not bode well with most of my friends, although I found a few gems in the rough. Meat was one of the few bits of protein in the first set. Gordo-infused funk. What's not to like? Timber Ho! contained couple of dark grooves, but stopped before they got anything really cooking. On Your Way Down is one of those classic rock covers that allows Page to stretch out his range a bit (in a better way than the average Phish song, which is why so many of Page's best moments often happen during covers -- Loving Cup, Rock and Roll, Light Up or Leave Me Alone, Oh Sweet Nuthin, etc). Altough the set closer, 46 Days, legitimately saved the set, I wondered if it was that good? Or was it because the first set was that dismal?

During the setbreak, I caught up with the rumor mill (a.k.a. Wildo) and a story involving a wook getting tazed by police for doing a dippy in Shakedown. I love urban lot tales. Despite the gossip, I noticed a rapidly growing sentiment of hostility from the crowd that sprouted with TTE and continued to grow throughout the opening set. Half of the crowd was optimistic and awaiting a raging second set to make up for the first set hiccup, while the rest of the crowd was outright pissed off. I felt bad for my buddy Jesse, or anyone else who flew in just for Tueday's show.

The rager that everyone expected was on pace after a meancing Carini opener and a scorching David Bowie to open Set 2, but they downshifted a gear with Theme. At this juncture, Light has become the best jamming vehicle in 3.0 Phish, but the downside is having to dig through the muck during the first five minutes of the song to get there. They restored the energy level with the Light jam and kept up the momentum with a rocking Free that featured a few chaka-chaka-chaka Trey riffs.

Alas, more song selection woes killed the rest of the show. The boys shot their load with the Carini > Bowie opener. I'm ambivalent about Joy and know that it's getting played in a late second set every fourth show or so. But, piggybacked with Halfway to the Moon, the band took two much of a risk and lost their connection with the crowd at one of the most crucial moments of the show. To compound the fractured relationship, they played Bug, which isn't exactly the best way to whip the crowd in a frenzy, or taking them from 0 to 100 in six seconds, like a dozen or so other songs in their vast repertoire would have easily accomplished. Yeah, I saw a spectacular Bug at Alpine Valley, but that was after a smoking set 1 and set 2. The set up is as important as the execution.

Summer of 89... was the final nail in the coffin. That right there perfectly explained the show -- poor song selection. Wrong time. Wrong place.

Split Open and Melt was dirty, dark, and sloppy to all hell. I had another one of those moments where I couldn't tell if the crowd was genuinely turned on by the song, or if they were happy to hear anything decent after a four song blackhole of Joy-Halfway to the Moon-Bug-Summer 89.

I expected a multi-song encore to make up for the blah evening, but at that point, I dunno if anything could have really saved the show. Meatstick contained Japanese lyrics, but at one point Trey forgot if they were singing the chorus in Japanese or English. The best part of the song happened when the band walked off the stage, and the audience continued to chant the chorus (acapella and in English) a couple of times while Kuroda's white spotlights scanned the crowd. The house lights went up and a few people continued to sing. It wasn't quite the same effect that Trey and Mike had during their duo acoustic set for the Fourmile Benefit show on Sunday, when they finished their set with Bathtub Gin and walked off the stage as the crowd chanted.

We got an off night, but at least I got to hang out with some cool friends, many of whom I would not have seen if Phish were not playing in Colorado. Our theme of the night was Yacht Rock, which was well embraced by our crew. By the way, many thanks to Jonas and Katie for setting up a 20-person party limo for all three nights. And as always, thanks to the Joker for letting me and Nicky crash with him. 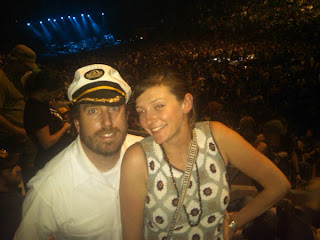 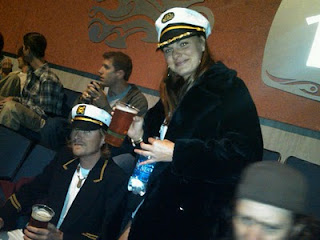 Overall, I had a blast in Denver, like I always do, mainly because this is the Joker's backyard and we always have fun with Phish -- even on an off night. After four shows at Red Rocks last summer and two at Telluride this summer, I realize that I'm lucky that I got to see Phish nine times in Colorado.