Monday morning's writing session was crudely interrupted by a leaf blower going off at 7:30am. Talk about a super early start for one of the many landscaping crews working the area. That's part of the daily bustle of the city that I didn't have in Las Vegas. I don;t think I saw a single person roaming around our subdivision. Living in a house in a burb-like secluded area was the opposite of a constant flow of people that walk through the alley or wander by in front of our house. LA is not what you would calla pedestrian city, but we experienced more foot traffic in one day than two months in Vegas. No one walks outside in the desert. Why would you?

Nicky liked the house because it was quiet and serene. Aside from two goats that the neighbor had, there was not much noise except hearing the blowing wind -- or something related to the wind,like a piece of paper flapping around or something getting knocked over by a strong gust.

I missed the sunshine, especially the blinding light that rushes through the window in the dining room. That's where I like to write in the mornings when Nicky is asleep. As the sun shifts, so do I around the massive table. On overcast mornings, the sun is blocked by a marine layer until it burns off and the usual California sun punches through the littlest of openings in the sky.

I missed having to squint as I wrote to whatever melodious sounds were flowing throughout the apartment. I missed the excitement of jumping out of bed to write instead of slowly crawling out of bed to see what sort of drama bomb exploded when I was asleep and to finish writing what I never got down the night before. Ah, I always write better when I want to (LA - morning sessions) than when I'm supposed to (Vegas - freelance or covering the WSOP on Tao of Poker). It's the shit you always do for yourself that means the most. I cannot explain it in any other way. 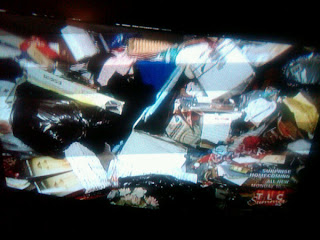 The last few days have been lazy. Maybe it's what most folks do on a weekend -- lounge around on the couch and watch mindless TV shows, movies, and sports -- but it's not something I do very often because I'm always working on something and don't have time to waste vegging out in front of the boob tube. Alas, I forced myself to rest on the couch and not move for hours at a time. I caught up with recorded episodes of Hoarders, along with a few episodes of Intervention and Ramsay's Kitchen Nightmares. I got a little wasted while watching those reality programs and wrote haikus to sum up the drama.

Yes, I snuck a Hollyweird flick haiku in there. I watched Inception for the first time (and second time too). I fell into the pitfall and listened to the hype from the critics and my friends. Although not really the same concept, but harping on a similar theme, I preferred how Charlie Kaufman approached the conundrum between reality and non-reality and how it bleeds into one. Ah, maybe I just wasn't fucked up enough to fulling grasp Inception. I doubt I'll have 2+ hours to give it a third viewing. But for now, it sort of let me down.

I caught Super 8 in the theatres with Nicky and her sister. We grabbed dinner at the Pink Taco and got seated next to a hipster b-day party. One of the guys wore a fluorescent orange tank top, jorts (jean shorts) and cowboy boots. I caught him doing blow in the bathroom. Anyway, after dinner we headed to the theatre and I fell asleep twice. Nicky had to wake me up both times. The first time I was snoring somewhat loudly. The second time, I had dozed off more stealthily. The second act had a few lulls that literally put me to sleep. One of my friends added the Chuck Klosterman line -- "Seeing Super 8 reminded me how much I missed watching Steven Spielberg movies." Yes, I too have a longing for Spielberg flicks from my youth. I caught Close Encounters a few months ago and it still held up to Jim Cameron's flying blue people and over-the-top visual landscapes created by a CGI'd sci-fi effects spooge-fest.

Ah, I wish I had more time to just go off on a 4,500-word tangent about the vauge barrier between reality and the dream state, along with a dissertation on Spielberg flicks from the 1970s. Maybe I'll save that for later in the week. For now, I gotta finish packing and head out to the airport. I was home for less than four days before it's time to get back out on the road...
by Pauly at 7/25/2011 10:52:00 AM