Here's the third (and perhaps final) batch of episodes from Tao of Pokerati podcast, which is a quick podcast anywhere from 3 to 8 minutes in length. My partner in crime is Dan Michalski, but when he wasn't around, I often asked a couple of my friends to join me in random discussions about gambling, Vegas weirdness, and the World Series of Poker.

Before we begin, here's a quick rundown of some of the co-hosts...

- Dan... editor of Pokerati.com, originally from Dallas, and he's a talking head, yet admittedly he knows nothing about poker.
- Change100... aka Nicky, she spent more time this summer playing poker than actually writing about it
- AlCantHang... former rockstar from the AlCantHang Experience, he gave up the life as a heavy metal headbanger and became a computer geek before he turned into poker industry party animal
- Benjo... co-host from Lille, France, he translated Lost Vegas into French and no longer chain smokes, but he loathes the poker scene as much as we all do.
- Snoopy... writer from London whom I auditioned to be my new sidekick because he has a funny accent, just like Benjo, but he was a valuable resource on all things British
- WhoJedi... photographer from Indiana who is a total Star Wars freak.
- KevMath... the most knowledgeable person in the world about poker, which is why we all suspect he's really a computer.

Okay, now that you know the cast of characters, here's the podcasts which we recorded in the last week or so...

Episode 29: Media Mania and Golden Toilets with Change100 and AlCantHang (3:08) - Pauly is still in the media event, so Change100 takes the opportunity to chat with AlCantHang. They both busted rather early, especially AlCantHang, who won a dubious honor of being the first player to bust out. His reward? A Golden Toiler trophy for last place.

Episode 30: British Beef with Snoopy (8:01) - As play progresses on Day 3, Pauly and Snoopy hang out and discuss the finer aspects of British beef. Well, not really, but the title sounded rather cheeky. Actually, the two chatted about which Brits were remaining in the Main Event, along with a quirky story about sharing electric shavers and Neil Channing's bustout. Snoopy us to keep an eye out for the up and coming Chris Brammer.

Episode 31: Secret Bubble Boy with WhoJedi (1:31) - The Main Event crawled toward the Money Bubble, which historically speaking is always the most exciting time in poker. However, this year's bubble popped in the corner of the room and happened so quietly that everyone almost missed it.Luckily Pauly and WhoJedi were on the scene to give you their quick assessment.

Episode 32: Semi-Live WSOP, Live from the Palms (3:21) - The WSOP is being broadcast on ESPN with a 30-minute delay, and it's also being streamed online at ESPN 3. Dan has not been at the Rio, because he's been keeping an eye on the Main Event by watching ESPN's coverage. Pauly mentions that finally watched some of ESPN2's coverage, which was on in the background while he and Dan played in the Pokerati mixed game at the Palms.

Episode 33: Two Brits, One Irishman with Snoopy (5:09) - Snoopy gives Pauly the latest British report with three tables remaining in the Main Event. Snoopy clues us in on the two Brits (Sam Holden and JP Kelly) still alive along with Eoghan O'Dea from Ireland. Even though O'Dea is Irish, Snoopy and Brits are still keeping an eye on their "adopted" player.

Episode 34: Tent City (5:01) - Dan and Pauly went outside and wandered around tent city, where all of the ESPN live feed production trucks and Poker PROductions trailers were located. Pauly hasn't seen much of the semi-live coverage on ESPN and Dan clues him in on what he's been missing...

Episode 35: Patchwork Orange (6:06) - Dan and Pauly hang out late on Day 7. Dan tells everyone how his girlfriend checked out the Main Event for the first time to check out all the hoopla. The discussion shifts to patch deals and lack of huge sponsorship money on TV tables.

Episode 36: KevMath WSOP Exit Interview with KevMath (8:50) - Kevin "KevMath" Mathers is officially done with his WSOP assignment, but he stopped by the Rio to watch the action on Day 8. He bumped into Pauly, who sat him down to discuss his favorite moments (and least favorite) during his first ever WSOP. Pauly also quizzes him on any strange "fan" encounters along the way.

Episode 37: Pseudo-Final Table (6:02) - Dan and Pauly are on the rail of the Mothership as action resumes for the pseudo-final table of ten, otherwise known as the November Nine bubble. Plenty of tension in the air because the final table will be set with just one more elimination.

Episode 38: Pucked Up Hand (4:48) - Dan and Pauly thought they were recording an episode during an elimination hand, but they mistakenly got the players mixed up. Instead of a bustout, they witnessed a double up by Matt Gianetti. The simple error leads to a suggestion that perhaps the WSOP needs to highlight all-in players with special colored spotlights.

Episode 39: Bruno's New Toy (4:20) - Fun Warren brought a batch of dolls to the WSOP. The dolls, resembling famous poker pros, were custom made in London . He left a couple behind for Pauly and Dan. Pauly got Phil Hellmuth, while Dan seems a little disappointed with Daniel Negreanu. Dan suggests that he'll probably give the Negreanu's doll to his dog Bruno, so Bruno will now have a new play toy.

If you want to listen to all of the episodes from earlier in the WSOP, visit the Tao of Pokerati podcast archives. You can also tune into episodes we recorded during previous WSOPs (2008, 2009, 2010, and 2011), November Nine final tables, and other random stories, like when Benjo and I were in Budapest covering a poker tournament. 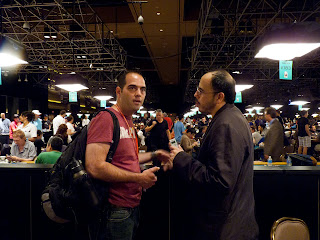 Oh, by the way, I compiled a list of a dozen favorite episodes from the earlier in the WSOP,which included my colleague Remko (a writer from Holland) and the legendary Johnny Hughes (author of Texas Poker Wisdom). Here they are...

Episode 7: Sahara Liquidation with Remko and Benjo (6:12) - Benjo and Pauly discussed the Sahara Casino liquidation sale/auction with one of the members of the Dutch press, Remko. Both Remko and Benjo expressed a keen interest in acquiring a slot machine for super cheap, while Pauly has his eyes set on a Pai Gow table. Meanwhile, Benjo and Remko try to figure out how to ship a slot machine from Vegas to France and Holland.

Episode 12: The Tweaker Edition with Benjo (4:02) - Benjo and Pauly hang out at the Gold Coast and watched a tweaker get 86d by security. They later encounter the tweaker in the parking lot, and Benjo asks Pauly for a quick tutorial about the seedy Las Vegas meth scene.

Episode 17: WSOP Fashion Report with KevMath (5:10) - Pauly chats with KevMath, who is a self-described "fashion expert." The two compare and contrast the different styles of clothing worn by members of the media. KevMath also reveals why he won't wear shorts.

Episode 19: KevMath Keno System with KevMath (6:01) - Pauly and KevMath hang out at the dive bar in a bowling alley at the Gold Coast. KevMath was in the middle of crushing a video Keno game, when Pauly asked him to share a couple of his big secrets to beating the game.

Episode 20: Adieu, Benjo (8:40) with Benjo - After almost a week of speculation and rumors, Benjo confirms that he's leaving Las Vegas and heading home to France. His brief stint at the WSOP is officially over. One chapter ends, and a new one begins. Dr. Pauly, Dan and Benjo hang out in the dive bar inside the bowling alley at Gold Coast to listen to Benjo bid his farewells.

Episode 21: New Dynamic Duo with Snoopy (5:59) - Pauly holds auditions for a new sidekick with only one requirement -- a outrageous accent. Snoopy, a writer from London, nails the audition. In this episode, they discuss modeling their new dynamic duo on the Batman & Robin television series, in addition to re-locating the Bat Cave to England and installing bat poles in the press box.

Episode 23: Brazil's Mothership Invasion with AlCantHang (2:50) - Pauly and AlCantHang are on the rail inside the Mothership watching the heads-up battle between American Nachman "The Landlord" Berlin and Brazil's native son Andre Akkari. Al and Pauly record a quick episode moments after Akkari won a decisive pot to cripple Berlin, and the Brazilians went berserk.

Episode 26: Main Event Begins! (6:34) - The Main Event is upon us and before the cards went in the air, Pauly is hanging out and listening to TD Jack Effel's long-winded introduction and a quick rundown of the rules to all Main Event players. Jack then introduces Texas Dolly to utter the famous phrase, "Shuffle up and deal!"

Episode 27: Almost Famous with Snoopy (3:32) - While players return to their seats after the dinner break, Pauly and Snoopy notice Jason Alexander posing for pictures with fans. Snoopy explains why Seinfeld wasn't a big hit in England and Pauly discovers someone dressed as Snow White in the crowd. Pauly also wonders if Snoopy would ever dress up in a costume for the Main Event.