I've always been skeptical about the program Ancient Aliens because it appears on the History Channel. There's never been actual evidence of aliens in the mainstream media, yet a show about ancient aliens (which if true destroys numerous popular religions) is in circulation on an educational channel instead of a Sci-fi channel. Don't you think that's strange? Some people might take the show as fact instead of conjecture.

I enjoy Ancient Aliens and love to get sucked into random marathons that air on the weekends. I've spent more hours than I'd like to admit completely faded, schwasted, and hammered watching three or four straight hours of Ancient Aliens. It's truly a show geared to stoners.

My only problem with the show is that most of the content has become is repetitive. At this point into the third season, each show fits into a formula.... lots of speculation about ancient gods being extra terrestrials, the handling of bizarre artifacts, close ups of ancient scribblings on caves, a wide shot of outer space, the occasional Ancient pyramid shot, and this guy... 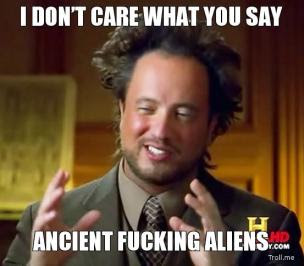 He's my favorite alien "expert." He looks like Dr. Nick from The Simpsons. He even has a slight accent too, which makes his spots even funnier whenever he comes on. If you want to play a drinking game, take a shot every time he's on screen and take another shot when he mentions "ancient aliens." I bet you get shitfaced before the show even ends.

Sure it makes sense that many of the "gods" in Greek and Roman mythology could very well be associated with ETs because the stories are just too freaky and they had tons of mythical creatures roaming the Earth. Then again, I haven't seen any of those weird creatures -- men with dog heads and cat heads (as seen in Egyptian hieroglyphs) or centaurs. How about flying dragons and unicorns? We can't even find Big Foot and it almost took a decade to locate Osama Bin Laden (he was watching cable TV in a lush compound when he was supposedly whacked). So I doubt we'll be able to parade a couple of Greys on The View to be grilled by those crazy cats.

Anyway, if you haven't watched Ancient Aliens, give it a shot. Even if you think it's total horseshit, at least it's an entertaining way to zone out in front of the boob tube and see some cool archeological stuff. And if you happen to believe in extraterrestrial life, then this show is what you've been waiting for.
by Pauly at 11/04/2011 12:34:00 AM

Email ThisBlogThis!Share to TwitterShare to FacebookShare to Pinterest
Tags Aliens