The ABA. When I was a little kid, the ABA was synonymous with two things.... 1) red, white, and blue basketball, and 2) ginormous afros. 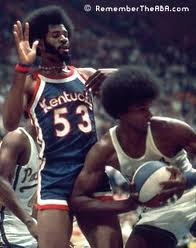 Artis Gilmore (left) defends Darnell Hillman (right)
It the aftermath of counter culture, the NBA represented the Establishment, while the ABA became a bastion for rebels, outcasts, misfits. My kind of people. The addition of a three-point line opened up the game, which bred a fast-paced environment with tons of high-octane offense. Free-flowing. Uppity jazz-like solos. Nothing like stifling and boring game in the NBA, which incorporated a very disciplined game plan... walk the ball up the court and work it inside to one of the big men. The ABA was all about offense and scoring and more scoring and more scoring. Fast. Fast. Fast. Up tempo. Let's get the ball and run and gun.

If you recall Knicks teams in the 90s and the final scores were always like 83-80. Defensive struggles. Ugly basketball. On a good night, the high-flying ABA teams would put up twice as many points. Final scores of 173-145 were not uncommon. I'd love to have been a pro bettor back then and find any bookies stupid enough to set a total. I'd bet the fucking over ever night.

The ABA had a couple superstars (Dr. J, Iceman, and Artis Gilmore) but it suffered because they lacked lucrative TV contracts. In the age before cable TV, aside from boxing it was difficult to get any sports on the airwaves, let alone an upstart basketball league that featured scary looking dudes that looked like dope-toking hippies and Black Panthers, which were not the type of fringe images the networks wanted to beam into the household across Wonderbread-eating, milquetoast middle America. With the except of a few cities (Denver and Indianapolis), most of the teams did not draw any fans. Some franchises struggled to get a couple hundred of fans every night. Tickets went for as low as a $1. You couldn't give them away. Which was sad, because the quality of basketball was on par with the NBA, but offered up a more entertaining product with soaring monster dunks and bombs raining out of the sky. Whenever they took a jump shot... the red, white, and blue ball made everyone feel like that had ingested a hit of liquid sunshine as swirling colors were sprinkled throughout the arenas.

I recently finished Loose Balls: The Short and Wild Life of the ABA. It's an oral history and a well-organized collection of remarks and stories from every aspect of the ABA. The multiple perspectives includes players, coaches, owners, broadcasters, and sportswriters, etc.

If you're a fan of the Lakers' girls, then thank the Miami Floridians for their innovation. Instead of ball boys, the Miami franchise used ball girls in bikinis to entice fans to come to the games. They danced during time outs and tried to distract opposing players when they shot free throws. 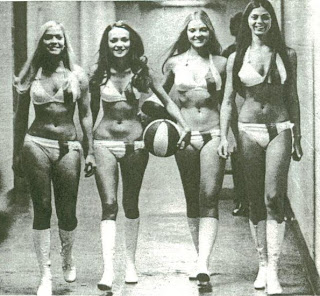 Miami's original "Ball Girls"
During Turkey Day dinner, I asked Nicky's father (who grew up in L.A.) if he recalled any ABA franchises in California. He spoke about the old Anaheim Amigos before they left the O.C. after one season and moved up the freeway to Los Angeles and switched names to the L.A. Stars. The one and only Pat Boone was a minority owner in an ABA franchise in Oakland called the Oaks. Rick Barry played on the Oaks for a year before Boone found out the other majority owners ran up a bunch of debts and swindled him out of a couple million. Word to the wise... don't go into business with shady friends. They will rip you off and then pretend you don't exist! Boone sold the Oaks and paid off the debts, while the new owners moved it to Washington, where it became the Washington Caps.

I vaguely recalled a HBO sports documentary about the ABA that I once watched with my brother. I found it after a ninety second search on YouTube and re-discovered Long Shots, which uses a funky intro from Billy Preston's Circles.


In case you were wondering, my brother and I had a red, white and blue basketball. It held up better in outdoor/playground conditions compared to the nice leather balls that were perfect indoors but got torn up on concrete. At one point, my bro got a Michael Jordan basketball, which was just black and red.

The ABA... gone but not forgotten. The league folded into the NBA after nine rough and tumble seasons. Four ABA franchises are currently pro teams in the NBA: Spurs, Nuggets, Nets, and Pacers.
by Pauly at 11/23/2012 04:20:00 AM