The murky skies over Los Angeles were polluted with smog, helicopters, sirens, and paranoia. The whizzing, buzzing and whirling of copters echoed from above. Three distinct kinds of copters -- military, law enforcement, and news -- created an aerial traffic jam. The manhunt was on. It began Sunday night. Orange County. Parking garage. A couple shot dead in their car. Wednesday night. Boat thief? He tried to steal a yacht in San Diego and flee to Mexico because once you get over the border, then you can disappear forever. After the failed boat hijacking, he drove north and shot at two sets of cops. 1am and first contact was an old-fashioned shoot-out at a convenience store in Corona. At 2am, he ambushed a cop car in Riverside. LAPD went on full alert after the pair of shootings, and they knew their suspect -- a veteran with combat experience and an ex-cop with a chip on his shoulder about getting fired from the force almost four years ago. Detectives had been digesting his 11,000-word rambling Manifesto1, which was posted on Facebook. He promised to wage asymmetrical warfare against the LAPD. The LAPD put out an APB on his grey/blue Nissan Titan. Sometime early Thursday morning in the last bit of darkness before dawn, a patrol car in Torrance shot up a Titan, but it was the wrong Titan. LAPD accidentally shot two Asian women delivering newspapers, and not the 270-pound black man they were hunting. A different patrol car also had an accidental shooting with a wrong Titan. The media got a whiff of the manhunt and accidental shootings, and they sprung into action. Every ambulance chaser in SoCal descended upon the hospital where the newspaper delivery drivers were being operated on (how they lived is a miracle), hoping to cash in on a potential multimillion dollar lawsuit against the LAPD and Los Angeles County. Morning commuters navigating the Los Angeles freeways were made aware of a Blue Alert, and instead of a missing child, all motorists were on the lookout for the Nissan Titan and license plate tag. No one wanted to get shot up, so anyone who has a similar make/model/color truck stayed home and did the smart thing by staying off the roads when LAPD were on edge and amped up with a "shoot first, ask questions later" mentality during the man hunt. The first press conference kicked off at 10am and the media circus began. Most of the city was paralyzed by fear and/or morbid curiosity. The news cycle ran rampant through Twitter, the internet (Americans all over the country followed along with live streams on KTLA's website), and local TV. Someone posted a link to the LAPD radio scanner and thousands of people listened in. During the press conference, the LAPD honchos identified the suspect using three names (media designation for assassins, e.g. Lee Harvey Oswald) and showed pictures of him in menacing military gear. By then every media vulture on the Left Coast had mobilized. News copters lifted off into the now crowded skies about the Los Angeles urban sprawl. 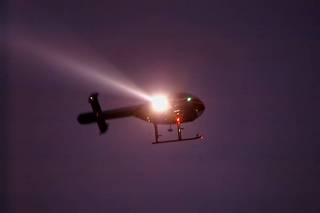 The posse got a tip he was holed up at a hotel outside a naval base in San Diego. The skycams hovered overhead and filmed the Calvary surrounding the hotel, but he was not there. Duped again and the manhunt continued. The next tip was out in Big Bear mountain about 80 miles outside of Los Angeles. His vehicle was ablaze and the ground was covered in a thin layer of snow. The SWAT team arrived and found two sets of tracks in the snow. Was it a trap? Misdirection? They scoured the mountainside racing against nightfall and a potential snow storm. The vet hiding out in the mountains sounded like Stallone's Rambo character in First Blood. The entire story smelled fishy, but compelling like a knock-off of Training Day. Every element was involved. Cops. Bad guys. Manifesto. Media-on-steroids. Celebrities. TMZ. The shit blew up quickly. He event sent Anderson Cooper a package that had a shot up medal and a DVD. It wasn't conspiracy fodder.... Cooper even tweet'd about it. The talking heads pecked away at the Manifesto with all the weird shout outs to celebrities, comics (Lisa Lampanelli appearing on TMZ asking him to turn himself in was surreal), and athletes. Yeah, even the rogue ex-cop sniper had bad things to say about the shitshow Jets like his support for Tim Tebow and a low blow referring to Sanchize as "Mark Rapist Sanchez." Big Bear become the main focus on the Manhunt. If it weren't for this story, the other major networks would be hying up the Snowpocalypse hitting the Northeast. Check points were set up at Big Bear mountain and the air space was shut down. Skycams were prohibited because they had revealed SWAT tactical information. They were after the foot prints in the snow with tracking dogs. Cabin to cabin search. Was he even there? Could he have used the truck fire as a diversion and was halfway to Vegas (where he also had a residence)? Or shouldn't they be looking him at the Redneck Riviera or any of the no-tel motels in Vegas? Or is he laying low somewhere in the City of Angels ready to strike again in the wee hours. The hunters becoming the hunted. When will they call in the drones?


1. The original Manifesto appeared on a Facebook account that was suspiciously only two weeks old and had zero friends. It has since been deactivated. Heavily edited versions of the Manifesto appeared in different forms on the Internet. The Manifesto itself is the stuff that rabid members of conspiracy forum will be deconstructing for decades to come. It reads like a rejected screenplay. Part of it sounds like a farewell suicide note, some segments are devoted to scathing indictments on the LAPD, parts of it share his worldview on a variety of topics including politics, and the rest of it has several pop culture references... particularly a weird reference to Larry David, Tebowing, and a laundry list of women he thought were hot.