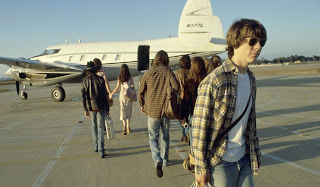 Limbo. It's a tough place. I'm someone who wants to be doing absolutely nothing, or on a path toward something. Life is a journey, but I need to have a journey within a journey in order to feel... inspired. Sounds strange, but I need something to look forward to everyday, otherwise it's pure mayhem and anarchy or shit gets stale and I lose all motivation to do... anything concrete.

The last couple of weeks have been limbo. It's been tough trying to finish off a couple of work projects while staving off childlike feelings of anticipation of the summer.

I always watch Almost Famous before I go on a big work trip for poker, or before I hit the road to follow Phish. It's a fitting film. Heck, it's one of the Top 10 films I'll drop everything I'm doing and will watch it on TV. But it's also one of the few DVDs that I'll randomly watch... and that's not something I do often. I enjoy lushly-written films in which I can identify with different characters at different points of my life. The older I get, the more I feel like the Lester Bangs character, jaded by the rock-biz after it was getting corporatized and how music journalism got co-opted by record labels.

Anyway, that limbo feeling is slowly dissipating and it's almost time to have some fun in the sun. It's been a rather mellow and tame last few months. You can't have the ying without the yang. And vice versa.

Buy the director's cut on Blu-Ray. It's called Untitled and it's roughly 30 minutes longer.

Almost Famous is set in 1973 and is loosely based on Cameron Crowe's life when he first became a rock and roll journalist (while still in high school) covering the Allman Brothers Band and the Eagles. Russell Hammond looks just like Glen Frey, while Jeff Bebe sounds just like douchey Frey.

Lester Bangs offered William Miller an assignment to write for CREEM magazine (a much smaller publication than Rollin Stone). He got $35 for 1,000 words on a Black Sabbath concert. That's 3.5 cents a word compared to 33 cents/word that Rolling Stone paid for features.

The best song in the film is not Tiny Dancer by Elton John, but a David Bowie's cover of the Velvet Undergorund's Waiting for the Man. Don't tell Lou Reed, but it's a much better version.

Man, Philip Seymour Hoffman did such an amazing job with Lester Bangs (in a few cameos) that I wish he'd reprise the roll for a film on the life of Lester Bangs... from the days he was addicted to cough syrup and speed.... to the days he tried to form a punk band in Austin.