Faded Mornings and the Looming Death of Don Draper 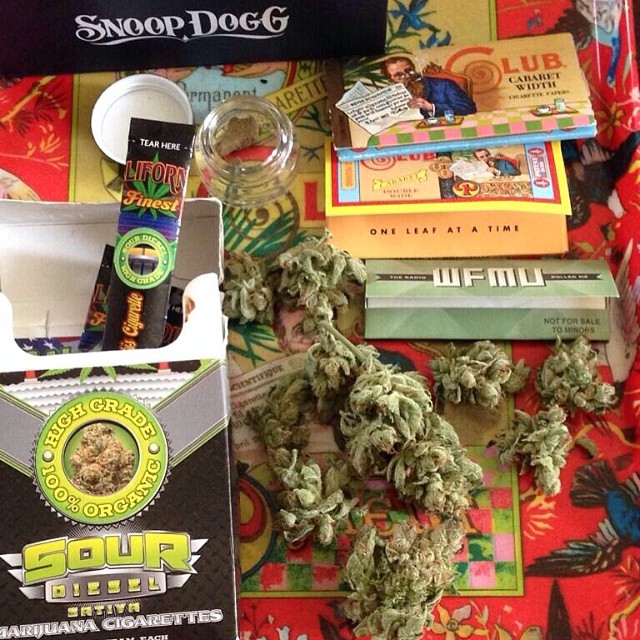 It's been a very long time since I was faded due to marijuana.

Seriously. I usually don't get that wasted on just weed and hash. It's sort of like smoking cigarettes for me. I've built up a tolerance and had to scale back consumption, which is why I don't dabble as much. So when I do smoke, it really hits me.

Fade on weed? It must've been four or five years. Maybe more?

I took a trip to Amsterdam with Nicky and we attempted to visit 12 hash bars inside of a 12 hour period. From noon to Midnight. We hit up a new coffeeshop every hour and smoked at least a joint in each spot. By the time we got home... we were spent. I slept like a rock that night, something that's nearly impossible for a chronic insomnia sufferer. But the overabundance of hashish and weed propelled me into the outer cosmos and made me tired enough that I could get a normal night's sleep.

I always slept well in Amsterdam... and that's because of their hash. I always sought out the strongest. Something so heavy that it hit me like a ton of bricks. So when my head hit the pillow... it stayed on the pillow.

Well, Sunday's festivities rivaled that eventful night in Amsterdam. Sunday was Easter Sunday but it happened to fall on the 20th of the month, which is a holy date for stoners everywhere. Universal  holiday.

We wanted to do something special for Dope Stories podcast in honor of 420 Day, so I suggested a live stream. I had zero experience in that department and it was a half-baked idea more than anything else. But Shane wanted to explore that idea and we decided to go for it. We usually record episodes on Tuesday, but decided to record the newest episode on Sunday to coincide with 420 Day. So we essentially added a live camera to the mix and turned it on while we recorded this special episode.

We aim to have sober tapings of Dope Stories, which means no toking during the show. We took a professional approach because we didn't want the show to devolve into a Cheech and Chong sketch or a Seth Rogan movie. But Sunday was a special day. Heck, 4/20 only comes around once a year. So we figured we would indulge on air and have fun with the weed-infused holiday.

I'm sure a lot of our friends expected Dope Stories would be a podcast about smoking weed... which meant they might have been disappointed with the actual product. We're more than a dozen episodes in and getting high on air is obviously not the emphasis.

After the show ended, Shane left several treats behind, mostly concentrates or hash -- different forms ranging from "finger" hash to full-melt. Definitely tasty and extremely potent. I nearly fell asleep during Mad Men and by the time the credits rolled, I was already crawling into bed... and this was before 11pm at night.

Yeah, I ran out of gas after a full afternoon hanging out with Shane and then an evening toking hash with Nicky. My brain had reached maximum density. I smoked myself to sleep. And it was a deep slumber. Rare, but welcomed.

I woke up at 5am (to write) and I was so spaced out that I stayed in bed another hour waiting to sober up! Man, that never happens. Rare moment indeed.

I've experienced those crazy booze-drenched nights when I pounded so much that I woke up drunk the next morning (which is problematic because that means the hangover is looming overhead). But one of the best things about marijuana is the lack of a hangover. Sure, you might suffer from a little spaciness the next morning, but that's onlt if you smoking tuff. Compared to someone who tied on a big bender of beer, wine, and/or liquor, you won't have any physical symptoms of being sick... no headaches, no hangovers, no upset stomach, no regrets, nadda. That's one of the major benefits of marijuana vs. booze... zero side effects the morning after.

However, I had a rare instance when I smoked as much product (the equivalent of what a reggae band consumes in a night) so I was definitely still faded when I woke up. It really took me twice as long to get moving in the morning. While I was still waiting to re-enter Earth's atmosphere, I re-watched Mad Men to make sure I didn't miss anything from the night before. 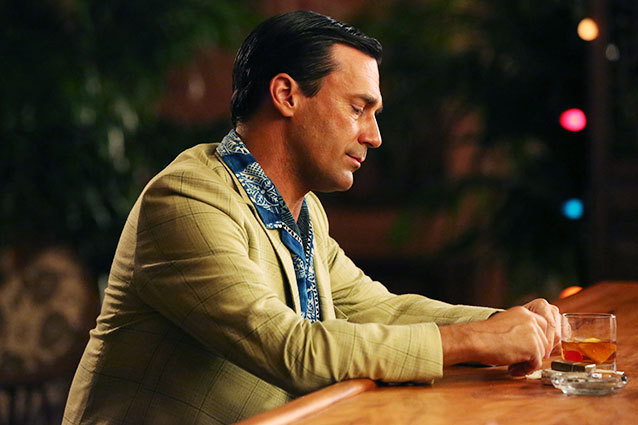 Yep... I didn't miss anything, but during the initial viewing I was so spaced out that I was convinced that I kept seeing ominous signs that Don Draper was going to die before the season ends.

Between Pete Campbell feeling weird in Los Angeles and spouting off about being in limbo (caught in between life and death) and the actual discussion of a funeral (Sally's roommate's mother died), I was convinced we were getting in-your-face clues to Don Draper's future demise. And these weren't clever red herrings that Mat Weiner had used in the past (teasing Pete Campbell's potential suicide, then deciding to kill off another cast member) to fuck with overzealous viewers, but rather, the heaviness of the hash had gotten my mind stuck in a loop. And that loop spelled doom for Don Draper.
by Pauly at 4/21/2014 04:20:00 PM