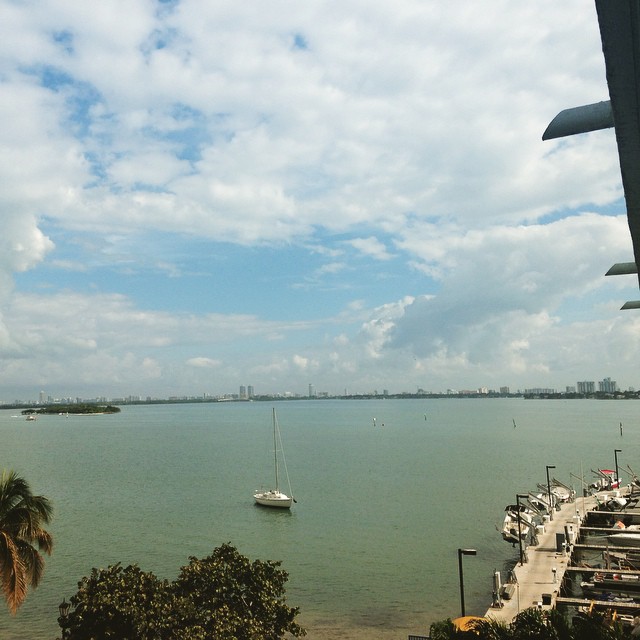 I grew up in New York City, which is a series of small islands off the coast of mainland America. NYC has its own unique vibe and all of my quirkiness is a product of growing up in a melting pot on the fringe of America. These days I currently live in the Republic of California, which might as well be its own nation state that  occupies the western coast of the United States. California has its own unique weirdness unto itself, which is why there are a lot of people living in fly over states that would love to see California break off and sink into the ocean.

Miami? Feels like I'm in a foreign country. Think South America or something equivalent, except there's a bunch of hippie gringos matriculating about. Everyone speaks Spanish down in Miami, which has a truly international vibe. I've spoken more Spanglish in Miami over the first few days of the new year than all of last year in Los Angeles. Heck, I even got to break out a little French to chat with the local Haitians.

Don't get me wrong... my Spanish and French are equally horrible... tres mal and muy malo... but I'm trying to connect with the locals. Hunter Thompson put it best: "Never burn the locals." In order to woo the locals, you have to speak their language... or at the least, attempt to do so.

I nearly failed French in high school, which is laughable and ironic because twenty years later I'd end up signing a book contract with a French publisher. Luckily I had a translator (Benjo) who did all the dirty work and heavy lifting transforming Lost Vegas from an English text to a French masterpiece.

My Spanish is poor. Muy muy muy malo. Growing up in the Bronx, I absorbed Spanglish which is a butchered, rapid version of Spanish from the island nations of Puerto Rico and the Dominican Republic. When I try to speak Spanish with anyone, they shake their heads and resume the conversation in English.

My next big undertaking is to vastly improve my conversational Spanish. You know how I feel about new years resolutions, but I'm someone who jumps into different self-improvement projects every few months. I haven't figured out if I'm going to actually take a Spanish class, or do a deep dive with Rosetta Stone, which isn't cheap. I'll probably soak free classes and lessons via YouTube and elsewhere on the interwebs. Alas, I want to keep up with the massive shift in America, especially the greater Los Angeles area, where Spanish is truly the native tongue. But with languages you really can't study a book. Rather, you have to engage and converse. That's the intimidating part... because no one wants to look like a blathering moron.

Then again, I have no shame.

The cherished moment of every day in Miami is the hour or so when I write on the balcony of the hotel. We have a bay view and can see the shimmering water with Miami Beach in the background and reflecting off the windows across the way. It's often breezy in the mornings, especially when you're 25 stories up in the air, and on Sundays the jubilant church bells echo from down the street. At night you can hear all of the sounds you'd expect to hear from a party town like the screaming, hooting, sirens, and the odd gunshot. And it's Miami, so there's a significant amount of thumping bass polluting the air via cars and open balcony doors from the condo across the street. Sometimes it feels like the bass is stalking you. It's just like the cheesy Gloria Estefan song... "the rhythm is gonna get you... tonight."

Across the hall in our hotel, Wildo has a much more stunning view in his room, which includes downtown Miami in the backdrop. He also has the saddest sight... the old Miami Herald HQ is being torn down a couple blocks away. During the days you can hear the demo crews pulling it apart a little at a time. It looks like one of the bombed out buildings on Kubrick's set of Full Metal Jacket. I couldn't think of a more fitting image that best describes the newspaper industry in America. I didn't want to actually snap any photos because it's too depressing, but it's a haunting image that I witnessed every single day over the past week.
by Pauly at 1/04/2015 10:10:00 AM