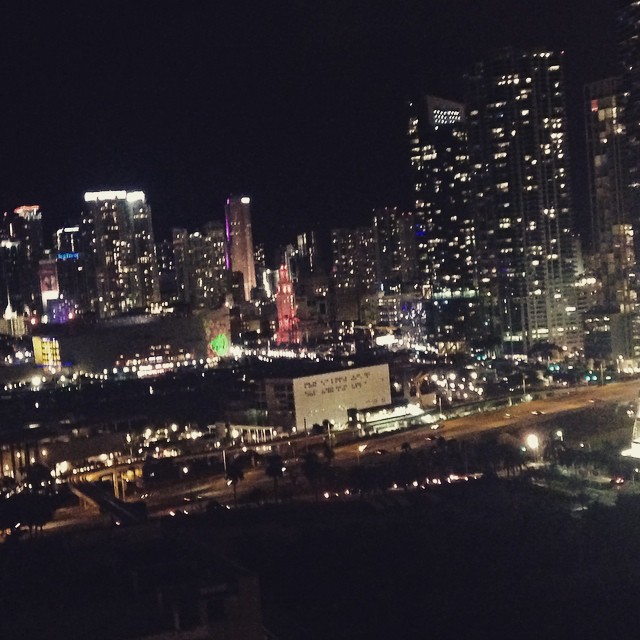 Piper is a sweet soul. She legitimately cares about people, whereas I'm the opposite as a skeptical New Yorker and treat everyone with suspicion. I've come across to many angle shooters in life, so I'm doing "Shady Profiling" on my fellow human beings. It's a self-defense mechanism. It's self-preservation. It's my default mode and it often keeps me out of trouble.

Piper and Nicky were sitting on the balcony of our hotel. We were all admiring the city of lights below. 4am and the city was still thumping in the first few hours of the new year. A small group of party people sat above us on an adjacent balcony. They asked if we had any rolling papers. Piper was being neighborly and helpful and accommodating. She offered to share. She had to tell the kids the room number a couple of times, but for some reason they could not grasp the four numbers Piper shouted.

"If they too dumb or too wasted to remember the room number," said Wildo, "then they don't deserve to get free papers."

The knock happened a few minutes later. I answered the door. Two figures. One very small and the other very hairy and wook-like. The small one had a female voice but I couldn't tell what was up. He/she looked like Doogie Howser, but it was like Pat from SNL knocked on our door. The wook-like creature wore a cheesy, plastic Happy New Years hat on his head. He sported a dinner jacket that was three sizes too big. He could not stop sweating and his eyes were as wide as saucers. Wook-boy was tripping balls.

Piper handed a couple of EZ-widers to the little one. The little one hit me up for weed and acid. I told her I was out of both. You can never trust strangers, especially when it comes to LSD-25. You never know who's the narc or who's the crazy fucker that will shank you in the hallway with room service fork because they thought they were hearing "those voices" again.

"Fair enough," I said, filing the little one's face away. When you go too far off the reservation, you might not be able to find your way back. But this was one zombie I wanted to avoid, especially in Miami, where crazed fuckers are running around naked on bath salts and chewing off the faces of poor tourists who opened the wrong door.

The little one asked me where I'm from. I blurted out "We're from San Francisco. All four of us."

I usually never give a correct answer and will say something like "I'm originally from the East Coast but live out West now." That's very vague. Sometimes I'll say Las Vegas or San Francisco. Sometimes I say "I'm from Canada, eh."

That instance I said "San Francisco" and attempted to make casual conversation by quizzing them where they were from. The wook-like creature didn't budge. He clearly felt uncomfortable with the question. The little one said, "West Virginia... but I live in Oregon now."

When Wildo heard those two words... West Virginia... he sorta freaked out. Initially, he was nonplussed with the two visitors and sipped his vodka drink while playing DJ. But as soon as he heard West Virginia, he sat up straight and wouldn't take his eyes of either visitor. I thought Wildo just didn't like rednecks or whiskey tango Pats, but I kinda forgot that he was once robbed in West Virginia, so he harbors some ill will toward the lesser-evolved meth-addled resident of that fine state.

Someone muttered, "Inbred criminals." It was Nicky, because she was on the balcony looking at the apartments in the condo across the way. But I heard "inbred criminals" a couple of times. I couldn't tell if I was thinking outloud or Wildo was thinking it internally, but attempting a mind meld by trying to send me a clue without alarming our visitors.

That's when the wook-like create scanned the room and spotted four bananas sitting on Wildo's desk. He pointed and asked, "Hey brah, can I have a banana?"

After an uncomfortable pregnant pause, Wildo shrugged his shoulders. The wook-like create was fed... for the moment.

When the little one made a move to sit on the end of the bed, Piper's personal space and "line in the sand" was crossed. She quickly but politely asked our visitors to leave her hotel room. They got the hint immediately and left. The little one thanked us for the papers, while the wook-like creature started chewing on the banana peel as he walked out of the room.
by Pauly at 1/02/2015 04:20:00 PM