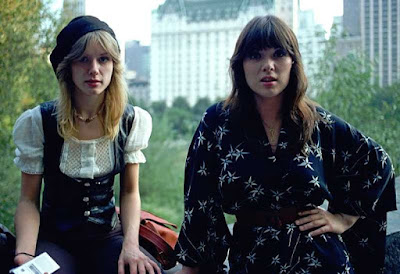 Kicking and Dreaming: A Story of Heart, Soul, and Rock and Roll by Ann and Nancy Wilson with Charles R. Cross

The sisters who founded the band Heart, Ann and Nancy Wilson, had a book on the New York Times best seller list. It's essentially the oral history of Heart told in chronological order with both sisters swapping back and forth telling their story in Kicking and Dreaming: A Story of Heart, Soul, and Rock and Roll.

The sisters were military brats. Their grandfather was a General in the Marines and their father was a Major. They lived all over the U.S. and spent significant time in Taiwan and in Camp Lejuene, North Carolina. There were three sisters in the family and they were all musical in different ways. Heart was formed by the two youngest sisters -- Ann and Nancy. They looked different and each of them resembled their parents. Ann was the husky brunette and Ann was the waif blonde. They both shared a love of music and bonded with each other while constantly moving around. The family eventually settled in the Seattle suburbs where the two sisters went to high school.

As the story goes, Ann fell in love with a draft dodger who was holed up in Canada. She went to go live with him in a hippie commune outside of Vancouver. During those rough, but magical months, she penned several songs that would become huge hits later on in her career. She had formed a band that played in various clubs in Vancouver and begged her younger sister to skip college and join her. Nancy left school and moved up to Canada. She was an instant hit with the band, and they started to make a name for themselves in Vancouver. They got involved in a shady club owner and promoter, but eventually found a decent manager who got them on the road to Montreal, where they had a local hit... The Magic Man.

During the early 70s, Ann and Nancy dealt with tons of sleazy dirtbags that hover around the music industry. A frisky DJ/station manager was the inspiration behind Ann Wilson writing the hit Barracuda. She would later explain how angry she got when Sarah Palin adopted the song during the 2008 campaign, because Palin missed the entire point of the song and just thought it would be cool to be associated with awesome song with a catchy hook and be known as a barracuda.

After the Vietnam War ended, the band could return to the U.S. Like many bands in that era, Heart got involved in a bad record deal. Despite some big radio hits, they didn't reap the financial benefits. As a result, they had to compromise artistically on the next couple. They landed some smash hits in the mid 80s, but the Wilson sisters dd not write them.

Heart had a minor resurgence in the 1980s courtesy of MTV. That's the Heart I remember as a kid. Lots of hair and leather.

I forgot that Nancy Wilson was married to Cameron Crowe. Yes, William Miller from Almost Famous married a rock star! Nancy married the young music journalist that worked for Rolling Stone when he was still in high school. Wilson and Crowe had an intimate relationship that began with him making mix tapes for her. During their marriage, Nancy Wilson assisted Crowe as a copy editor. She read every script he ever wrote and was the first person to see his screenplays as soon as he finished them. They would go through script line-by-line together. Definitely a team effort. Nancy put the rockstar life on hold while she raised a family. Meanwhile, in the early 90s, Ann became the prominent elder for the growing tribe of Seattle musicians. During the height of the grunge era, Ann's house in Seattle became a special place where musicians could hang out and jam out.

Kicking and Dreaming is an oral history of Heart, but Charles R. Cross also got a writing credit. You might recognize Cross's name from numerous books he penned about Nirvana, Kurt Cobain, and the "grunge" scene.

Kicking and Dreaming: The Story of Heart, Soul, and Rock & Roll was one of the first books I read in 2017. When I got back from a 2-week trip to NYC, I was holed up with the flu a couple of days. I read the book during that downtime. As per usual, I spent some time deep diving on YouTube and checking out vintage Heart songs from earlier in their career. I also re-watched Singles by Cameron Crowe. 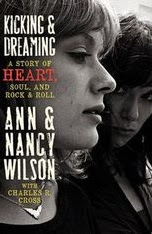