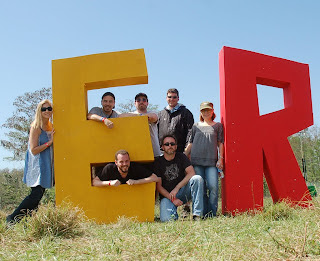 "Are you guys going to see the Disco Triscuits?" wondered Uncle Ted.

The band's name was the Disco Biscuits. The cool kids called them Bisco. Uncle Ted had never seen the band before, I doubt that he's ever even heard a song. He simply liked the name, moreover, he loved his tweakage of the name. Whenever he muttered the words "Disco Triscuits," the spun out kids went into a frenzy. They thought it was the funniest thing on Earth.

"I'm going to see the Disco Triscuits. How about you?"

A group of five of us (Otis, Mrs. Otis, Uncle Ted, the Joker, and myself) slowly made our way back to the RV. It was way past Midnight on Saturday at Langerado. Darkness had set in and anyone who was still up and alive wandering Shakedown Street was in serious party mode. A light stream of people made their way back into the festival for the late night shows, as another heavy flow of people left the music area and stumbled back to the campsites to sleep or party or both.

Four of us wore white tuxedos and we were bombarded with offers to purchase various pharmacopoeia from the dealers that lurked in the shadows of Shakedown Street. The wookies were hawking molly, doses, and rolls. The brothers sold the hard shit like opium, smack, and yay-yo.

The tuxedos got all of the attention. We were easy marks. Walking targets. Every few seconds, someone had a comment about the jacket or an interesting offer to sell me narcotics. Some had both.

Whenever a good looking hippie girl gave us a compliment, I'd say, "Thanks. How about a hand job?"

That rapid response never got old. I must have said it a hundred times all weekend. And it was hilarious every time I said it. Everyone within earshot laughed heartily, with the exception of one whacked out chick who flipped out on me. She got up in my face and said something about sucking the unborn child out of her womb, or something to that effect. She lacked a sense of humor or most likely, she was spiraling into the dark side of the abyss after she ingested a batch of bunk drugs. The campgrounds were flooded with products, both good and bad. It's always a gamble when you deal with entities that skirt the law.

"I have everything that you shouldn't be doing," one dealer whispered as we passed him.

Mrs. Otis said that anytime someone would say, "Molly" that she would shoot back with "Ringwald."

Back at the RV, Uncle Ted put on a show. All he needed was a roll of toilet paper and he was on fire while cracking jokes about Obama and whatnot. I have some of those hijinks on video and will post that shortly. Uncle Ted should get his own channel on YouTube.

After a quick pit stop in the RV, we ingested the last of our inventory and headed back out to see the end of Bisco's set. I missed Matisyahu sitting in with them, but I saw was tight. At 2:30am, Uncle Ted and I bailed. We couldn't find a taxi and walked to the RV. On our trek back to the RV, I held out a $20 bill. I offered spun out chicks $20, or $10 a piece to kiss each other. Sadly, I did not get any takers.

I eventually passed out at 5:30am. The most comfortable spot remaining in the RV was the passenger's seat. It was either that or curl up with Uncle Ted.

I woke up at 8:30am with stifling sun beating down on me. I woke up draped in a white tuxedo jacket. I glanced at the photos in my camera to jog my faded memory. I had forgotten about the disco tent which happened only seven hours earlier.

The rest of the gang woke up and like clockwork, Otis fired up the grill for the last of his breakfast biscuits. Uncle Ted had to leave early. Like a tornado, his appearance was brief, yet powerful, and left a trail of destruction in its path. The gang was slow to motivate to do anything. After three long nights of partying, everyone was spent and whatever energy they had left, they were conserving for Phil Lesh. The crew had lazy vibe and hung out in front of the RV drinking and already reminiscing about the previous night's antics. We eventually motivated to see The Funky Meters. 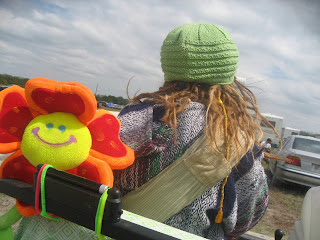 A taxi happened to pass us on the way out of the RV and we hitched a ride. The cute wookette driver asked about the Tuxedos. We decided to wear just the jackets. She said that she recognized us from the previous night. The Joker told her that GRob and Mrs GRob had just gotten married and that we were in the wedding party. As we walked inside, we got more compliments and a few comments from people who recognized us from the night before.

The Funky Meters put on a solid set including their staples Fire on the Bayou and Hey Pocky Way. After their set ended, we left the showgrounds, grabbed a taxi, and went back tot he RV to drink and party some more. We skipped some bands that I originally wanted to see such as Grace Potter & the Nocturnals and Steel Train. I also skipped Gov't Mule and Keller Williams. I had seen them plenty of times before.

We geared up for Phil Lesh and Friends with shots of tequila. Otis found dog tranquilizers, which he gave his dog whenever they went on long car trips. I offered to experiment with them. I figured that two dog tranquilizers would be harmless, but maybe three or more could slow down time in a Quaalude-like buzz and I'd utter witty remarks a la Truman Capote. Or perhaps things would get ugly and I'd get sloppy and pass out face down ass up in the shitter like Elvis. In the end, I didn't get to test out the dog tranquilizers. I think Otis was worried that I'd get too fucked up and stumble off into the Everglades and get eaten by alligators. Alas, for the record, I was more than willing to gamble. Dog tranquilizers would have been the least harmful intoxicants pumping through my polluted body.

We got inside early enough to eat and catch the last bit of Blind Melon. We found a great spot for Phil Lesh on the left side of the soundboard, close to the beer stand and the toilets.

I had not seen Phil's recent lineup, although I heard several shows that they played over the last few months. The addition of Jackie Greene on vocals and guitar gave Phil and Friends a much-needed shot in the arm. Maybe it was adding all the new youthful blood to the mix, including Steve Molitz from Particle on keyboards. His sound mixed in well with John Molo on drums and Larry Campbell (from Bob Dylan's band) on guitar.

Phil Lesh played two sets in his four hour slot to close out Langerado. I've seen Phil and Friends enough to know that they are often hit or miss. I caught dozens of different lineups with Page, Trey, and Steve Kimock, with Warren Haynes and Jimmy Herring, and with John Scofield and Rob Barraco. Phil's recent lineup is one of the most energetic and fluid sounding. I was more than impressed and they surpassed expectations.

At one point GRob said, "Phil is making Michael Stipe look like an idiot."

Its true. Lesh was just a week shy of his 68th birthday and he blew REM away. He joined the Grateful Dead (then called The Warlocks) in 1965 when he was just 25. I'm sure he never expected to be playing forty years later. But heck, even with a liver transplant, prostate cancer, and all the damage that he did to his body from living on the road all those decades and surviving the drug-addled 60s, Lesh still managed to bring his A-game and close out Langerado with a stunning set.

You can download the Phil Lesh show by clicking here courtesy of Archive.org. You will not be disappointed.

Lesh opened with a crowd favorite of Sugar Magnolia before segueing into another Dead classic, Uncle John's Band, which lyricists Robert Hunter had written about Jerry Garcia over four decades ago.

They kicked it into gear for an upbeat Cumberland Blues. Larry Campbell busted out the fiddle for Gone Wanderin' as they segued back into a Cumberland Blues Reprise. They closed the set with a tasty Help On The Way > Slipknot > Franklin's Tower sandwich.

During setbreak, the video screen played some sort of Rock the Vote video. Plenty of musicians from the community spoke like Murph from STS9 and Trey Anastasio. Whenever Trey appeared, he got a few whistles and light applause from the crowd. The Joker kept screaming at him, "Trey, you're a junkie!"

When Murph appeared, the Joker shouted, "Speak like a white boy, Murph!"

After shouting at the video screen for five straight minutes, the Joker said, "I think the drugs have kicked in."

The first hour of the second set was some of my favorite playing in all of Langerado. They opened with a cheerful China Cat Sunflower > I Know You Rider. They followed that up with a smooth version of New Speedway Boogie which took an unexpected turn when they segued into a cover of Bob Dylan's Hard Rain's Gonna Fall.

Lesh didn't write too many songs for the Grateful Dead, but one of his contributions included Unbroken Chain, which they played and for the first few minutes, I could not recall the name of the song. They ended the set with a sizzling Viola Lee Blues. That made me miss Pigpen. It also made me miss Jerry. If he lived for another decade, I wondered how many festivals both The Grateful Dead and Jerry Garcia Band would have headlined.

Lesh encored with Casey Jones, which was an anti-cocaine song written by Jerry Garcia and Robert Hunter and one of my favorite Dead tunes of all time. I was fortunate to see a groovy show. Phil Lesh and Friends was the perfect dessert to a lengthy and luxurious feast of music, which lasted for four days. And, I got to share the original experience with some good friends.

Festivals are never perfect and you encounter a slew of problems no matter how prepared you think you are. Most of the time, you have to go with the flow and make your own fun. The music is just one aspect of the festival. We didn't let the weather or the crappy set from REM bring us down. I caught a few gems like New Mastersounds, Beastie Boys, Thievery Corporation, Dark Star Orchestra, and Phil Lesh. We also got into lots of random hijinks which also enhance the festival experience.

I survived the day without any problems and had a little bit of energy left over. I would need that when we returned to the campground and we engaged in the now infamous ice cooler bet. I had an edge. I was one of the most wasted and impervious to all sorts of pain. For example, my feet didn't hurt, nor did my bum knee after four days of walking, dancing, and running rampant through Langerado. Even the fire ant bites didn't bother me a bit. I was in that rare place where I felt bulletproof. Lucky for me, I didn't seriously hurt myself. Although, I'd get a ton of street cred if I lost a finger due to frostbite incurred during a prop bet with Otis.