David Burke and the Eggman

I'm slowly understanding the addiction to fine dining. I've had the opportunity to chow down at some of Las Vegas' best restaurants over the last year including gems like Nob Hill and Craftsteak and Boa and now I can add David Burke to that list. 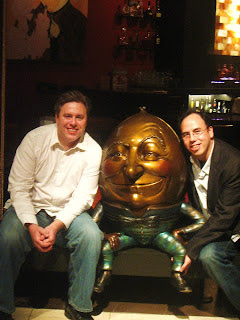 Burke is one of those celebrity chef's that become the toast of the town in Las Vegas. Over the last decade Las Vegas Strip casinos have been slowly amassing a collection of the greatest chef's in the world. In some regards, that's when you officially make it in the chef world... when a Las Vegas casino asks you to open a restaurant there.

David Burke got his own joint in the Venetian focusing on classic American cuisine. Lucky for me, Michalski was picking up the tab. When I saw the menu I knew it wouldn't be cheap so I offered to buy the wine. The wine would come into play later in the story.

We had a nice intimate party of six... Michalski, Nicky, Jen, MeanGene, and Benjo. Since Michalski is also the editor of the Vegas sector Thrillist.com he pulled some strings and lied. He told them he had a huge client (moi) that he had to impress. Because of that, we got a table for eight. We also had a special menu reading from our waiter. He said one French phrase and Benjo frowned. Afterwards Benjo had to correct him on the proper pronunciation of that phrase (which eludes me at press time).

David Burke has an egg theme. There's a Humpty Dumpty bronze statue out in front. I just don't get it. Anyway, Burke's signature dishes include Crisp & Angry Lobster Cocktail which Nicky devoured. There's the pretzel-crusted crab cake and his famous Cheesecake Lollipop Tree.

My only complaint was that it was super loud because of the fountain in the middle. During a lengthy meal of 2-3 hours in length, there's plenty of time for discussion during the different courses. I felt as though I had to shout a lot which I don't like to do in restaurants.

The bread was ordinary, but it was the butter presentation that made it unique. The seasoned butter on a slab of Himalayan salt which gave it more flavor. Reminded me a bit of the deliciousness of a salt bagel with butter back home in NYC.

Michalski ordered a couple of the crab cakes and goat cheese and snail egg ravioli for the table. I tried several of the appetizers including Nicky's Crisp & Angry Lobster which is picture below... 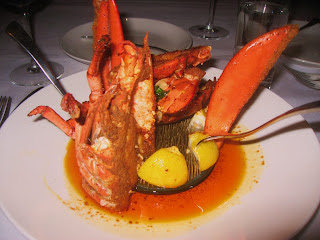 Gene, Michalski and I all went for the surf and turf combo which included a filet mignon and a lobster steak with a chili rub. I wasn't all that impressed with my main course.

We bought two bottles of wine ($90 each) to start and then we found out that it was half-price wine night for locals. That's when I said fuck it and Nicky picked out a $200 bottle of Syrah. Smooth. Delicious. We all polished that off quickly.

The highlight of the dinner was dessert. Although I only had a little, the black forest chocolate cake had yummy cherries. The cheesecake lollipop tree was unique... little bits of cheese cake on a stick and then dipped in chocolate which hardened to form a lollipop. That "tree" got plenty of curious glances from the table next to us. My favorites were the chocolate eggs with cookies and cream ice cream and some sort of fruit carpaccio with mint basil ice sorbet. Holy shit that mint sorbet was awesome. My favorite on the menu. The highlight of the night.

We left David Burke full and stuffed. I prefer laid back casual fine dining instead of the snootyness of some places I've been too. David Burke fits that mold. Relaxed but high end. I enjoyed the company and overall experience over my actual meal. I was sort of let down by my main course. I know that Nicky raved about everything she ordered.