She locked us out of the apartment. Nice move, pothead. I hoped that she left one of the windows open. I scouted out all possible entries and everything was closed and locked. Luckily one of the neighbors had a spare key and he happened to be home. He let us in and I gave Nicky shit all day for being a typical pothead who left the apartment without locking the door.

I usually don't carry keys around, but since the incident, they have been on me at all times. In bed. In the shower. When I take a dump. I won't go anywhere without my keys.

Then again, if I didn't have so much material stuff, there would be no need for a key to begin with? Right?

Speaking of stuff, the number one clothing item that I purchase the most? Boxer shorts. I have two two-plus week trips coming up and need to have enough underwear for 16-17 days without having to do laundry.

On Thursday morning, Nicky's parents went out of town for a trip to NYC and then onto North Carolina to scout out potential retirement possibilities. That meant that Nicky had to house sit and cat sit. Her sister had a new gig shooting some reality show so she was unavailable to feed the cat.

Nicky's father has a grill so we took advantage of the situation and made plans to cookout frequently while they were away. That first night, we picked up a couple of filet mignons which were grilled then dabbled in roquefort bleu cheese. Amazing meal.

When I got home, I got the bad news about blogger/google junta's over-aggressive bots shutting down access to four of my blogs out of suspicion for being spam blogs. Splog? I might regurgitate run-on sentences and stain the universe with my half-baked musings. But a spam blog, I am not. Thousands of other blogs were flagged in the process including a gardening blog by a 70+ year old grandma. She was wicked pissed when the bots flagged her blog. I also found out that AlCantHang was flagged during the blitz by the bots.

I went through the process of requesting review of my websites by an actual google employee. I had no idea how long it would take. One week later or one week earlier, I would have welcomed the break from blogging, but this week was crucial with a new issue of Truckin' and a promotion I'm running over at Tao of Poker.

The entire process of getting a review went faster than expected. I read about some horror stories about it taking up to two weeks for a review. That possibility bummed me out and I self-medicated. There was nothing to do but wait, but I was overly anxious, which was something I never get. Then I got great news early on Friday night that two of the blogs were released. A couple of hours later, google released them all. Free at last.

I didn't worry too much. Even though I own the domain names for www.taopauly.com and www.taopoker.com, those redirect to the blogspot addresses. I had been wanting to host my own blog for the last couple of years, but that was a project that got shelved or pushed aside. I was always too bust to address that issue. Looks like it has become a priority now.

Anyway, on Friday night, we stopped off to feed the cat. As Nicky went to shut the alarm, I opened up the backdoor to let the cat outside. I accidentally tripped the alarm and that fucked up the entire process that Nicky had to go through. She ended up on the phone with the company for thirty minutes trying to figure out how to turn off the alarm and avoid a bunch of gun-toting LAPD cops from raiding the house and tossing us into Gitmo.

On Saturday morning, I cranked out the new issue of Truckin' and tried to sort out the next two issues. I also set my writing schedule for the month. I have large gaps on unstructured time with small trips to San Francisco and San Diego for music festivals and/or Radiohead. And my brother flies out to LA next weekend.

On Saturday, we spent the entire day house and cat sitting. I managed not to trip the alarm. Nicky had a ton of gardening duties to keep up and I played online poker and watched my brother win my weekly tournament. I also watched the Yankees game. They finally beat the Angels after dropping two straight.

Dinner was burgers. Cajun burgers. In Denver, the Joker clued us in on his secret recipe for cajun burgers. They were delicious and I was determined to replicate the flavors. I seasoned the meat with the proper spices and then tossed the fuckers on the grill. It was so simple. 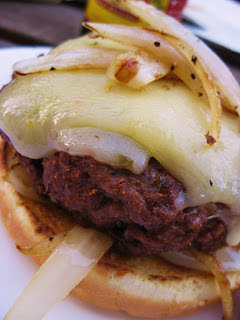 I toasted the buns then lathered them in garlic butter. The burgers were topped with pepper-jack cheese and grilled onions. Nicky made the corn. She found a Bobby Flay recipe and tossed them on the grill. Once they were done, we lathered the corn in garlic butter. The sweetness of the corn and the spicyness of the burgers were a great compliment. It was the best meal I had since I got back to LA. If there's one thing I can cook well... it's a burger.
by Pauly at 8/03/2008 06:08:00 PM