Happy Sunday at the Outside Lands Festival in Golden Gate Park

Day 3 of Outside Lands stood out as the most enjoyable day out of the three day festival. The weather was beautiful in Golden Gate Park for a lovely Sunday afternoon. Friday was hectic and madness. Saturday was mellow and relaxing. And Sunday... was the one of the best days that I had in San Francisco even though five acts that I really wanted to see all seemed to be playing at the same time!

We had a semi-late start to the day and wandered over to Haight Street for some breakfast. We loved the Pork Store so much that we went back again. We sat at the counter and devoured their biscuits and I sat next to a Scottish woman on her way to Burning Man.

We caught a cab instead of walking. That saved us like 45 minutes. I didn't get a pat down, but an old hippie chick was working the security checkpoint and smelled the dank OG Kush that I had hidden in my bag. Initially, she let me through. Then abruptly stopped me as she grabbed my arm. She made sniffing gestures with her nose and pointed at my bag.

"Meet me at set break!" she said as she unfurled a smile and let go of my arm.

I just smiled and walked into the festival. We arrived in time to catch the beginning of Toots & the Maytals. It was a sunny afternoon and perfect weather for happy reggae. Toots played Reggae Got Soul and Louie Louie which got the crowd even more excited. Justin from LiveMusicBlog found us as we chilled out for about thirty minutes before we wandered over to check out the end of The Mother Hips set with Chris. He had a sweet spot on the side of the hill... Schools Side... just in front of the VIP area. It would come in handy for Panic later on.

We walked to the other end of Lindley Meadow for Bon Iver. Say it with a French accent. That sorta means "good winter" in French (actual spelling is "bon hiver" but the "h" was dropped). Bon Iver is Justin Vernon's band. The singer/songwriter from Wisconsin holed up in his old man's cabin in Wisconsin to write the material. I wasn't all that impressed with Bon Iver. It wasn't for me. I preferred the songs where Justin Vernon played acoustic guitar over electric. We drank and smoked and caught most of his set.

We headed back to Chris's spot and hung out for the Drive By Truckers. I dug what I saw and heard and they were a nice warm up for Panic. Good to hear some Alabama accents. Patterson Hood mentioned that he had a blast in San Francisco and thanked everyone who passed him a beer and a joint over the last few days.

We left early to secure a good spot for Grace Potter and the Nocturnals. The girlfriend loves Grace, as do I. We hung out in front of the soundboard next to four girls on a blanket. They had a ton of food including a big bag of Oreos that the Joker ogled. Turned out the girls were Swedish and we hoped that their foreign tongues didn't freak out the Joker like it did during Radiohead.

At one point, a spun out hippie chick wandered through the crowd with a duck on a leash. Yeah, her pet duck. The Swedish girls went nuts and couldn't stop laughing. It was the weirdest thing they saw so far at the festival, especially in San Francisco... the city of the weird. 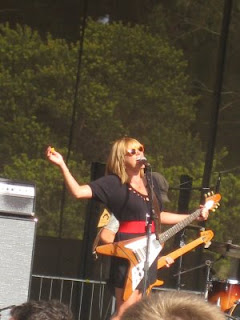 Nice shades, Grace!
GPN started out with a bang. Grace wore the same orange shades as The Joker and threw them into the crowd in the middle of the opener of Ah Mary. Up next were Mastermind > Ain't No Time and Apologies. The highlights were Stop the Bus and Sugar > Paint It Black. First time I ever heard Grace bust out the Rolling Stones cover.

We left at that point to get prepped for Widespread Panic. Went to pee and load up on beverages. We found the crew at Chris' spot and found the guy who gave us the liquid from the other night. We discovered his real name, but had been referring to him as "DeShawn" the entire weekend. For legal purposes, we'll continue to call him "DeShawn"... anyway, he offered me another drop and I respectfully declined because we were doing dippies.

Starting at 5:40 or so... the Sunday schedule became one huge conflict for me. Inside of a two hour period, there were five different acts (Widespread Panic, Wilco, Mike Gordon, Los Amigos Invisibles, and Rodrigo y Gabriela) that I really wanted to see but some of them were up against each other and on different stages on the other side of the park. I made the decision to make Panic my priority since they are one of my favorite bands and I didn't get a chance to see them this summer. My original goal was to see Panic then catch the end of Wilco. I would sacrifice everyone else since we caught Rodrigo y Gabriela and Mike Gordon at the Mile High music festival in Denver last month.

Widespread Panic came on about five minutes late and I assumed that they would run a little later than their alloted 5:40-7:10 spot. The boys opened with a crowd pleaser... Climb to Safety, which segued into Fishwater. The Joker and I were super excited for Henry Parsons. They played one of the recent newer songs Up All Night, which Chris called "radio-friendly Panic." I'm not the biggest fan of
by Pauly at 8/25/2008 02:10:00 PM