The Last Batch of Lost Tao of Pokerati Episodes

During the last few days of the World Series of Poker, Michalski and I taped several episodes of our podcast... Tao of Pokerati. Those episodes were never published... until now... almost six weeks after the fact. Better late than never, right?

There are seven new episodes. My friends Benjo, Grubby, Michele Lewis, Otis, and Mean Gene all made special guest appearances.

My favorite thing about these podcasts are that they are short... between two and five minutes in length. They match our half-baked short attention spans.

So here are the lost seven WSOP episodes with descriptions blatantly cut and past from Pokerati.... 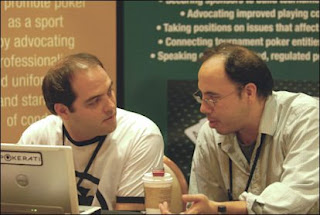 Our sophisticated studio...
Episode 30: The Cost of Donuts (3:19)
Grubby joins the media to talk main event numbers and the price of trendy donuts in today’s oil economy.

Episode 32: French Warfare (5:14)
Benjo takes over the mic when Dan calls in drunk, and he and Pauly talk more about Isabelle Mercier live from the Day 2 killing fields.

Episode 34: Go Team! (2:37)
Dallas' Raj Kattamuri is going deep, and Pauly tracks down Dan in the poker kitchen to find out what it takes to be patched up on Team Pokerati.

Episode 35: No Wiener (4:41)
Benjo is not his usual jovial self as the main event comes to a close and he bids farewell to his American friends in the penultimate WSOP episode of Tao of Pokerati.

Stay tuned for brand new episodes! And you can always visit the Tao of Pokerati archives to listen to all of the episodes.


Original content written and provided by Pauly from Tao of Poker at www.taopoker.com. All rights reserved. RSS feeds are for non-commercial use only.
by Pauly at 8/28/2008 07:06:00 PM