I woke up early on Tuesday morning to write. After a brief session, I packed for my trip. I brought along six dress shirts for a 2+ week assignment. I had four shirts in constant rotation during the WSOP and that was a seven week assignment. I worked for myself this summer and set my own dress code so I often wore t-shirts. I'm sort of working for a casino this time around so I have to at least make an attempt to look normal.

I ran a few errands including a trips to the dry cleaners, drug store, and post office. I popped into the Greek diner for breakfast. I ordered food from there three out of the last four mornings. The usual... bacon, egg, and cheese on a kaiser roll.

I took a Greyhound bus to Atlantic City which meant I had to experience the Port Authority bus terminal. That's always an adventure. Bus travelers are a distinct breed of people. And the souls on the buses to Atlantic City are sometimes even more sketchier.

I sat across from a pregnant white girl with hoop earrings. She had the word "HOOD" tattooed on her forearm. In front of them was a teenaged Puerto Rican girl and her portly grandmother. Within seconds of sitting down, the old woman spilled juice all over the floor. That pissed the bus driver off. He screamed and wouldn't leave until the girl cleaned it up, as she muttered curse words in Spanish underneath her breath.

The guy who sat in front of me could have used some cologne. He smelled like a wet dog and a sour tuna fish sandwich. He looked like he was a step away from being homeless, yet he was headed down to Atlantic City... where the sand turns to gold.

I read about 100 pages of Dark Mission and mapped out the first two rounds of my draft with Senor. The Lamont Jordan Fantasy Football League annual draft was set for 7pm. However, we opened up an early draft via email. Our team, Uncle Jodd's Band, had the 11th pick out of 14 teams. We made the playoffs last year but lost in the semi-finals. The first nine picks were complete before I boarded the bus. Somewhere on the Garden State Parkway, I got a call from Senor. We were up and picked Tony Romo. I loathe the Cowboys, but I figured if I have to see so many goddammed Cowboys games... well at least I'd have something to root for.

Now if we could just drown Jessica Simpson like a sack on unwanted puppies... the world would be a happy place.

I arrived in Atlantic City on times despite leaving ten minutes late. The bus dropped me off at Trump Plaza and I caught a cab over to the Borgata. Part of what makes the Borgata the most exclusive casino on the East Coast is their location... away from the Boardwalk and all the riff raff.

The Borgata put me up in a room on a top floor. 40+ stories up. It's technically an ocean view because I can see out to the Atlantic. I can't see the actual Boardwalk because the cluster of casinos are blocking it. However, I can see the plight pepper below me. It's the void in between the Borgata and the Boardwalk. Somewhere out there, the infamous Atlantic City hookers are strolling the streets that have the same names from the Monopoly game.

I'm excited about the beds. The Borgata beds are the finest in the world. I have stayed in luxury hotels all over the globe... and by far, my favorite beds are from the Borgata. I can't explain why, but for some reason one of the two places in the world I do not have trouble sleeping is at the Borgata and in Amsterdam. I'm looking forward to several nights in a row of no less than 4+ consecutive hours of sleep.

Yeah, I have to work 12+ hour days over the next two plus weeks but I'm doing it with a couple of friends so that always eases the pain of a lengthy assignment. Friedman and Tropical Steve will keep me company (and hopefully sane) over the next two weeks.

I'll be spending 17 nights in Atlantic City. Hard to fathom sometimes, but the Borgata will be the one place that I spend the most time (in one single location) over the next four months... maybe five?

Migration time. When I packed my bags in Los Angeles on Friday morning, I knew that would be the last time this year where I got to call some place "home" for more than a couple of weeks.

Well, the one good thing was the sunset. 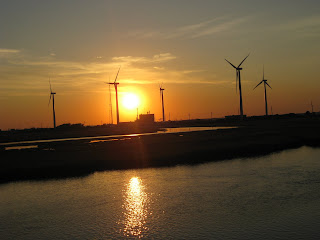 Friedman showed me a chill place outside to hang out where there's a marshland and windmills. Sometimes when you work inside casinos and stay in their hotel attached to said casino, you barely venture outside. I have literally spent several days inside a casino without breathing real air.
by Pauly at 9/02/2008 10:47:00 PM