I was so amped up on work adrenaline that I barely noticed the symptoms. Sore throat. Fever. Aches. Clogged nose. It wasn't until Thursday in Amsterdam when I full realized that I was obliterated by a nasty cold with flu-like symptoms. The Zicam was no match for the invaders.

Alas, I slept so much on Monday night that that abnormality should have been a warning. I logged 9.5 hours in bed. That's more than three times my daily average. Some horrible weeks of dreaded insomnia will plague me with less than double digits of total sleep... so there are several moments every year where I'd kill to get 10 or more hours of sleep in any given seven day period.

"Are you asleep or really fucked up?" The Joker asked.

Both was my answer.

Somewhere during my slumber, The Joker called me to let me know that the end of the world did not happen on October 7th while I was slumped over in a hash house while some bad Eurotrash techno version of a Johnny Cash cover song blasted my eardrums. However, The Joker confirmed that the stock market did indeed tank as the webbots predicted. It was a brutal week and if I wasn't weighed down by a heavy haze, I probably would have freaked out. Maybe it was best that I was in Amsterdam during one of the ugliest weeks on the Street since 1987. But I have solid game plans in place... I gambled that oil would dip before the election and it keeps going lower which is profitable. And gold futures has been very kind. Those are among the reasons why I haven't lost my entire savings in the killing fields.

Nicky was still asleep by the time I woke up on Tuesday. I ran a few errands in the quiet streets of our local neighborhood while she slept off the last bits of her cold. Despite my goal to unplug, I played online poker and went on a heater. Up $400 in a 24 hour span. Actually I played online poker every morning in Amsterdam for an hour or so. It was the perfect time since the Americans/Canadians were at the end of their nightly sessions. I'm fresh while they're not.

Nicky woke up around 2pm and cooked breakfast. We wandered through the Albert Heijin (the local version of Ralph's or D'Agastino's) the night before and picked out a few items. Eating out can get pricey in Europe so our goal was to cut down on food expenses. Of course, everything at the market was in Dutch but I managed to buy bacon and cheese and butter and orange juice. I picked up three croissants (for €1.90) at Kassland and Nicky whipped up scrambled eggs. I nuked the bacon and we made bacon, egg, and cheese croissants. It was a nutritious way to start our day of debauchery. 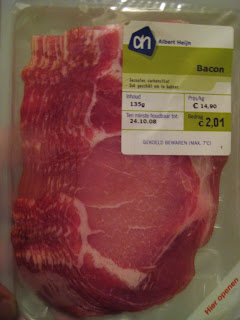 Dutch bacon
We managed to get out of the apartment by 3pm on Tuesday. We improved on our turnaround time Wednesday and left by 2pm. We really didn't do anything out of the ordinary this trip. We avoided a lot of touristy stuff since we have been to Amsterdam many times before. We walked around the canals on quaint streets where the trees started to change color. And our other objective was killing brain cells. Other duties included riding the trams (we scored a tram pass). Smoking tuff in coffeeshops. Having the odd beer at an outdoor cafe while we people watched. We also played a combination of a mixed game poker game... Chinese Poker > Triple Draw > Omaha High.

We hit up our favorite haunts near Jordaan... Grey Area (for unpressed trichromes), Siberie (for their green tea and mint tea), and Amnesia (for the best milkshakes in Amsterdam). We'd eat random local treats like the frites with mayo or waffles drenched in chocolate. I took Nicky to one of my favorite Italian joints near the Leidseplein and even ate at Burger Bar around the corner from the apartment a couple of times. The Kobe beef burger were the shit... but pricey at €9 for the patty minus the toppings.

During the late nights, we stumbled back into the apartment and watched weird Dutch TV programs or really bad sitcoms and hour long dramas that I would never watch in America but happened to be in syndication in Holland. Nicky downloaded the last two episodes of Entourage and I was able to get back into the loop. Man... the shroomin' with Eric Roberts episode was perfect since we were in Amsterdam.

On Thursday we set a goal to visit 16 coffeeshops and break our old record of 13. I think I did 14 one night while raging solo but 16 as a duo would be an epic feat. I was super sick by that point. I could not stop sneezing but sucked it up. I was jacked up on cold medication and who knows what else I could get my hands on. All the freshly squeezed OJ in the world couldn't help my walking ailment.

I was up early trying to get healthy... while Nicky finally dragged her ass out of bed. I played a little online poker and turned a quick profit before I even left the apartment for the day. I cranked out a couple of half-baked Pauly's Pub updates and bought a train ticket from NYC to Rhode Island to visit Senor in a couple of weeks.

We were out of the apartment by 11:30am and was smoking tuff with Willie Nelson. Barney's was the first stop and we ate lunch at Barney's Uptown across the street. Delicious omelete. The next few stops were a blur.... Dampkring (formerly Pink Floyd), Pablow Picasso, Siberie, Amnesia, and Grey Area. We logged six different places before we hopped on the tram to the Leidseplein. We knocked out four more places in that area including Rookies, the Bulldog, Rokerij, and Dolphins.

We walked over to the original Dampkring (that appeared in a hilarious scene Ooean's Twelve) and then onward to Abraxas where they had a delicious strain of Creame Cheese. We were up to twelve when it was time for a dinner break at Burger Bar.

We wandered through the Red Light District gawking at the hookers on our way to The Jolly Joker. We hit up Hill Street at the Market and grabbed frites with garlic sauce. I was on vapors as we headed into the last two places of the night... 420 Cafe and Abraxas II. Nicky was ready to pass out while we sat outside of Abraxas.

16 hashbars/coffeshops complete. Next time we're gonna go for 20! For you non-herb friendly folks that's the equivalent of going on a bar crawl and drinking one beer/cocktail/shot at 16 different establishments.

I slept in on Friday. I was still ill and the 16 places in one day drained all of my energy. Since it would be Nicky's last full day --- we had to motivate. We grabbed lunch at a pasta joint and hopped on the tram which took us to the Van Gogh Museum. That was the only tourist-activity of the trip. We smoked a massive blunt in the park outside before we bumrushed the museum. We brought our iPods and cranked up the music as we toured the various floors of the museum.

I had been there a couple of times almost two weeks earlier and the exhibitions were the same. I was cool with that. I didn't mind viewing the same masterpieces. I focused a lot of 1889-1890 or Van Gogh's last year or so of painting. There's something going on there in his work before he shot himself in a suicide attempt... and I finally noticed that there was one specific element of death or dying that stood out in his last couple of works... whether it was a stump on a tree or a fallen flower from a vase or a wilted vine... he was painting the emotional realization that his talent and passion was wanning. That scared the fuck out of me.

I finally caught my last wind around dinner time. We spent the last night wandering around and smoking and gazing at the girls in the windows. We played more cards in several of our favorite coffeeshops. We ended the overall series with me turning a small profit.

It was a lively Friday night in Amsterdam. Travelers and tourists from all over the planet were getting shitty and celebrating life and running rampant through the cobblestone streets. Bachelor parties from the US. Bachelorette parties from the UK. High school kids from Russia. Some moments, we blended into the crowd of locals and avoided the mass hysteria. Other times, we sat off on the side and smoked and watched as the circus unfolded before our eyes.
by Pauly at 10/11/2008 11:41:00 PM