I'm in Las Vegas on assignment covering the 2008 WSOP final table. Michalski and I taped several episodes of our half-baked poker podcast otherwise known as Tao of Pokerati. 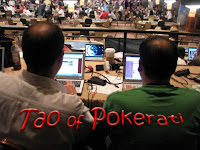 All of the descriptions were penned by Michalski. So, here you go....

Episode 4.1: WSOPenn & Teller (2:04)
Pauly and I are back ... watching the biggest sit-n-go in the history of poker, very live-ish from the Penn & Teller Theater in the Rio. As fans were filing in, chips were being unbagged, and 4 months of semi-hyped anticipation was getting underway, we are nice guys looking to share our observations with you.

Episode 4.2: Root, Root, Root for the Short Stack (3:17)
As action gets underway, Pauly and I check out the crowds and the difference in expectation between Dennis Phillips' and Kelly Kims' fans before debating the name of the whole shebang — November Nine, bleh — while paying homage to Robin Leach and noting that the PBR Rodeo, which is also in town, is going nuts over the chance for a cowboy to win $1 million. Puhlease.

Episode 4.3: Double Up! Double Up! (1:20)
I'm having some trouble with properly title-ing this stuff ... but follow along, as "Book 4" is definitely the event going on here at the Penn and Teller Theater that we are discussing. This time, Pauly and I witness a double-up by Kelly Kim, much to his fans delight, who are suddenly fueled with new hope for a better poker day.

Episode 4.4: Bustin' Outs (2:43)
The action picks up, with Craig Marquis and Kelly Kim busting out ... Kim had some of the best fans, and for Marquis, it's all sickness ... sick to go out when he did, sick to go out how he did, and as a result, he goes home with nada, or at least nada mas. Kim, on the other hand, has an extra $300k ... and we can only assume his friends and fans are out celebrating that achievement.

Episode 4.5: Boo Berry (4:18)
Last Woman Standing Tiffany Michelle shows up and gets an unwarm reception from the crowd, perhaps inspiring her to play up her "bad girl" image? Oooh.

Episode 4.6: Poker Rogue (1:05)
I go rogue to bring you the bustout of David "Chino" Rheem — supposedly the most serious pro at the table, but also the guy with the most serious criminal record. Dude knows how to play hardball, though, as we’ve all seen him on ESPN get hella lucky to get here, and the (unconfirmed) word buzzing around the room is that he was a contract holdout with PokerStars, reportedly threatening not to wear his gear without more money attached to it. To be sure, much of this is just rumor second-hand from quasi-reliable sources, but on Tao of Pokerati — especially without Pauly to keep me in check and Benjo to keep it funny — does that really matter?

Episode 4.7: Pokerstarzistan (2:04)
At dinner break, Dr. Pauly and I discuss Chino Rheem's bustout interview and its political inspiration, along with PokerStars' domination over Full Tilt. (Four Stars players left, one Full Tilter.) In fact, there’s even a rumor we start discuss about PokerStars' intentions to start its own country — which would be theoretically feasible, and would probably have the best prisons.

Episode 4.8: Livin' on a Prayer (4:57)
Upon reaching the Final Four, Pauly coins Dennis Phillips as "Mr. F-in' Rollercoaster", and from there we look at the strategy in play, make assessments of the time (and playing styles) it will take to get to the final two, and officially declare victory for PokerStars.

Episode 4.9: The Novembrists (5:31)
Ylon Schwartz check-raises with nothing into the nuts of Peter Eastgate, and Pauly and I begin the countdown and begin speculating on what two Eurokids (and maybe even Dennis Phillips) will mean for poker/PokerStars... and where poker is in Europe these days. But are Russians dead money or just scary? Maybe a little bit of both? Plus advanced blogging strategy by Dr. Pauly.

Episode 4.10: Ivan Moneymaker (3:29)
Either that or Peter Hellmuth. As we wind down the day yesterday and look forward to tonight’s action, that’s what’s at stake — either we'll have a new youngest main event champion ever, or the Ruskies will have a new national hero. Meanwhile, Dan gets his facts wrong, but does Pauly even care when he can’t see the final f-in table.

To listen to old episodes, visit the Tao of Pokerati archives.