On Tuesday, Johnny Mushrooms flew to San Francisco and Benjo headed down to DC for a day trip. He boarded a bus filled with Italian tourists as he visited our nation's capitol. Derek was at work and Nicky had never been to the Guggenheim. So after a diner breakfast, we headed across the park to check it out.

As we strolled through Central Park near the Reservoir, we saw the lengthy line at the Guggenheim which was wrapped around the block. The Met did not have a line and was much cheaper. I can get us in for as little as $1 a piece. We opted to tour the Met for a few hours. I still had a couple friends who worked there and besides, it is such a massive museum with constant renovations that there's always something new and old to see.

The Oceanic and Pacific Art section was closed the last time that Nicky and I went to the Met a couple of summers ago. It had reopened since then and we spent some time in that section gazing at the canoe room and all the various wooden statues.

We went in search of my friend and expressionist painter Chuck, but he was nowhere to be found.

The biggest highlights of our quick trip to the Met? Shigeyuki Kihara's photography and the Raquib Shaw exhibit. Shaw is actually younger than me. Born in India and educated in London, Shaw painted glittery images that were influenced by Buddhist, Christian, Hindu, and Muslim cultures.

In one of the photographer galleries, I saw the following message... 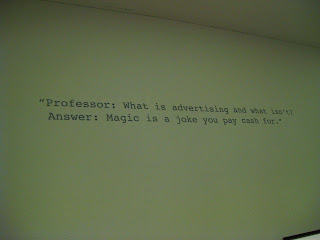 After the Met, we took the subway to midtown. I knew it was going to be a nightmare with the crowds (especially on the cusp of rush hour), but Nicky had never been to St. Patrick's Cathedral and the infamous Christmas tree was right across the street. And yes, the streets surrounding Rockerfeller Center were hectic and congested with tourists who don't know how to navigate through dense crowds.

We spent a little time inside the cathedral which was warm and cozy. We also braved the weather and watched all the mayhem outside around the tree inf ront of 30 Rock including the lengthy line of people who wanted to go ice skating.

We met Derek and the Rooster for dinner at the Palm. It's always a favorite joint of ours to have a nice meal. We were celebrating the end of the year and possibly the end of an era. We all anticipated a much slimmer lifestyle in the oncoming months. The majority of December had been a non-stop party for me with trips to Mexico, Vegas, LA, and New York City as I tried to get a few last gasps of party time before things get tough and tougher and odder and odder.

We migrated to the Westside Tavern for a drink once Benjo returned from his day trip to DC. The tavern served food and included a vast selection of beers. We had no idea that bar was closing. Didn't find out until we saw the sign on the door which explained that they will be closing on January 1st after almost two decades of service. In an everchanging town like NYC, that's an eternity.

If you include Yogi's and P&G... that makes three bars that I frequent withing a four or five block radius on the Upper West Side that is shutting their doors. Where will I find mellow places to drink?

We sat at a large table in the back near the fireplace and the Westside Tavern played tons of 60s and 70s psychedelic rock sucks as Jefferson Airplane, Pink Floyd, and the Grateful Dead. I drank Belgium beers while Benjo told us about his day of sightseeing.

We stayed up late and woke up early to beat the rush at MoMA. We got in line about twenty minutes before it opened which was a clutch move. There was a special Van Gogh exhibit and you had to get a special ticket with a specific time period to see the show. We managed to get in right away. Within an hour or so, the reservations filled up and next available times were late into the afternoon.

My favorite bits of MoMA? Marlene Dumas portraits stood out. The South African artist migrated to Amsterdam and focused on portraiture. There was one gallery that included old faces on baby bodies and lots of dead bodies reminiscent of a crime scene photo. There was a smaller room with almost a hundred of portraits of models, but the painting with the Amsterdam hookers stood out the most. There was one particular one of a window girl that Benjo and I were fond of.

Other highlights included Van Gogh and Mikhael Subotzky. The Van Gogh night colors exhibit was well worth it, then again, we didn't have to fight the crowds to get glimpses of his masterpieces. The Mikhael Subotzky photos in South Africa caught me by surprise. He hung out among the hookers and tagged along with the cops to capture gritty and violent street scenes.

I had forgotten my concert tickets. Nicky and I were staying in the 70s on the West Side and I had to head back to Riverdale solo to retrieve the My Morning Jackets tickets. When I returned, Nicky was fast asleep in the middle of a siesta nap. I joined her for an hour because we had a big night ahead of us.

We had a mellow dinner at the diner and took the subway to Madison Square Garden. There was no line to get through security. There really wasn't any security. As one guy in front of me said, "If this was a Phish show, they'd be searching everyone."

We had pretty good seats in the 100 level and settled in for a bit before we headed to an Irish pub inside the hallways of MSG that was literally steps away. The bar was closer than the men's room. We grabbed a couple of $9 pints of Heineken served in souvenir Knicks plastic cups.

The last time I saw a New Years Eve show in Madison Square Garden was Phish in 2002 during their reunion show. Two years earlier, Nicky and I saw My Morning Jacket play at the Fillmore for New Year's Eve in San Francisco. That was one of my favorite shows from that year and still stands out as one of my favorite MMJ shows all time. With that in mind, I had low expectations and was simply happy to see one of my favorite bands play on NYE. It was a tough choice between Widespread Panic in Colorado or My Morning Jacket in NYC, especially since Panic was heading on hiatus in 2009. Alas, I have seen Panic too many times to count and in the end, the mystique of Madison Square Garden was the trump card.

Nicky got dressed up in a cape that she bought in the Haight during a trip to San Francisco this summer. I didn't wear a tux or a suit. I didn't even go for a costume this year. I figured with Phish returning in 2009, I would have plenty of opportunities to let me freak flag fly high.

The show included a mixture of older songs and selections from their latest album Evil Urges. Since it was New Years Eve, the band also threw a lot of cover songs into the mix and included several special guests including a horn section, Will Johnson, and Nicole Atkins. The covers included tons of funk and soul featuring Sam Cooke, Curtis Mayfield, James Brown, Charles Wright, Marvin Gaye, Kool and the Gang, Dion, and Dolly Parton with Kenny Rogers). 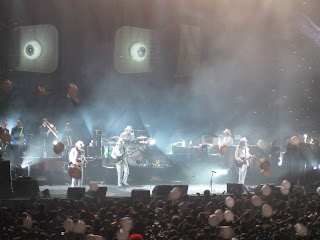 MMJ played for two sets with a short break just before the ball drop. Overall, it was a fun show. The nailed their older material and I'm still getting used to some of the newer songs. The covers were hit or miss with plenty of tight and sloppy moments. I really didn't care about that technical part. I really dug the selection and variety including the addition of horns to the mix.

After the show, we caught the subway around 1L30am without any problems and headed back to the Upper West Side. Benjo had plans with some of his friends and went to a Brazilian and French place down in Soho for the NYE festivities. We met up afterwards and partied very late at Benjo's hotel. It was so small that it reminded me of a college dorm how everyone was packed in and partying it up and hoping not to get busted by the RA.

It was way after 6:30am and the first glimpse of sunlight crepped around the skyscrapers when Nicky and I stumbled out to grab a cab back to the West Side. Plenty of cabs were available, a rarity for NYE. I crashed sometime around 8am and logged twice as much as sleep as I normally get.

I was exhausted and drained and partied out. It had been a long night... a long week... a long month... a long year. 2008 was finally over. Lots of high points. Lots of low points. Lots of blah time in the middle. In the end, I tried to enjoy every day like it would be my last and the most trouble I had was when I worried too much about the future. That's something I need to work on in the upcoming months.
by Pauly at 1/03/2009 08:13:00 AM