I had an acid flashback at 7:21pm PT on Sunday night. I sat in the living room with Nicky as we listened to the New Mastersounds. That's when it happened. 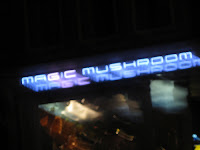 I sorta smirked. Nicky and I have been together for three years and by now she picked up on all my little quirks like an unexpected flashback.

"How many did you get this year?" Nicky asked me.

"That's like one and a half per day. That seems about right. Don't you get flashbacks?"

"Um, I've only done it once. And too bad, because I'd love to have flashbacks."

Ah, the elusive flashback. How many do you get? Sometimes, I string together four or five days without one and then an avalanche of flashbacks will occur inside a short period. I had a welcomed barrage of them during my time in the Bahamas.

And what's a flashback? Sort of peaceful moment like a bunch of butterflies floating by on a warm spring day. It lasts less than a second, but feels like a couple of minutes.

Flashbacks usually invade me on buses. Why buses? I have no idea. Something about the makeup of said bus and how the structure rattles and vibrates on the road. It joggles my mind and I get an instant pulse of memories and experiences about encounters on previous experimentations and leaps of faith. In fact, I had a flashback on the last bus ride that I took a couple of Monday ago when I took the express bus at Grand Central Station to JFK airport. Somewhere under the East River inside the Queens-Midtown Tunnel things got a little bit groovy.

A friend of mine from Seattle told me about something called Hallucinogen Persisting Perception Disorder or HPPD. I thought he was full of shit until I did a little research and well fuck me, there was such a thing. And supposedly one of the contributing factors to HPPD was lack of sleep and high levels of stress. Sounds like me, eh? An insomniac with Hallucinogen Persisting Perception Disorder.

And supposedly, patients with HPPD are treated with prescription drugs... "Benzodiazepines including clonazepam (Klonopin), diazepam (Valium) and alprazolam (Xanax) are prescribed with a fair amount of success."

Ah sweet, so all I have to do tell my crooked mob doctor in Las Vegas that I'm getting wicked flashbacks and lingering back pains after that car accident last summer and he'll hook me up with Lortabs and Klonopin. And now there's a tasty pharmie cocktail. Lors and Klonies. That one-two punch would knock you on your ass. If you take two of each, you'll fall asleep trying to suck your own cock.

OK, but for now, I have to live with my troubling affliction and I'm already in a couple of support groups. I also started a new blog called the Tao of Flashbacks where I will recap my flashbacks using various multimedia devices including poems and claymation.

Here's the thing, I don't have kids nor do things that require a lot of people's lives are in my hands, like drive a bus. Holy shit, that's one job I should not have... bus driver. My entire work would be a magnet for every single psychedelic experience that I ever had. I'd get like 15 flashbacks a day and drive like Otto from The Simpsons.

I did peyote once. Shit, when I lived in Seattle, I tried every possible drug with the exception of crack and shooting heroin. So the peyote? Didn't really work all that much.

I know what I like and know what I need. If there's something new that I'd like to dabble in, it has to be yopo. I'd ingest any exotic South American plants like yopo that makes you see ghosts and be able to converse with dead people and wander around in a haze and babble at spirits in a Mayan dialect.

At some point in your life, the chance to take a walk on the wild side came your way. We all got a little bit crazy due to suburban drudgery and sheer boredom in high school or lots of Grateful Dead or Phish shows in college or maybe at the end of your twenties when you had an existentialist crisis and questioned everything that you did the previous two and a half decades.

I have friends that have high end responsibilities like being soccer moms and BBQ dads and compassionate school teachers and trusted doctors - and they have all done their fare share of psychedelics, if not more than me. Think about that! You never know if your little Sally's fourth grade teacher used to be a total acid freak back in college when she basically lived on the HORDE tour in the early 1990s.

My buddy looked up from his newspaper and a he was greeted by a vivid flashback that lasted no longer than two maybe three seconds.

He unleashed a smile and his kid stopped on a dime and asked, "Daddy, what's so funny?"