Blast Off... Sunday Funday in Hampton

By the third day, we had a general idea of what to expect from the Reunion shows... and at the same time, we were overflowing with excitement for the last and final show of the epic weekend at the Mothership. After the first two shows, the Hampton run had already exceeded anything that I witnessed in the Phish 2.0 era including both IT and the Miami run at the end of 2003. I definitely had flashbacks from 1998 when I Phish smoked the hell out of every single venue they played. 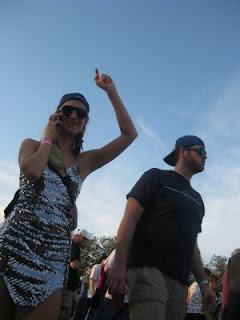 Daphne in search of an extra
Sunday night in Hampton was the gravy. The cherry on top of the sundae. By Midnight Saturday, all of my expectations had been met and I was free rolling the rest of the weekend. I had been relatively sober all weekend... and yet, the music fried my brain. It was much harder for me to write about the shows than I anticipated. I'm still digesting.

I woke up Sunday to a typical scene on Phish tour... bodies sprawled out on the floor of my hotel roo... and people jumping into the shower/bathroom in shifts. While the crew got ready, Nicky and I went to Waffle House across the street. In four days, I ate a total of four sitdown meals... all at Waffle House.

According to one waitress, "The Phish brought in $5 million to local economy. Plus all the court fees from the people thrown in jail!"

They were swamped that weekend but happy for the influx of people with money. I heard a lot of that from the locals. At this point in the economy, everyone needs cash.

When I woke up, three of the five of us had tickets. By the time we left, we had four tickets... and scored a ticket in the lobby of out hotel. And by the time the first set started... Daryl had scored a ticket and got into the show.

We arrived at the lots exactly at 2pm and hung out for several hours. During the first two days we spent most of our time waiting in line as early as 2:30... which we realized was a futile effort... so we chilled out in the Hampton lot near the model homes in the back. Drank. Smoked. Ate. Mingled with other heads including a couple of cool guys from Cape Cod.

The Joker picked up a ton of t-shirts and stickers in Shakedown street, while it seemed as though everyone was looking for a ticket but not one person was selling for anything less than $500.

One guy pushing a stroller offered to sell me both molly or doses. His kid was fast asleep and I wasn't going to judge the guy at all. I mean, he had an excellent cover. How many tour dads would be slinging doses in the lot? But shit, times are tough these days. Phish tour gave everyone the opportunity to earn income in creative and non-conventional ways.

The Joker and I made a list of the songs that we thought they'd play on Sunday night. There were obvious ones such as Slave and Wilson but we wondered about the random bustouts. The one thing I noticed was not what Phish played... but what they didn't play... specifically Sand and 46 Days... which were in heavy rotation for any given Trey Band show over the last few years.

While we stood in line to get inside, a drug dog in front of the coliseum was going nuts as its trainer held the dog back on the leash. God knows how much stuff it was smelling. Sensory overload.

Set I: Sanity, Wilson, Foam, Bathtub Gin, Undermind, AC/DC Bag, My Friend My Friend, Scent of a Mule, All of These Dreams, Maze, She Thinks I Still Care, Army of One, Tube, Cars Trucks Buses, Free, Frankenstein

We had the same spot on the floor as the night... with the same crew... including the South African guys and the Colorado crew. Of course, the Wookie was back and he promised us that he'd be in more control.

My buddies Jay and Josh arrived for their one show. Not everyone was fortunate enough to go to all three nights, so at any given time, someone around you could not contain their exuberance since it was their first chance to see Phish.

First set kicked off with a very-personal story from Trey in the form of Sanity... where he lost his mind a couple of times. I know the feeling. There was a big balloon at the back of the coliseum that was released at the end of the Sanity... before they launched into Wilson!. I missed winning the opener bet by one song. I wagered heavily on Wilson to open the third show.

Yes, Wilson was another high energy crowd pleaser. We had a lot of that over the weekend... moments when the crowd went berserk to hear their favorite song for the first time in 5 years. Bathtub Gin was another example of that insanity and mayhem and jubilation in the first set.

The first curveball of the night included Undermind... which started off a little sloppy and tightened up by the time they completed the debut of the title track from the last Phish album.

My favorite bit of the first half of set one included AC/DC Bag and My Friend. Light and fluffy contrasted with dark and deviant. Phish always had those moments where they could take you far down the rabbit hole. They never went too far off the deep end in Hampton, but we caught a glimpse with My Friend. I got chills when they did the psychotic laughing part at the end.

I wrote a big checkmark next to Maze. That was one of the highest energy peaks of the weekend. Listen and decide for yourself.

The first set had plenty of peaks with a couple of stagnant points such as All of These Dreams and the county song cover followed up by Army of One. Technically speaking, all three songs were executed well... but the energy level on the floor retreated a bit during those songs. It perked right back up during Tube and didn't stop for the remainder of the first set.

The last four songs of the set were among my favorite batches during the weekend... Tube, Cars Trucks Buses, Free and Frankenstein. I'm going to be playing those songs to death on my iPod over the next few weeks.

If I had to give an MVP for the weekend? Page. Our favorite balding piano player absolutely crushed all three nights. Ma, I really missed Page. The last bit of set one was a perfect example of his exquisite playing.

Page stepped out from behind his piano and keyboards and played a hand-held keyboard during Frankenstein as he joined Trey at center stage. The boys smoked the shit out of that cover and ended another powerful first set. 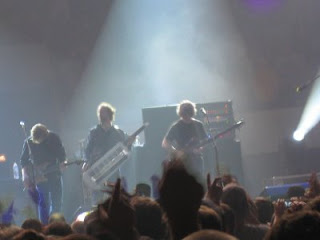 Page during Frankenstein
As expected, Down with Disease opened set two. Tight. Nice improvisation in the jams. Not too dark... but I definitely fell for a 2001 tease. Alas, I was wrong and the bows drifted off into Seven Below. The Joker called that tune.

The Wookie went down hard. When I saw him at setbreak, he looked fine but I guess something kicked in and kicked his ass because he fell to the floor. He's so big that it took three security guards to haul him off the floor. Luckily, he was OK.

I saw a lot of that on Sunday. A bevy of wasted souls. Lack of sleep. Last night to do all your drugs. Sloppiness all around. People seemed in much more control on Friday compared to the sheer lunacy of Sunday.

The second set picked up with an infusion of funk shortly after Twist when they finally launched into a long-awaited 2001. Ass shaking mayhem. Everyone on the floor got down and dirty. And Phish didn't kill the buzz with a cheesy tune and kept up the high energy with MoMA Dance. That one-two punch was the highlight of the set... of the show... and of the weekend. I'll be re-living those fifteen minutes of that night in Hampton for the next fifteen years.

And Phish did not let up with a cover of While My Guitar Gently Weeps. Over the entire weekend, they consistently nailed all of their most popular covers (Loving Cup, Day in the Life, Rock & Roll, Frankenstein...), and they continued that trend with WMGGW.

I didn't pee during Velvet Sea. Page made up for his teary-eyed performance at Coventry. The Joker was ready to leave and he turned around when he heard the first notes to Slave to the Traffic Light.

Slave is my favorite Phish song. Nothing is more special in life when you go see a band and they play your favorite song. Out of all of the disastrous performances of songs at Coventry... Slave was one of the few that they boys didn't completely butcher. However, I only listened to that version two or three times since Phish broke up. And I pretty much stopped listening to other versions of Slave since then. Maybe ten or twelve times total in five years? Can you do that? Only listen to your all time favorite song on an average of twice a year? Well, that's what happened. It hurt too much to listen to any version knowing that Phish was toast...

... until they magically sprang back to life. Fitting way to quell my inner demons when Phish ended the set with my favorite song. I'm glad they made me wait so long. Completely worth the effort.... which included everything that I endured over the last five years specifically the obstacles that I had to overcome to pull off the Hampton weekend.

I had a bet in that the encore would be... Frankenstein > Contact > Tweezer Reprise. Almost. They threw Bug in the middle of Contact and Tweprise.

As expected, all of the balloons fell to the crowd during Tweprise. As they played the last thirty seconds of the song.... all I could think about was that the Hampton performances were what I had hoped Coventry would have been. Alas, what happened... happened. But the boys returned to the stage with a powerful statement and message. They're back and focused on playing to the best of their abilities. That's why I used to follow Phish around all over the planet. I hope that they continue to keep up the pace, energy, and diligence. Because if they do... then you're not going to want to miss a single show from summer tour.
by Pauly at 3/09/2009 03:58:00 PM