Tuesday was Showcase's birthday and he invited us to a dinner party. Originally the theme was going to be sushi, but he called yesterday and asked to change restaurants. There was a new BBQ joint around the corner from his place in West Hollywood and he wanted to try it out. 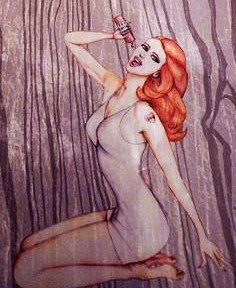 The original Baby Blues BBQ was located in Venice. It was a hybrid-BBQ joint that took bits and pieces from regional styles... Memphis ribs and New Orleans influenced shrimp. Their sauce "hails from the western region of North Carolina."

A second restaurant opened up on Santa Monica Blvd. off of Fairfax. As much as I enjoyed sushi, I knew that BBQ would be a heartier meal and welcomed the change. I found the menu online and got even more excited when I saw that they proudly served sweet tea.

As I penned this post, I blurted out something to Nicky... "How do I delicately describe West Hollywood?"

"Very very gay with fags dancing their way down the street on the way to drag clubs," she said.

"Um, yeah, definitely reminded me of the West Village," I said.

Nicky used to live around the corner from Baby Blues BBQ (when it was a Mexican restaurant) and 7969, the most notorious tranny club in town.

"Drag queens used to roll out of that joint at 6am and piss in my bushes. Thank God I don't live in West Hollywood anymore."

After Nicky parked the car and we walked a block or so to the Baby Blues. As soon as I walked inside, I realized that Showcase arranged his birthday dinner at a gay BBQ joint. Not that there's anything wrong with that.

And yet, the waitresses? Smoking hot. Every single one of them, out-of-work actresses slinging sides of hush puppies and mashed sweet potatoes to a predominately gay clientele.

I ordered the pulled pork platter which came with cornbread and two sides. I opted for mac n' cheese and something called "chicken smoked rice." The cornbread was so greasy that it near slipped out of my hand as I snatched it off my plate. The cornbread featured actual pieces of corn. Made from scratch.

"Too much molasses," said Nicky.

For L.A. standards, the BBQ was above average. For hardcore BBQ fans or snobs? They would probably be super disappointed. The service wasn't great once the place filled up, but that's par for the course in L.A..

During the dinner, we were blessed to have witnessed two random celeb sightings. Nicky and Showcase were going nuts over Leslie Jordan who sat at an adjacent table. He was most famous for his role on Will and Grace, but I had never seen a single episode of that show, so to me, he was just another dude. And the dude was short.

The one person I noticed was Donald Fasion. He and his girlfriend passed by us on the way out. I don't watch Scrubs, but I know he's most famous for being the token black doctor on that show. His most memorable role in my eyes was the drummer in the band at the big house party scene in Can't Hardly Wait.

After dinner, we headed back to the apartment. Nicky watched American Idol while I played online poker for an hour or so at the dining room table. The contestants performed songs from the year of their birth. Man, did that make me feel old. Lots of tunes from when I was in grammar school and high school.

It made me wonder about some of the songs that were on the air waves when I was born. After a little research, I was fascinated with the list of popular songs originating in the sacred year of my birth. Some of those songs continue to be in my listening rotation today... Julio Down by the Schoolyard, Superfly, The Harder They Come, Tumbling Dice, Blue Sky, Old Man, After Midnight, Down On Me, and Layla.
by Pauly at 4/08/2009 04:44:00 AM