Over the weekend, I finished a book inside a 48 hour period. Once I picked it up, I couldn't put it down. That page turner? In-N-Out Burger: A Behind-the-Counter Look at the Fast-Food Chain That Breaks All the Rules.

I'm a loyal fan of In-N-Out burger. I loathe all sorts of fast food, but In-N-Out gets a pass. If you are familiar with the chain, you know why it has a cult-like following... and it's not because of the religious messages stamped underneath their cups or on burger wrappers. Simply put, it's a delicious food. Simple. No bullshit.

Harry Synder, founder of In-N-Out Burger back in the late 1940s had a mottto... "Do one thing and do it the best you can." For he and his wife, Esther, that meant building a tiny burger shack in Baldwin Hills (just outside of L.A.) and focus on making the best burgers in Southern California.

Snyder slowly expanded and did things his way unlike his competitors the McDonald Brothers (and later on Ray Kroc). As McDonalds grew and expanded exponentially, the quality of their food suffered. Add in the fact that their workers are paid slave wages, then you have a recipe for mediocre food and mediocre service. Over at In-N-Out Burger? They get paid some of the highest wages in the service industry. No wonder everyone is in such a good mood when you eat there.

The book discussed the history of In-N-Out and the rise of the family business. When the owner died, he passed control over to his youngest son Rich, who took more of an interest in the family than the older son, Guy, who spent more time drag racing cars. Rich was a devout Christian and implemented the markings on cups and wrappers indicating different scripture versus. The company flourished even more so under Rich's direction as In-N-Out expanded to Arizona and Nevada.

Rich died in an unexpected plane crash and his older brother had to step in. Guy was plagued with drug addiction most of his adult life (stemming from a nasty car crash where he got addicted to pain killers). His stint at In-N-Out was cloudy, at best, and he died of an overdose. At that point, the 80-something year old Esther Snyder, the wife of the original founder and mother of both of her deceased sons, took control of the company. Since it was a family business, the next in line to inherit the massive fortune? Lynsi Snyder, Esther's only grandchild (and Guy's daughter).

Once Esther died, an ugly court battle ensued between executives who had been at the company for decades versus the so-called Burger Princess, Lynsi, who most people close to the company felt as though the spoiled Burger-heiress didn't deserve full-control considering she barely spent her time in the company (as opposed to he Uncle Rich who basically lived and breathed In-N-Out Burger).

The controversial Lynsi Synder Martinez currently controls In-N-Out Burger. She was homeschooled by a devout Christian mother and her current opposition within the current company feel as though religion should play less of a role within the company. When good old Harry Snyder was running the company in the 1950s and 1960s, he didn't mess with those kinds of things and focused on making good burgers.

Anyway, the book is a fascinating read. Of course, with every new chapter all I could think about was.... "I want an In-N-Out Burger!" On Saturday morning, I woke up so famished that I waited until In-N-Out opened at 10:30am. I was there are 10:34am and I as the 9th person served that morning. Yep, I ate In-Out Burger for breakfast.

Nothing beats In-N-Out at what they do. And their simple menu is not the only menu because there's a super secret menu that only their most loyal customers know about (well, that was before the company's website posted their secret menu on the intertubes). It's the secret menu offers up things such as a 3x3 (a triple cheeseburger and my personal favorite), Animal Style fries (see pic below - smothered in special sauce and grilled onions), and Animal Style burgers (which are cooked in mustard).

In honor of the completion of reading the In-N-Out Burger book, here's a gallery of In-N-Out photos from my Flickr account... 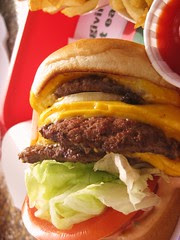 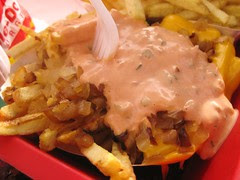 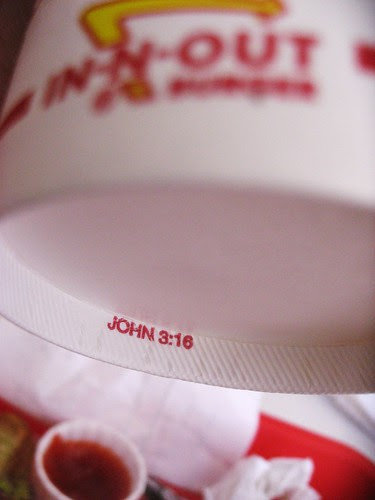 The stamps of Jesus freaks 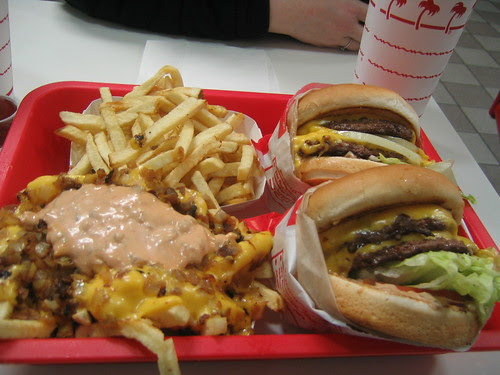