I can already feel the pressure to post here every day while I'm in Las Vegas and not having enough time to do so. I might have to amend my "ten minutes a day" rule and reduce that number to "five minutes a day" because it actually takes twenty to thirty minutes to write, publish, edit, and pimp.

On Monday night, as Nicky and I returned home from Jen's surprise birthday party, we rode the elevator with a guy on our floor and a lady of the night that he picked up. Our condo is already known as Stripper Central, and that was the first run in with a local and a working girl.

On Tuesday, I woke up to the news about Prop 8 in California. Little perturbed by the ruling. A gay friend of mine flew to California last year in order to get married and the good thing is that his marriage will still stand. However, no more new unions for gays in California. What the fuck? As one poker pro stated (and I was a little surprised at his passion for politics), that ruling was a clear violation of church and state since the Mormons in Utah were the power brokers behind funding the campaign against gay marriage. Why Mormons in another state would care about what citizens in another state did with their lives is beyond me. Yet, that's what happened.

Fear the buying power of the Mormons. They just purchased God's so-called will. Horseshit.

Anyway, on Tuesday afternoon, Nicky had a staff luncheon with her company and I got to tag along since it was all-you-can-eat BBQ at Lucille's at Green Valley Ranch in Henderson. Last year, Poker News held their meeting there as well, except there was twice as many people at that feast. They definitely have a reduced staff which is indicative of the times. The poker media has been contracting over the last 12-18 months which reflected both the economy, the anti-gaming legislation, and the ever-waning hipness factor of poker.

The food was delicious as per usual and I got to see some old friends and colleagues who I only see in the summers. In 2007, I had a shitty assignment, but luckily worked with some kids/interns who really saved my ass a couple of times during that brutal assignment for Poker News. Both guys (Dave and Drew) are back with them this summer which is cool because they were top notch reporters. Drew was the goalie for UNLV's hockey team and as we all know, goalies are tough as nails but a little weird. Both traits suited me fine and we got along very well. And Dave, he was my right-hand man. I couldn't have done anything without his loyalty and work ethic. I'd go into battle any day with both guys on my side. The media side of the poker industry is infested with a majority of shitheads, wanna-be poker players, scensters, slackers, and other reporters who couldn't hack it in the real world. However, it was refreshing to meet and work with two guys who really cared about their production. I guess that's why they are still in the industry.

Anyway, on Tuesday night, Michalski and I had a small get together of friends. We went beer bowling at South Point for two reasons... it was close to our condo at Stripper Central. And two, the bar is super cheap. AlCantHang approved.

About a dozen of us gathered and drank in the bar and we picked up two lanes right in front of the bar. Awesome locale and we could bowl and head to the bar with relative ease. Michalski and I had several bets. See the video below for some of the action. I smoked him in both games and it wasn't even close. I also had a side bet with Tom Bostic which I thought I was a sure loser because he posted the highest score in the first game.

Anyway, it was a fun evening and something I desperately wanted since I knew once the WSOP began that those fun times are few and far between. Work always took a priority and as much as I always wanted to stay out until the wee hours drinking and gambling, I always opted to go home early and write until sunrise. Beer bowling doesn't pay the bills, but churning out half-baked assertions of the poker world somehow manages to keep me flush with cash.

Tao of Poker is still a gold mine and I gotta keep digging until all the gold runs outs.

On Wednesday morning, I drove to South Point for breakfast. Nicky went to work out at the gym in our condo. There's always strippers in there and I encouraged her to befriend our neighbors who worked on the pole. Anyway, while she was on the treadmill in between two strippers, I sat at the counter in the cafe at South Point. They have amazing breakfast specials from Midnight to 6am which for as low as $2.95. Since I was there during normal hours of operation, I ate something called the South Point special. It was essentially a bowl of grease.... the bottom layer was home fries or some sort of potato base with onions and green peppers that was lathered in melted cheese and bacon bits sprinkled over the top. And then three eggs any style were tossed over everything. Wow. Talk about a heart attack in waiting. I barely ate 55% of my bowl and vowed to never eat that again. Too much grease.

I headed down to the Rio for the first time this year. It's short of mixed emotions walking into the convention center for the first time. This is my fifth WSOP and some of the best and worst moments of my life since 2005 happened in the Amazon Ballroom at the Rio. It's where I amassed a fortune and carved out a name for myself as a writer. However, it's also a black hole for sanity and the location of some of the most abhorrent actions that you will ever witness.

Walking down the hallways felt like I was wandering through the hallways of high school. Plenty of nostalgia and mixed emotions. Everything that I missed became all warm and fuzzy inside while everything I loathed jumped out and smacked me in the face. Alas, this is what I chose to do in life. It's a massive war and I'm nothing more than a war profiteer and taking advantage of the chaos. Disaster capitalism at its finest.

I picked up my badge and it was good to see old friends. I hung out for a little bit and collected enough notes for an article. Benjo stopped by and wanted to go to Red Rock Canyon. It's my favorite place in Las Vegas and I go as much as possible in order to relax, center myself and touch the rocks. I honestly believe that I write better after I touch the rocks. 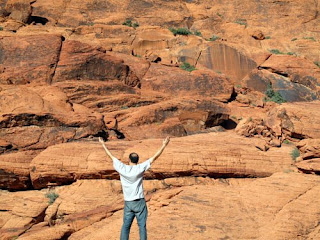 Photo by Benjo
We made a quick hike and I took some pictures. I dropped Nicky back off at the Rio for a meeting while I met the Poker Prof and Flipchip for dinner. We went to an old school diner out of the way that I loved. It's away from the Strip and a hidden gem. Schecky told me about the place last summer and it became a favorite eatery of Nicky and myself. We frequently went there with Mean Gene during dinner breaks.

For dinner, I ate a half-pound cheeseburger served on a French roll. It was one elongated rectangular patty that fit on the bread. Oh, and the bread was actually garlic bread with a patty on top. The burger was lathered in cheese with diced onions. I removed the offensive lettuce and tomatoes. It was so big that I barely touched my fries. After the greasy breakfast and the massive burger, I was stuffed. I need to jog three miles to work off all the grease. I might join Nicky downstairs at the gym along with all of the other strippers.
by Pauly at 5/29/2009 08:27:00 AM