I run good in Dream Team Poker tournaments. Just the other day, I made the final table and took third place in the media event run by Dream Team Poker. There was no money invovled in that freeroll, but I managed to win money that would be donated to the Nevada Cancer Institute.

But on Sunday, Dream Team Poker had their third event... for money. I missed the first one last November but Michalski and I played with Shaniac (a well known online pro from L.A.) for Team Tao of Pokerati at the previous event at Caesar's Palace in March. 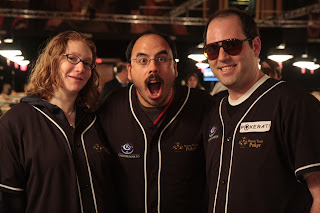 Team Tao Pokerati: LJ, Pauly, and Michalski
This time with Shaniac unavailable and the DonkeyBomber (pro player from Arizona who was our alternate) was still playing in the Main Event, we added LJ to the roster. She had a decent score earlier in the WSOP when she made the final two tables of a HORSE event.

I don't have too much time to go into details, but both Michalski and I cashed and advanced to Day 2 or the final three tables of 27 players. 122 teams signed up or 366 total players. Since we're the only team with two players remaining, the overall team championship is well within our grasps. We both have to make it to the final two tables to win it outright.

I finished Day 1 in the Top 8 in chips with 158K. My highlights included sitting across from a shirtless Tom McEvoy (former WSOP champion) and I also busted Men the Master's wife. And it was cool that Michalski's dad was in town and cheering us on from the rail. He was very excited whenever we won a hand. It was definitely a treat to have Nicky and friends and colleagues stop in and check up on our progress. Thanks for the support.

Here's how Dream Team Poker works.. they split the prize pool and pay out the Top 10 teams and the Top 36 places. They only count the top two finishers per team. We have a great chance at winning it all... 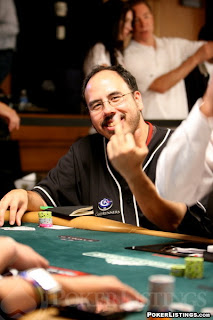