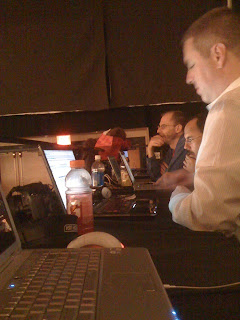 Otis took this pic of us in the pressbox
This pic was taken on Friday when I sat in between BJ and Mean Gene. Today, I'm sitting in between Benjo and Michalski. Even though we assembled "reserved" signs (with index cards and a sharpie), we still had to arrive early to make sure we had a spot. Otherwise, someone from a foreign media outlet will steal our spot. It happens all the time.

Since we sit in such close quarters, we're prone to pick up each others diseases.The dreaded casino crud is going around the pressbox. I started to feel it on Friday and have been fending it off every since. I've been trying to get as much rest as possible. We think that AlCantHang might have contracted the Swine Flu from one of the exotic dancers he had attached to his hip the other night at a party inside a strip club hosted by the magazine that both Nicky and I write for.

While inside the strip club, I recorded two special episodes of the Tao of Pokearti podcast with special guests AlCantHang and Nicky...