The Gorge Part 1: The Arrival

It was going to be impossible to top what I witnessed during the four-show run at Red Rocks. But you know what? Phish threw down at the Gorge and almost pulled off a coup. It was only two nights, but there were moments when the band equaled and even surpassed the events from Colorado. In short, Phish is getting better every night they play, something I noticed from the outset of the first leg of summer tour. My biggest concern was if they could keep up that intensity and consistency for the rest of the summer. The Gorge shows proved that the band could do both.

The music was top notch, the venue is simply breathtaking and spectacular, and our camping crew was tons of fun. We had all the necessary components for an amazing weekend at the Gorge and we're all glad we traveled lengthy distances to get there. Some of our crew drove from Colorado. A few folks flew in from Denver and elsewhere. Change100 and I drove up from Shoreline. Talk about one bitch of a drive and we crashed the night before somewhere in Oregon after a 14 hour driving stint, while our advance team of the Joker, Wildo, and DiscoSis1 arrived at the campgrounds to set up shop.

We finally arrived around 3pm day of the show and set up camp. We brought some of our gear up from LA, while Wildo decided to rent camping stuff from Wal Mart.

"They don't," said Wildo. "I'm just going to return everything on my way back to the airport."

By 5pm, Jonas and Katie arrived via Spokane and there were over a dozen tents, three sun tarps, and five or six vehicles in out little corner of the premier camping area. Everyone was ready to rage, but didn't have much time for an extensive pre-party. We pretty much set up our camp and ate Adderral to get ready for the show. I was lucky because DiscoSis1 hooked me up with a bottle of Vicodin. One of the best thing about tour, is that I can hop on with nothing and leave tour with an entire pharmacy.

As we got closer to the venue, the prices for extra tickets reduced dramatically. It went from $20 in the camp ground to $10 on the walk in. Guys where holding up tickets and saying, "Name your price." I even spotted free tickets left in the fence flapping in the breeze. I was glad that I was able to sell my extras for $40 a piece in the lot at Shoreline.

We found a spot on the floor of the Gorge, Fishman side, near the back and had enough room for like 15 random people from Colorado including the infamous Denver Boyd.

Encore: Slave to the Traffic Light

Wildo and I were gambling on different Phish songs, particularly the set openers. Neither of us picked Down with Disease. They played it at Red Rocks and at Shoreline two nights earlier. It was even on our radar which is why Phish is who they are. They can double up or even triple up and they don't care because it's what they want to play. A heard a few heads bitch and moan about the DWD opener because they saw it already this tour (heck, I saw it three times and I was not complaining). My only criticism was that it was a little too short for my tastes logging in around 9 minutes. I like my DWD dark and dirty and at least 20 minutes of bong-rattling jams.

Ocelot is one of my favorite new songs and I couldn't have been happier. That would have been a better opener. I used to loathe Pebbles & Marbles during the 2.0 era mainly because of Trey's oxy-jams during the song. However, I once heard Trey perform an acoustic version and I was blown away. Since then, I've developed a better understanding of the song and welcomed the Gorge version. Jonas mentioned,"They obviously practiced it because it sounds tight."

Possum was rocking as per usual. Stash had several spooky moments. Destiny Unbound was a sincere treat as the winds picked up a bit and I watched the lighting rig sway back and forth as the last remnants of sun disappeared. 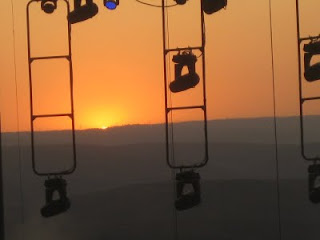 Page left the stage for a few moments because he had to take a piss. Before he could even sit back down at the keys, Mike and Trey had begun the first notes to Sneaking Sally. Listen closely. That's one of my highlights from the entire Gorge run which included a minor vocal jam. It was definitely one of the funkified high points from Friday's show, especially since they followed up with a searing version of Cavern.

The boys brought the funk to open up the second set. MoMA Dance set the tone. I wasn't too thrilled with Light.. initially. However, they won me over with that amazing jam which morphed into Taste. Page was on fire for the first half of the set.Taste included lots of Thelonius Monk-inspired pecking. Fluffhead was fun and fluffy. The Hampton version was technically spot on, but over the last few months, the band is taking a much looser approach to some of their classics, which I prefer. Joy is starting to grow on me, but Dave's critique of the new song was hysterical.

The boys were fucking around when the closed the set with Gin and Hood back-to-back. The Gin jam was one of my favorites this summer. Slave to the Traffic Light is my favorite Phish song. They won me over with a version at the Gorge in 1997 and I've been dedicated ever since. When ever Phish plays Slave, I consider it a great show because they don't play it every night. Nothing is more special than seeing your favorite band play your favorite song. Plus, they treated us to a top notch version, and one of the best I've seen in the 3.0 era.

We headed back to camp for a bit until I got hungry and decided to cruise Shakedown with Wildo and Dave. Yes, it was an impressive Shakedown area, especially thriving at 2am. I never saw the entire thing because it kept going back and back. I saw one wook do a key bump of Special K next to the guy selling Jerry rolls. I bought a nice hand-blown piece for $15 even though the guy wanted $30 for it. I love negotiating in Shakedown. Ironically, at the 2am hour, the drug sales were slow. Everyone kept asking me to sell them stuff. One guy in a NY Yankees hat pestered me for blow as a wookette with a broken foot (in a soft cast) passed in front of me. She was sitting in a baby's stroller while her lot boyfriend pushed her from behind as they navigated the densely packed Shakedown. We ended up going back to camp where I talked about the finest strains of marijuana with a well-known Colorado grower, while one of the kids in an adjacent campground was smoking DMT. I recognize that smell anywhere.

I eventually passed out around 5am only to be woken up by Panda screaming at the top of his lungs at 7am. He was in the middle of an epic bender after pulling off something called The Triple Play. As the Joker described it, "Panda promises to do the triple play this weekend: Molly in the mouth, the nose, and the ass. 'Don't worry,' he says. He washes his fingers."
by Pauly at 8/10/2009 12:38:00 PM