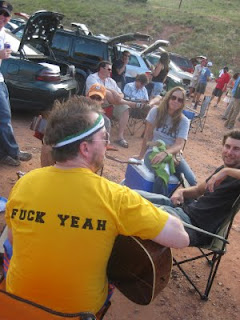 The Joker playing guitar in the lot
Phish closed out their four night run at Red Rocks with another sensational show featuring Grateful Dead's legendary drummer Bill Kruetzman who sat in with the boys for the majority of the second set. As expected, Phish unleashed their heavy hitters along with a couple of new songs and a bust out or two such as Roses Are Free to open. Everything that ensued was pure mayhem. Nothing could have topped the previous night's epic show, but you know what? Phish tried and put on one hell of a show.

We hit up Pete's Kitchen for a late lunch and stumbled into Sanchos for drinks before we boarded the party bus. Larry the driver showed up and we all piled on. This time they only needed one yellow school bus and Charlie gave us his little pep talk before we departed. He reminded us what the Basics Fund is all about (a non-profit organization that raises money for health insurance for artists by providing buses to and from concerts and festivals) and said, "Please don't leave burn holes in the seats like the little kids do."

The Joker resumed DJ duties but it seemed that everyone on the bus was a little spent after three long days and nights of tearing it up. Within minutes of arriving in the lower lot, Jonas and I were approached by a kid from Boulder selling discounted Molly. Half grams usually went for $50 ad he slashed prices to $40 and he offered up grams for $75. Yeah, Sunday in the lots meant a fire sale for illegal goods.

Jonas decided that he was going to mess around with kids in the lot and ask around for heroin. I decided to seek out some black tar myself... just to see if I could. (Editor's Note: We here at Coventry do not condone the use of severely hard drugs like heroin. However, we suggest you look into synthetic versions such as Oxycontin. We found one guy slinging Oxy for $15... or 2 for $25.)

"So do you have any Special K?" asked Jonas.

"Try the upper lot," said the kid from Boulder.

The kid took two steps back and put up his arms, "Whoa! No way man."

"Well let me know if you see any Rainbow Kids," said Jonas.

"Do you have any pharmies?" I asked.

"No. Just some Adderal, but it's my prescription. I can't sell you any."

He opened up his bottle and gave me one pill for $5. I thanked him and Jonas and I continued our search for someone in the lot who was chasing the dragon. We found lots of spun out wooks chasing around tour dogs, and a few girls walking around with butterfly wings, but we failed in our quest to find the few junkies on tour.

I sold a few Dharma patches while the Joker hawked his goods. Katie was giving a few younger fans guff for tossing their empty beers cans on the ground. We ran into Mushroom Dave who scored us delicious and mind-altering chocolates. At the time, PBRs were going for $1 while Aaron scored a ticket for $100. Diggerydos were $10 and one shirtless guy with a wicked Boston accent was pushing whiskey shots.

"Name your price!" he screamed.

The Joker got hassled by the cops for selling t-shirts. Two uniformed cops stopped him to make sure there was no mentioning of Phish on his shirts. They dug into his bag of LOST t-shirts and pulled out one of them.

"Bathtub Jin? What the hell does that mean?" said the perplexed cop.

"Fuck if I know," said his partner.

They gave him back the Lost t-shirt and told him to take it back to his car or he was going to get hauled off to jail. As soon as he walked off, someone stopped him to buy a shirt and a sticker.

We wandered inside via the ramp and ran into a couple of overzelaous security guards. One of them took Jonas' stash and threw it in the trash. We took a few steps in and stopped at a beer vendor. Katie got carded and she protested. The beer guy said that he'd give her a free drink if she was older than him. She showed him her ID and he shook his head because he had to buy her a beer.

Roses Are Free sent everyone into a tizzy and they added a little fuel to the fire with a crowd pleasing Wilson. I lost my collective shit during NICU. After a dippie, the chocoshrooms kicked in and I was faced. Back on the Train included a funk thrashing. Mindy is an admitted Spreadhead but after that tune she was a converted Phish fan. I saw that a lot over the last four nights.

Reba had a smooth jam out and they skipped the whistling part. Beauty of a Broken Heart is one of my favorite Page solo tunes and I dig the arrangement by Phish. Of course, Sample is one of the crowd-sing-along tunes which was followed up by Mike singing one of the new tunes Sugar Shack. Still a little rusty and needs more work. I smoked tuff during Waste and lost my ball sack during Kill Devil Falls.

Louie and his buddy found me at setbreak and the Joker found us as well. We had about a dozen or so of us in the same section and were ready to rage for the second set.

Phish kicked off the second set with another fatty version of Boogie On Reggae Woman that included a jam with a couple of twists and turns. They didn't waste anytime and kicked off YEM. Listen to that jam. Very intense and high energy. Trey was en fuego. Mike stepped up during his bass solo before they unleashed the vocal jam.

Check out the video that I shot during YEM featuring Mike's solo and the vocal jam...


When the lights went swirling around, the crew rushed to add a second drum kit. Billy Kruetzman took the stage for a mini-jam before the band segued into Undermind. Billy would sit in for the remainder of the set including an old school Dead dual drum solos. Fishman and Billy were rattling the skins in order to channel the ghost of Jerry Garcia. Man, I've seen 170 Phish shows and I'd trade every single one of them to see the Dead play at Red Rocks circa 1978.

I peaked in the second set during Seven Below which eventually blended into 2001. Fun version that I had been waiting four nights to see. I was plenty happy to see Nicky make out with Katie. Interesting segue choice from 2001 into Waves before they closed the set with a hard rocking Character Zero where I swear that I saw Jerry Garcia riding a unicorn to the moon.

The first encore tune was a request according to Trey before the noodled off into Bittersweet Motel. Up next was Bouncin' and I was praying for a three song encore because they hadn't played my all time favorite Phish song... Slave to the Traffic Light. And on cue... they played Slave. Talk about the cherry on the top of the sundae to top off another sensational show and top off a monster run at Red Rocks.

Yeah, the boys are back and if they can keep up this pace, they are only going to get better. I dunno if they can ever replicate the Year of the Funk (when Phish achieved perfection) from over a decade ago, but you know what? I could care less. We're here today and Phish is back. I'm just extremely lucky to get to see them and more importantly, see them with some of my best friends.

It's always been a dream of mine to see one Phish show at Red Rocks. I got four shows, which means I had four dreams come true.