Standard wake and bake. Liquid lunch. Load up on party favors. Then a run to the liquor store and we popped into Sanchos for a happy hour cocktail while we waited for the Basics Fund bus. The Joker wore his Fishman dress with an accompanying Viking hat. He was ready to party and as he walked down Colfax Street, he got several, "Fuck yeahs!" And of course he got a few, "What the fuck?" looks from unimpressed pedestrians.

Larry the bus driver from Thursday was not there. His replacement? A short 60+ year old dyke with a crew cut, cut off jeans, a wifebeater, and pink sunglasses. She was full of spunk but didn't really know where she was going, but she was in command of the yellow school bus to take us to Phish at Red Rocks. The Joker took on DJ duties and we headed to the back of the bus to get the party started, except Jonas accidentally spilled the cooler and ice went scattering everywhere. Our old lady driver took off and she was getting down to the Joker's tunes.

As we pulled into Red Rocks, there were two employees ushering us to the lower lots. It was an older woman and and older guy. The woman took one look at the freaks on the bus along with the thick ganja smoke billowing out of the cracked windows while Panama from Van Halen blasted on the speakers.

"Were did these people come from?" asked the woman.

"I have no idea," answered the old guy.

The party bus is an amazing concept because it allowed everyone to get blasted without worrying about driving with intoxicants pumping through your bloodstream. However, we had a slight snafu... the old lady driver said she was leaving with the bus before the show started, but Larry would be back to take us home. Fair enough. The Joker left one of his bags on the bus along with the cooler. Then it started to drizzle.

I split a very strong mushroom chocolate and we slowly made our way up to the stairs, wandering through Shakedown with Wildo. He's a micro-celebrity in the Red Rocks lot and can't walk a few steps without running into someone he knew. We chilled out with Jonas and Gouda, while the Joker hawked his t-shirts.

We got in line much earlier because we didn't have the bus to hang out inside. We had a very light patdown (non-existent) and I don't even think they looked into Nicky's bag. The weather shifted from a light drizzle to a steady rain and we took shelter under one of the trees. At that point the chocshrooms kicked in and Nicky clutched onto one of the trees for dear life. She was even talking to it for a while. Once the rain subsided, we took a walk up to the top to watch all the fans without tickets hike up the side of the hill behind the amphitheater to check out the show for free. We found a good spot in the middle of the top section and smoke heavily until the show started. There were a couple of older Deadheads in front of us and one of the guys pulled out a pill bottle and popped a few Lortabs.

Runaway Jim was a song I used to go batshit crazy for ten years ago, but some reason it doesn't move me in the 3.0 era like some of my older favorite tunes. I smoked up heavily until the Joker's one hitter got clogged. I spent the remainder of the song with a paper clip digging out resin. Fun times.

Chalkdust? It seemed like just any other Chalkdust (in almost 170 shows it seems like I've seen Chalkdust like 135 times) for the first two-thirds of the song until the took off into an unexpected layered jam that didn't seem to want to end. Well, it looked like I caught the best version of Chalkdust since the boys returned.

Bathtub Gin always whips the crowd into a frenzy. It's one of those songs that even non-Phisheads know the lyrics to. Solid version and I was extremely excited with how they kicked off the second night until Time Turns Elastic. I'm not the only one who felt blah about that song. Folks headed to the bathroom in droves while the rest of the malcontent sat down. Nicky and I smoked tough and waited for the second half of the song. She kept saying how it's really three songs that are struggling to be one cohesive one. They definitely need more work on TTE, which definitely brought down the vibe of the set.

Nicky called for Lawn Boy before the show and she got to see Page croon the audience. That's when the winds picked up. Swirling. Fierce. I almost lost my hat and we couldn't puff easily. That's when the rain began... as Phish played Water in the Sky in an attempt to soothe the weather gods. It didn't work because the rain and gusts of wind continued through Faulty Plan. The crew jumped into action and placed plastic over some of the amps while the speakers swayed back and forth.

That's when it was time for a dippie to keep me sane as the rain intensified. The first set ended with a spooky yet mind-numbing Split Open and Melt with some sort of dissonant Mile Davis jam towards the end to send all the acid heads into a frenzy.

Before they could bow and walk off stage, Nicky and I rushed towards the visitor center to wait out the rain. It was crowded. Lots of spun out heads. We grabbed some food during the downpour and watched soaking wet wastrels wandering around in a daze. The visitor's center was like a spa for lost souls who were trying to get their shit together. I felt sorry for one young heady momma who was tripping her balls off while she carried her baby around in a backpack. And then there was the kid with two bloody knees slumped over against a wall while he friend tried to console him. I didn't think they'd make it to the second set. More casualties of war.

Luckily, the rain tapered off and stopped completely when the second set began. A scorcher ensued. Much like Thursday's show, the first set was slightly above average but the second set? Pure insanity. If it weren't for one or two tunes, the second set would have been near perfect.

In Deer Creek, Phish was conscious of the heavy rain and played Drowned. They continued that vibe and kicked off the second set of Friday Red Rocks with Drowned, one of my favorite covers from The Who. On this occasion we were treated with a segue into Crosseyed and Painless. I caught Crosseyed at the last show in Alpine, but this version was funkified with Page leading the charge while he and Mike traded off. Talk about an effective one-two punch (Drowned > Crosseyed) to kick off the second set.

Then there was Joy. Meh. I smoked up heavy and thought that the slower tune killed the frenzied momentum of the set. The Joker welcomed the tune so he could bail for a piss break. And just when I was getting antsy... Tweezer to the rescue. More dippies. Lots of space-funk. I lost my mind a couple of times. CK5's lights were remarkable and reminded me of something they shadow government would do to attract passing UFOs.

They took a step back with Backwards. I actually like this newer (originally a Trey band) tune but thought that the placement was ill-timed. First set would have been a better home for Bakwards. I would have preferred another eight minutes of Tweezer melt-the-rocks funk instead. I rushed to the bathroom and patiently waited in line while one shitfaced guy screamed... "Hard drugs to the right. Alcoholics to the left! Hard drugs to the right!"

He was alluding to the urinals on the left side of the bathroom and the stalls on the right side. Guys were lined up by the stalls to either take a dump or snort a few biker rails of blow in order to shake the cobwebs out of their skulls after that devastating Tweezer.

I got back in time for one helluva sandwich to end the second set... Fluffhead > Piper > Day in the Life. Well, fuck yeah. I'm digging the new segue choices on classic Phish tunes. I wonde r if they sit back stage and say, "Let's pick two songs and figure out a smooth segue between the two."

I never thought I'd see any of those tunes bleed into each other let alone all three squished together. Fluffhead was unfinished as they jumped right into Piper. It reminded of the versions from the late 1990s instead of the frenetic sampling from the 2.0 era. Day in the Life seemed rushed, but I love it when Page sings. They ended the set and I couldn't have been more pleased. The only thing that would have made the set even more epic is if they decided not to play Joy and Backwards and extended the Drowned, Crosseyed, Tweezer, and/or Piper jams.

Of course, we knew that Tweezer Reprise was going to make an appearance, but what would be the song to kick off the encore? I would have dug a Cavern or Llama, but they stuck to a predictable and more comfortable choice of Suzy Greenburg > Tweprise. I dance my ass during the funk throw down in the middle of Suzy. As expected, a very sober Trey was oozing with energy as he jumped up and down during Tweprise. When he has fun, we all have fun.

I slowly made my way out of the venue with my mind blow. Talk about another sensational second set from Phish. We made our way down to the lower lot through the last remnants of Shakedown. Lots of nuggets and headies going around.

When I returned to the lot... no yellow school bus and no driver. Uh oh. The night before we had some problems with Larry the driver who went AWOL. He was supposed to pick us up but we soon discovered that they switched buses on us and we had a white charter bus instead.... except one of the Joker's bags was missing with his Sunday ticket. Despite the bad beat, he plugged in and resumed his DJ role. Gouda finally stumbled onto the bus and he was clutching his leg covered in blood an a three inch gash as the source of the wound.

"I had a ditch fall," he mumbled as Jonas scrambled to make him an ice pack. I prescribed him a dose of medicinal marijuana and told him to drink through the pain. 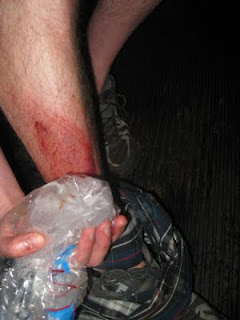 When we finally arrived back in Denver, the Joker lowered the music to thank Larry the driver for getting us home safely. That's when one of the hipster chicks in the front heckled the Joker.

What the fuck? The Joker was providing music for free and she had to complain about his musical selections (which were kick ass by the way). A chorus of boos rained echoed through the party bus. Half of them were booing the Joker's DJ skills while the other half of the bus booed the heckler.

Her Bar is a supreme lesbian bar a few steps away. That's when I rushed to defend the Joker and blurted out, "Hey everyone, hipster chick is buying everyone drinks at the Her Bar!"