I started the week in Seattle, drove most of the length of the Left Coast to LA in the mid-week, then flew out to New York City for a weekend of Phishin'. Just two weeks ago, I was in the middle of a five-day bender in Colorado that I survived somehow. On the heels of the Colorado trip, we had the epic party at The Gorge which was one hell of a journey to get there from Southern California.

I didn't go all out during the previous two weekends (I'd say just 95% balls to the wall) because I was trying to save up a little energy for this weekend. I definitely need it with 3 more Phish shows. My mind had been fried fourteen times over and my body has been put through a meat grinder. Oh, and while all that went on, I was being pulled from all angles while work and life intercede. Ah, and I have a looming deadline... Lost Vegas. Just as this is inching closer and closer, I'm learning who are my real friends are and who was waiting to sabotage me.

Ah, just another day in the life. But my life was much weirder in the late 1990s, especially when I lived on the fringe of society in in Seattle. Nicky got to glimpse into my past during a quick trip to Seattle after the Gorge. She has two friends from high school living there and I had a handful of friends still there after I moved out of Seattle over a decade ago.

We stayed in the infamous U District since I got a sweet deal on a hotel there. Ironically, I lived in the same neighborhood and we even drove past my old house where I lived for almost two years. After the initial glimpse of the house, I was bombarded with flashbacks which continued constantly during my brief time in Seattle. We would drive around and I'd see things that brought back a flood of memories, while most of the time I was sorta lost and overwhelmed with both good and bad feelings. Seattle was where I originally found myself and my voice as a writer. It was an important time in my life when I rejected the life that I was told to lead and flipped my reality upside down. That's when I finally realized that it's my life to live and nobody else's and I started doing things that I wanted to do instead of what was expected of me. In short, it was the most crucial point in the development of me as a writer. Seattle is where I initiated my daily writing workout and soaked up hundreds of books that I had never read before.

Seattle was also tough in many ways for me. It represented the poorest time of my life when I humped several shitty dead end jobs just to make my rent. I lived paycheck to paycheck and sometimes didn't have money for food, booze, or weed. And when I did, I ate PBJ, smoked shitty weed, and drank cheap-ass beer. Luckily, my friends were an amazing support group (like Singer, Ty, and TC). I can't recall how many times they helped me out when I had absolutely nothing. That generosity always stuck with me and to this day, I always try to go beyond the definition of a friend to those close to me.

During our quick trip to Seattle, I took Nicky to Gas Works park. It was lovely for a Sunday with big white fluffy clouds in the mostly blue sky. It was one of those nearly perfect summer days in Seattle (except that you could not see Mt. Rainer). I told Nicky that Seattle had awesome weather for 2-3 months then it was absolute misery for the rest of the year. That would be the only decent day of weather while we were in town.

On Sunday night, we met my buddy TC for dinner. The kung fu instructor/DJ grilled up steaks for us in a delicious multi-course dinner which included plenty of wine. On Monday morning, we ran around trying to squeeze in tourist stuff and meeting up with our friends. I showed Nicky the Public Market on Pike Street and we wandered through the masses of tourists and glimpsed at fresh seafood and other food stuffs. 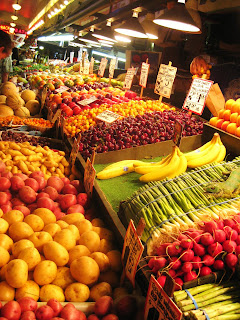 We met Nicky's HS friends for lunch near there. One of them was pregnant and brought her two kids. The other just had a baby and brought both of her wee ones. Yeah, it was Nicky and myself (still a little jiggy from all the party favors I had ingested during the weekend festivities at the Gorge) along with two mommies with 4.5 kids. Her friends were as I expected; down-to-Earth and intelligent women who shunned the SoCal lifestyle and now live in the Pacific Northwest). They had great senses of humor and exhibited amazing patience with the little ones running amuck. I sat in between a 4 year old and a woman breast-feeding. That's what I did last Monday from 90-minutes. And the kid decided to make frozen french fries by taking two ice cubes and putting it on his plate then cutting a fry in half, then soaking the fry in the melted ice before he scooped it up and handed me the soggy fry.

After Nicky caught up with her friends and glimpsed into motherhood, we continued sightseeing. I took her to the Space Needle and the EMP and the Sci Fi museum. I wish we had more time to see both, but we were on a tight schedule. The Muppets exhibit was cool for sure. We rushed over to Capitol Hill so I could show Nicky Traveler's. It's a store with an Indian theme (art, imports, and foods) that an old friend named Leon owned. We were there to meet up with another old work friend, Noonan. Leon made us a batch of Chai tea and we chatted for almost an hour joking about old times and filling in the blank spaces. I could have sat there for four or five days, but we were short on time. I had a baseball game to get to.

Luckily, Seattle is not that big of a city and we were able to get to the ball park rather quickly. Nicky and I got busted by the parking lot attendant firing up a fatty. I tipped him $5 and he smiled. We met Brandon and Dr. Chako for the game. Brandon knows Ichiro's translator so that guy hooked us up with free tickets! It was cool to catch up with Dr. Chako and Brandon and we drank Manny's ale and ate some high-quality ballpark food. That was my first time at Safeco. They were building the new stadiums when I moved away from Seattle.

I knew one of the official scorers. Zeem works for the Mariner's and he was sitting in the press box and we met up with him when the game ended. After the game, Nicky wanted to have a drink at the Blue Moon, a dive bar near our hotel in the U District. I told her that famous writers and poets used to hang out there like Tom Robbins, Dylan Thomas, and Allen Ginsberg. It's a true dive and we played a round of Trivial Pursuit, which we changed the rules and turned into a drinking game.

We woke up slightly hungover and then made the arduous journey from Seattle down I-5. We ended up somewhere in the middle of the state after making great time through Oregon. We had dinner in Medford and there was a tweaker who caused a scene in the restaurant. Man, Oregon is full of old people and tweakers.

We crashed at a tweaker hotel somewhere near Nonwhere, CA. Before we pulled off the highway, we noticed two cops cards had pulled over a pickup truck while a drug dog was inspecting the vehicle.

We eventually got into LA around 4pm on Wednesday. I had less than 20 hours before my flight to NYC. I knew the routine. I emptied my bags, did laundry, re-packed and squeezed 12 hours of work into 3 hours even though I'm supposed to be on vacation.

I want to write more and more about Seattle and the long drives with Nicky and the hijinks at the Gorge and tell you 10 crazy drug stories and about my flight from Burbank to JFK, but I'm short on time. I have to drive to Hartford in a few hours.
by Pauly at 8/14/2009 09:55:00 AM