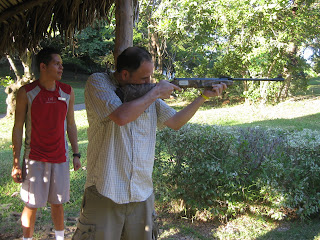 Life is significantly better since the last time I posted. Shooting guns had a little something to do with it.

I finally feel like I'm on a vacation. I know that sounds weird, but even when I'm following Phish -- it's work since I'm taking notes on a future book. So even though I might be camping out in the middle of nowhere, I'm diligently at work.

I've been to so many countries over the last four or five years that I lost count. Most of the time I'm there for work with a day or so here or there for my own personal amusement. Sure, I'm a freelancer and that's an advantageous life, but I also own and operate my own websites which helps pays the bills and funds my lifestyle. Even when I'm taking time off -- I'm always on a working holiday. It's hard not to put in a couple of hours of work in on the road -- no matter what country that I'm in. That's the major drawback about working for yourself and owning your own business... you can't phone it in and have a slack day and more importantly, you're always working. My job is 24/7.

The last time I actually had any semblance of a "vacation" was New Zealand in January of 2008. Since then, I've been longing for the time when I can finally say... don't bother me. The frustrating thing is being pestered when people know I'm on vacation. I dunno how many hints I have to give on the blogs or Twitter, but some people are just selfish. You have no idea how infuriated I got when I'm trying to deal with the airline after my shit got stolen -- and then I'm getting bombarded with work-related solicitation emails. Ah, that passive-aggressive bullshit... "I know you're on vacation, but..."

But what? Go fuck yourself. Leave me alone Do your own fuckin' homework.

Some day, I'm just going to take off. For good. I've been working my ass off over the last five years like a monkey on the grinder to make enough money so I can say Fuck You to the assholes and douchebags in my industry and finally go off the grid where no one can find me. I think that will be the point when I'll finally unleash my best writing... because I'll have no one bothering me because there's no possible way to reach me.

I really wanted to unplug while I was in Costa Rica. Of course, I haven't fully but I definitely spent less time handcuffed to my laptop and spending most of my time outdoors. Heck, when I'm writing (late nights/early mornings) I'm doing the majority of that task outside on our balcony while listening to the critters (raccoons and monkeys) in the tree line across the way.

Having my power adapter to my Crackberry stolen was the best thing for me, well at least I'm trying to look at the positives. Because I'm in "ration" mode with little juice (and those fuckers at Blackberry make different plugs for different phones. I have the newest version and none of the older versions adapters fit), I'm not paying attention to my cell phone. Most of the time, it's locked up in a safe.

It's an odd, but freeing feeling to wander around without a link to the outside world. For the first time in a very long time... I felt free and finally off the grid.

Last night, I wanted to plug in and found myself checking in on friends' Twitter feeds (Daddy, Iggy, Lori, Whit, GMoney) who went to see Phish in Cincy last night. Man, talk about a smoking show. I skipped out on those two shows in Ohio and opted to take a holiday in Costa Rica instead. After my first 6 hours in Costa Rica, I was miserable (shaking off the flu, newly acquired stomach bug from something I ate in Miami, and the off-kilter reaction to finding my shit stolen) and regretting my decision to come down here.

At this point, I'm glad that I made the trip. Plenty of new writing material, plus I made a key business contact with a local sports book. Also, I always worry about Otis, so I try to keep him sane and cheer him up during the down time. I freaked him out the last two evenings when I picked the exact meal he would get off of the dinner menu (Italian and Asian-fusion).

"There's something to be said about our bromance."

I just know Otis' culinary tastes. Nicky? I failed to correctly guess her main course on both nights.

I befriended a group of cool Costa Ricans from my other travels on the poker tour. Those guys (and gals) are cool as shit and did everything possible to make sure that Nicky and I are having a good time.

Last night we found myself drinking with Brazilians into the wee hours. Those cats are hysterical and taught me a few more Portuguese phrases.

Nicky and Otis are working 10+ hour days and they also have been putting in a few hours after their shifts working back in the room. Shit, Nicky has been holding down two jobs here and she's been a workhorse. The good thing is that I have been able to have dinner with them every night. It's been the same "dinner for five" featuring your hero, Nicky, Otis, Shirley and her boyfriend Sos.

Shirley is a poker pro from L.A. and she was here "working" which means she was playing in the tournament. I was excited when I heard that her boyfriend was tagging along. I met Sos last year during an event in Mexico and we hit it off. I had someone to pal around with at the resort while everyone else was working.

Shirley was put up in the swanky section of the resort which came with a full service butler. Every morning Sos tells the dude to hook us up with reservations at the restaurants on the property. Nicky and I don't have a butler, but we do have 24-hour room service (all inclusive) so it's kinda cool to pick up the phone and get whatever you want... at now cost... aside from a $1 tip. Before I left the States, I did my best to horde small bills for tips.

Heck, I haven't even used an Costa Rican Colones since my arrival... except to pay off a gambling debt to Otis when I whiffed on a round of lime tossing. We were drinking on an outside deck that overlooked a lake. On the other side of the lake was the golf course. I had to throw a lime across the pond and make it land on the green. I missed by a few inches.

During the days, I have been relaxing and enjoying my time off the grid. Wow, I finally shook my addiction to Twitter which is something I desperately needed to do. Sos and I hung out at the activities center during the afternoons. We played pool and there are these college-age kids who get paid to play games with the guests. That's the coolest job at the resort. The two locals shot pool with us then challenged us to a match of ping pong. Sos and I took on the Costa Ricans. I quickly learned that it wasn't just a fun match. Sos is a highly competitive dude (formerly military man who played some football in college) and he was a pretty sick ping pong player. Luckily he was my teammate because I was the weakest out of the four. On our first day we ended up tied 2-2 in matches. We couldn't finish a tiebreaker because we signed up for one of the afternoon activities... rifle shooting... and one of our ping pong opponents was also our instructor.

A bunch of us headed to the shooting range for target practice and a tournament. Sos is a former Marine sniper and gave me some valuable tips. Of course, he nailed a can on his first attempt (stay tuned for the video) and went on to win the tournament. Me? I tied for last place with the only female in the contest. Plus she was from Canada. There are no guns in the Great White North, so I lost to someone from an unarmed society. Sos and company gave me a lot of guff over that.
by Pauly at 11/21/2009 02:17:00 PM