On Monday night, I ate dinner with Trisha Lynn. I owed her big time for helping me write recaps of the Amazing Race for Tao of Poker. She suggested Otto which was nearby her office. It ended up being perfect since I'm a fan of Mario Batali, especially after reading Heat.

The menu was right up my alley... Italian food and pizzas. The main dishes are cheap ($9 for plates of pasta) but Otto generates their cash with all the pricier appetizers, wine, and desserts. We went for an assorted batch of meats that included... Prosciutto, Lonza, Coppa, Testa, Salumi, and their house Prosciutto.

I didn't know what to pick out as far as cheeses go and Twitter came in handy. I was short on time and asked the twitterverse for advice. There's always going to be one or two knuckleheads who are extremely unhelpful but for the most part I got wonderful feedback, especially from some people who I trust when it comes to culinary decisions. The consensus was the aged Peppercorn goat cheese and a few folks suggested the Tellagio. Those were two of my choices. The third? Some sort of Gorgonzola Dolce. They give you tiny plates of fruity dipping sauces. The honey was my least favorite and the cherries/Gorgonzola combo was a stellar one-two punch.

I'm not the biggest bruschetta fan, but they subbed the tomatoes for an eggplant and mint combination. I gave it a whirl and it was impressive and spicy.

I had no idea what to go for with regard to the wine. I had to consult the sommelier for suggestions. We told her our cheese selections and she found us a couple of quartinos. I shot down her first suggestion but jumped on board with a less fruity selection.

Trisha went for the pizza which is the house specialty. I heard about their sweet sausage dish and opted to take a risk especially since the dish contained escarole which is a leafy green thingy. I don't dig on veggies but couldn't pass up the garlic and sausage component of the dish. It was more edible than I thought and not as tart or bitter like other cooked greens. I ate about 50% of the greens and devoured the rest of the dish. 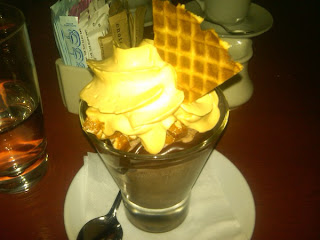 * * * * *
I have only slept well on two nights since I returned from Costa Rica. One of the nights in LA, I had a relapse of the swine flu and knocked myself out with flu meds and Xanax. I slept for nine hours. In Albany, I crashed hard after the first Phish show. I was on some heavy dosages of pharmies which floored me and enabled me to sleep. I actually forced myself to wake up to write and edit videos, otherwise I could have raced towards double digits.

In NYC, I haven't been sleeping at all -- staying up very late and waking up at the crack of the ass to write, run errands, or do stupid family shit. I have been trying to take a nap for days and did so last night. I crashed for two hours then couldn't fall back asleep. I tossed and turned the rest of the night. Yep, my nap was longer than my actual slumber.

* * * * *
Nicky arrived on Tuesday evening. She had not been back to NYC since the beginning of the year when we spent NYE in the city. She was excited to visit some of her "flamboyant" friends in addition to tagging along with me for three Phish shows at MSG.

Our original plan was to reduce expenses and stay with my mother... but that ended up being a pipe dream. She unleashes a fit of rage during the holidays and after a major blowup on Thanksgiving, I had to scramble to find alternative housing since my brother's studio is too small for the 3 of us. Alas, I found a cheap budget hotel on the West Side and snagged a last minute deal. I'm not happy that I have to spend money to stay in NYC, but the way I'm looking at it -- I'm spending the money to NOT have to deal with my insane mother.

I checked into the hotel and spent all of Tuesday walking around the city. I missed that. I got super stoned and fired up my iPod mini which I specifically purchased to use on subways and walking around music. I had uploaded all of the Phish shows from this fall tour that I did not see -- so I could catch up on what I missed out. I started walking from the Upper West Side and ended up in the Flat Iron District. I passed by many familiar landmarks and discovered many news ones along the way. i sidestepped slow-moving tourists gawking at the skyscrapers, while I did my best to avoid the cumbersome holiday shoppers with oversized bags full of shit they don't really need to buy in the first place.

I met up with Bruce after he got off work and before he headed out to Brooklyn for band practice. We shot the shit, caught up, and I grabbed an iced tea from Starbucks. I guess since it's not the season for iced tea, they were out and had to brew up a fresh batch which took five minutes. Well, actually it took ten and the young kid behind the counter (who looked 14) apologized and gave me a coupon for a free drink.

I hopped on the subway for a few stops and walked along Broadway and then over to Riverside Park. I missed the casual stroll. Something I never do in LA. If I'm walking around the slums of Beverly Hills -- it's because I'm actually trying to work out or I'm stuck on a writing assignment and need a change of scenery to jog my brain.

* * * * *
Derek worked late so he met Nicky and I for dinner at one of our favorite eateries... Big Nick's... which has some of the most delicious burgers that I have ever devoured. 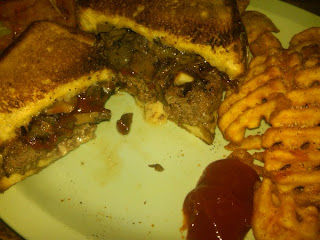 On our walk back to our place, I stopped off at Hot N Crusty. It's an old West Side institution (at least the first time I went to one was on the UWS almost 20 years ago) and we grabbed a couple of Black & White cookies. They were giant cookies and I only ate half of mine. The other half helped fuel this writing session as I finished off the rest of the cookie as the first pieces of light scattered through the cracks in our blinds.

* * * * *
Some one must think that I'm a drug dealer. I got an errant text message. Someone named Scotty thought that I was Alex his drug dealer. He had gotten a new phone according to the text and that's probably why he misdialed. The guy used a code... Eggs.