Show #188. As the Miami run gets deeper, the crew stays up later and later like famished vampires, which means we see less and less of the Florida sun. We took a bit longer to motivate, but we managed to grab grub at The Filling Station (delicious burgers where the hot waitress went to the same school as me) before we partied it up in the suite and four of us played a quick poker tournament. I was the first to bust. Benjo went out in third. Nicky was the runner up, while Wildo came from behind to win the Phish Fried Miami Poker Open.

It was Hawaiian shirt day, our theme costume, and we headed to the lots and parked in the same spot as Tuesday. Good folks around us including one fellow handing out Adderrall. I headed to the Shakedown to sell Dharma patches. The scene was mellower because of the lack of tanks and more undercover cops. But I knew that was temporary because the inmates eventually take over the asylum. The Joker set up shop and we ran into Ruben from Partyin' Peeps.

I had an awesome day sales wise. Cash sales plus several interesting trades. Seems like everyone had product to move and I was bombarded with offers to buy an encyclopedia of pharmacopoeia and other illicit wares. Roxys. Morphine. Klonapin. Headies. Fingerhash. And enough Yay to keep Akron lit for a month. One strung out whiskey tango chick loved the Joker's LOST tshirts. She didn't have any money but offered to trade her methadone for a Hurley shirt. The Joker declined. He had gotten a verbal warning from cops to scram and pack up his vending table. "I don't make the rules, I just enforce 'em."

Once the sun set, the tanks trickled out and a few ghetto birds patrolled the air. I got an email from my buddy Gil in Brooklyn who wondered about the swirling Lady Ga Ga rumors of sitting in with the Phish. Turns out that Jesse started those rumors -- which meant it wasn't true. Just another one of those Phishy mindfucks.

We sat Fishman side of stage about 20 rows back. The Joker and Strawberry Shortcake upgraded to behind the stage. For the first time, the 300 and 400 level sections behind the stage were opened up. The sections were previously blocked off.

The signs were out in force. Walls of the Cave. LaGrange. RocketMan. Birds of a Feather. Tela. Peaches. Which one would they play?

Set 2: Sand, The Curtain With, Lifeboy, Back on the Train > Velvet Sea, HYHU > Love You > HYHU, Free, Boogie On Reggae Woman, Antelope

Set 1 kicked off with a Marley cover... Soul Shakedown Party. I usually place a high value in the opening song. If they go the safe route (like AC/DC Bag or Jim) then you know it's gonna be a vanilla show. But if they throw you a curveball, you can expect a night of delicious weirdness.

The first bustout of the show? Jesus Just Left Chicago. Gritty blues. Page tearing it up. Then it was Mike's turn to shine with a hick-inspired Dixie Cannonball. All I kept thinking about was Smokey and the Bandit.

Benjo and I were gambling on the setlist again. I had picked Stealing Time from the Faulty Plan and it was the only one I'd get correct. He would improve his lead when he nailed two more songs.

After a thrashing Faulty Plan, the boys followed up with a gentle Corrina which makes all the Phishy chicks wet and damp. Keeping with the bustout theme of the show, next up was the ambient vehicle What's the Use?. I'm a fan of dissonant static and loved the ambient jams of the late 1990s.

Unexpectedly, the elusive Tela appeared. The crowd erupted. Tela had not been played in 11+ years and Phish threw the Gamehendge nerds a sympathy fuck with a tasty Tela.

The Joker's reaction? "I hope this means that that asshole will stop screaming Tela in between every song. Teeeeeeeeeeeellllllllllllllllla! Jesus, shut the fuck up, man!"

Tela segued into Gone, another debut before they embarked upon a high-energy Rocky Top. Strawberry Shortcake had been waiting to hear that since her first show in Knoxville. She was born in Knoxville and a huge UT fan, so the song has sentimental value. She used to perform karaoke versions of the song in malls when she was 8 years old. She got bruises on her knees from jumping up and down and banging them on the seat in front of her. Sometimes, I love it when my friends get to hear a song that they adore and have been waiting to hear. Glad that Strawberry got her song.

The capricious set ended with an overpowering one-two punch with an inspiring Chalkdust Torture and a pounding David Bowie,l which put a sense of normalcy into the quirky start that included a little bit of everything. The set was an Everything Bagel. I'm not saying that I didn't like it, just that the set seemed rough around the edges. I enjoyed the bustouts but the set lacked cohesion and smoothness.

Second set opened with a feverish Sand. Just a 13-minute version but intense. Thrilled to hear it since it's fallen out of the rotation. A group of five Paris Hilton clones in designer clothes and hand bags wandered by with cocktails. They seemed severely out of place at the show and I wondered how much coke they had stuff into their bras.

Another bustout. Lifeboy. Slow Phish. Gave me a chance to smoke up before a ground-shaking Back on the Train. Miami fried funk. The jam delved off the deep end into a daunting ambient jam as they wandered off the tracks. 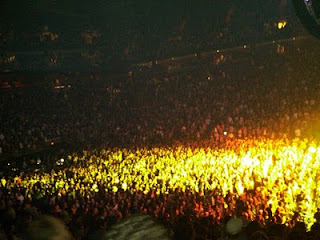 Crowd during Velvet
After a lull with Velvet Sea, it was time for Fishman hijinks. The crowd was whipped into a frenzy with the first bar of HYHU as Trey jumped on the drums and Fish stepped up to center stage. He alluded to Trey's comment about Fishman's last vac solo of the decade was the other night. Alas, Fishman decided to have someone in the crowd play the vac.

He was looking "for someone dressed like me" and for a brief moment I expected to see Lady GaGa step out in a Fishman dress, but instead Fish pointed to a scruffy-looking fellow in the front row with a t-shirt that resembled his dress. The kid named Rich could play a mean vac and Fishman even handed over his coveted instrument. Talk about a serious souvenir.

The last three songs? Insanity. A barrage of ass-shaking music. Rocking Free. Funkified Boogie On Reggae Woman. And a fierce-driving Antelope which included several Boogie On and Roses Are Free teases.

The Frankenstein encore was something I had been waiting to hear again. I just love that cover. Fishman thrives on the drum solo and Page gets to feel like Trey for a song as he jams out on his keytar.