I woke up sick. Nasty head cold. I thought it was "Vicodin withdrawal" but I know the difference these days between the common cold and losing my mud because of the lack of pills. I did what I could to boost my immune system, which was odd, because I spent most of Tuesday morning compiling notes for an article about germs and poker rooms.

Since it was my last morning in NYC, I decided to hit up the bagel store and the Greek diner. I got myself an Everything bagel with extra butter and the usual breakfast sandwich, which I washed down with Dr. Brown's Black Cherry soda. I'm not a soda drinker, but I friggin' love Black Cherry soda.

My uncle drove me to the airport. All he did was bash the Yankees (he's a Mets fan) and couldn't stop ragging on the latest three-team trade as we listened to the Mike Francesa show. He gave me $100 to bet on the NY Mets to win the 2010 World Series. I wanted to book the bet myself -- since it's a suckers bet -- but he wouldn't let me. He's convinced the Mets are gonna win and he's gonna collect $2K.

The JetBlue terminal at JFK airport played non-stop Christmas music. That drove me nuts. I finally knew what it was like to be a Jewish person around the holidays. When I was a kid, society waited until the week before Christmas to start the bombardment of Christmas music. I had to tune it out and listened to Widespread Panic instead.

The airport was not crowded for a Tuesday afternoon. No line for security. That was a shocker.

I bought a sandwich from the Boar's Head Deli. No line either. Loaded up on snacks for the flight; coffee cake and a piece of chocolate poundcake. I devoured the poundcake before I even walked over to the gate.

I played online poker while I waited for my flight. I usually run good at JFK airport. This time, the internet was spotty and it cost me a few pots. The youngest DiscoSister was sweating me during an off-performance. I lost $50 but was stuck a shitload more!

I got good news about one of my assignments... shorter length than I expected. The piece is not done and is already twice as long. It's better to run long than come up short. On another assignment, I got some not-so good news. Nicky read a first draft and told me it wasn't up to snuff. I had to re-work a few things. The note was... "be more funny"... um, shit.

My brother attended a Christmas Party at the Yale Club while I flew to California. Funny thing is that he's going to arrive in Las Vegas before me -- even though I left one day earlier.I told ya, I fucked up this leg of my trip.

My flight was 6.5 hours because we had to do an end around all of that crappy weather in the Midwest. We actually flew north to Buffalo and flew over Canada to get to Southern California. No wonder my flight took so firggin' long. Luckily there were only 3 empty seats on the entire flight... one of them was in my row. I had the aisle and there was no middle seat.

The young lady across the aisle in the row in front of me is an exec at a well-known shoe company. I know this because she was writing work emails on her laptop in a HUGE ASS FONT. I now know her work email and everyone else in her department. Guess what? They make their shoes in China or Mexico and then ship them to the US, Canada, and the UK. I got all that as my eyes wandered over her shoulder.

I watched almost four hours of Paranormal State... a bunch of college kids from Penn State who are ghost hunters. They work with a psychic and try to solve haunted houses and shit like that. Kinda spooky. At first I thought it was real, now I'm starting to think it's semi-scripted. Who knows. I definitely believe in many weird things that might make your head spin. Ghosts and ETs are among those things.

I had a wicked headache the entire flight. There were not one, but two screaming children within earshot (even through the Bose headphones). I wonder if the headache and kids have anything to do with each other?

It was chilly when I landed. 42 degrees. I dunno if I have ever experienced colder weather in SoCal. Luckily I was prepped for the weather. Nicky picked me up at Bob Hope Airport. As I waited, I scoffed at the Christmas music being pumped outside. That irked me. Bah hum bug.

Bob Hope Airport was my 10th airport in less than two weeks. If I weren't driving to Las Vegas this morning, then I'd say that Las Vegas would make airport #11.

Nicky drove me to In & Out Burger in Hollywood. I missed that local comfort food. When I got home, I noticed a bunch of packages. Christmas came early this year. I got a couple of cool Phish pins and there were two other surprises.... 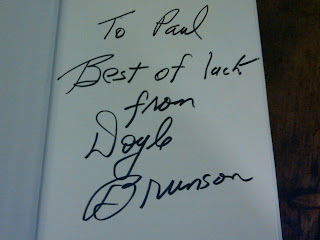 I'm friends with Doyle Brunson's publicist and she hooked me up with an autographed copy without me even asking! I'm very jaded in the poker world. I despise and detest it most of the time. But I gotta say, that was a pretty fuckin' cool thing that Lara did for me. Thanks so much, honeypie! You rock.

And not to be outdone, Drizz sent me... beer in the mail. Seriously. 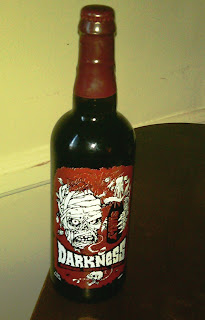