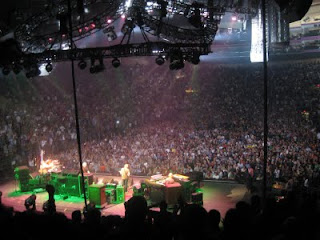 View from our seats
Show #182. Madison Square Garden is the location of my birth. Not in a life sense (I popped out of my mama's womb somewhere in New Jersey in the early 1970s), but in a musical sense MSG is my birthplace. As a 15 year old kid barely wet behind the years, I witnessed the Grateful Dead play at MSG in 1987. That was my first ever Dead show and life has never been quite the same since that magical night. I have been a Deadhead ever since and MSG became an integral part of my mystical journey through music.

When Phish announced their reunion in October of 2008, all I could think about was if/when they returned to MSG. The last time I caught Phish at the historic venue? Reunion 2.0 and NYE. It was a sloppy show in retrospect but an evening that I'll always remember. However, deep down I was wishing and praying for a Phishy MSG show when they were "on" and at the peak of their abilities. Yeah, I thrust a ton of pressure on Phish's shoulders for their return to New York City. But shit, they love a hectic challenge otherwise they would not have scheduled a three-night run at MSG.

Mr. Fabulous was the only one of the Cincy crew who made the MSG show. He witnessed that mayhem and what many Phishy pundits (that's a polite way of saying Phish nerds and geeks) considered the pinnacle of Phish 3.0. They have played six shows (not including NYC) since then but have yet to re-capture that Cincy magic. Alas, the bar has been set. Can the boys replicate the energy of Cincy? That's something we're going to be holding them up to for the rest of the 3.0 era... or until they can surpass that highwater mark.

Small crew at this show. Bruce (the Dead guru) suggested we hit up his usual pre-MSG show hangout otherwise known as Molly Wee's Pub. Mr. Fabulous joined us, but Kid Dynamite got a little lost along the way. He had 8 400-level seats to unload which he did at wholesale prices. At $20 a pop, he was practically giving tickets away. As it happens with Phish shows, Kid Dynamite got super wasted and we never connected during the night, however, he did send a barrage of text messages from the nosebleed seats.

Molly Wee filled up fast with heads due to no lot scene at MSG. Seventh Avenue in front of the Garden was "ticket alley" but unlike in smaller cities and towns, the Phish scene was unable to take over Gotham City. Since MSG is located above busy Penn Station, all of the heads went unnoticed by the teaming numbers of commuters going home after a long day at work. yYes, no lot means zero Wook Factor.

The bars along 8th Avenue ended up the hot spots. Every bar was packed with phans spilling over outside on the street. Entrepreneurs wandered inside the bars hawking extra tickets and lot t-shirts. Even Mr. Fabulous bought a Kill Devil Falls shirt. Some guy wandered into the back of the bar, found an empty table, and displayed four or five shirts.

I needed a solid liquid base of beer before I popped a pharmie. The security lines were light to get in and after a thorough patdown the security guard told me, "Have a great time."

I chuckled. I was already having a "great time" with the Brooklyn Lager and the Percoset. I was fixin' to have a fantastic time once the boys took the stage.

Bruce was in the second row off the floor with some music industry folks, while Mr. Fabulous was raging solo in Sec 106. We invited him behind the stage with Nicky and myself in Sec 114. We were almost on top of the stage and Mr. Fabulous had never been that close to the action before. He was pumped for a "perspective show" which meant that for the entire evening, we saw what Phish sees. Quite remarkable view if you ask me, especially when the crowd is going apeshit crazy. You could see Trey and company feeding off of that frenetic energy. It boosted their playing and altered the song selections.

The band took the stage at 8:01pm on the nose. They only kept everyone waiting a full 31 minutes.

E: Day In The Life > Tweeprize

Whenever I gamble on the show openers with my degenerate friends, I usually pick a safe choice in AC/DC Bag or Runaway Jim. Looks like Phish did not deviate much from the playbook. I forgot how much the ground bounced up and down during concerts. The floor was shaking during Chalkdust. Once the first few notes of Wolfman's were unleashed, I suspected that we were going to be treated to a Phish Greatest Hits Show. If you care about things like "sick jams" then check out Wolfman's. I put a star next to it in my notes.

NICU kept everyone dancing. I'm a fan of "Play It Leo" songs and can hear those every show. I love that people dance in the walkways at MSG and the maroon-coated ushers try to shoo them away. They scatter like roaches but return 90-seconds later. I missed seeing girls twirling in the tunnels.

When I was in Albany with IronGirl cruising Shakedown, I haggled with a guy selling Ocelot lot t-shirts. It's my favorite song off of Joy and I annoy the shit out of my friends by singing the chorus ad nauseum. Hey, I love the song about Trey's demonic struggles with pharmies and Oxycontin... something I can relate to. I decided to wear the shirt to MSG. I figured that Ocelot was due up in the rotation on either Wednesday or Thursday. Murphy's Law states that if you wear a lot t-shirt of your favorite tune to the show -- Phish will play it the next night. I was expecting to hear it in the first set on Thursday, so I was more than elated when I heard the first few notes. I got plenty of text messages and @replies via Twitter from friends who knew I was sporting the Ocelot shirt.

The band needed to let the crowd simmer down and smoke a bowl during Brian & Robert. They woke everyone back up with Poor Heart. At that point, I realized that I was in the "Molly VIP" section of MSG. The guy in front of me licked an entire palm full of molly during the Ocelot jam, meanwhile Nicky noticed that two dudes behind us were snorting lines of molly off of the backs of their hands. Hardcore deviants at MSG. Those fuckers weren't messing around.

Sample had everyone in the crowd singing along and it was one of those tunes where it was fun to watch the crowd. Then it happened... the bustout that I had been waiting for since 1999.

I'm a big fan of Peaches en Regalia. Phish is heavily influenced by Frank Zappa, but they shelved that cover song for over ten years. The last time I heard it was fall tour 1999. I recall one in Boise and the other in Austin. The Joker quickly fact-checked the history of the song from Coventry's Armageddon Compound in Colorado. He texted me "9/24/99" and that's when the flashbacks rattled my brain.

I used to take a sharpie with me to Phish shows circa 99-00 and wrote PEACHES on errant balloons hoping that one would land in front of Trey. I wonder why they decided to bust out Peaches at MSG? I'm dying to know.

Fitting with the Greatest Hits theme of the night, Phish closed the set with two fan favorites... Divided Sky and Cavern. Mr. Fabulous was quick to note that the Cincy crowd went more ballistic during the silent "count off" section of DS. But, I felt as though that moment was the loudest peak of the first MSG show. It had been a while since I got those goosebumps as the ground below me was shaking.

I really hoped for another song after Cavern, but the boys decided that an 80-minute 11-song set was sufficient. Wolfmans was the musical highlight of the first set. Ocelot was my personal favorite, and Peaches was a delicious treat.

Phish quickly left the stage and returned faster than expected. Set break was under 30-minutes. I was wandering around the slippery inner walkway when the lights went down. It felt like I was ice skating back to my seat. I saw so many odd things during the shortened-break such as the wookie getting pulled out of the ladies room by two huge security guards who pushed him towards that men's room. One head was so spun out that he was smoking one-hitters in the hallways while another guy unsuccessfully tried to sell a "Time Turns Elastic" Trey lot t-shirt.

Second set had plenty of highlights (Slave > Tweezer and Hood) with two glaring lowlights (Joy and Velvet Sea). I thought that Phish should have ended the first set with Golgi but they opted to kick off the set while 23% of the crowd was still mingling outside in the hallways. Nicky said there was quite a scene in the ladies room. At one point, security was screaming at a drunk chick. Nicky overheard one say, "They all on acid and crack cocaine!"

Shit, I haven't seen crack at a Phish show since '04 tour.

Light had some rough spots as they struggled to get the jam off the ground. It was pretty evident that we were not going to get a bong-rattling 20-minute jam like the throw down in Set 2 of Albany Saturday's show. The ended Light on a positive note and unexpectedly segued into Slave. That's my favorite song and usually gets played at the end of the second set. That's why it came out of nowhere. Solid version. I always get goosebumps when I hear it. Hey, I can never bitch and moan about a Phish show if they play my favorite song. At that point, with Ocelot, Peaches, and Slave under my belt... everything else was gravy.

Phish let it rip during Tweezer. "It's the MVP of the tour," mentioned Mr. Fabulous. "They always hit it out of the ballpark."

Kid Dynamite sent me a drunken text during Joy, "WORST EVER!"

The boys revitalized the sedated crowd with Sparkle as the ground was quaking once again, which morphed into Harry Hood. Mike stepped it up during Hood and kicked my ass. It was awesome to see the crowd's reaction to Hood from behind the stage, but the glowstick war was weak. Obama needs to send in 30,000 reinforcement glowsticks to MSG so we can win the war on wookies.

I'll say something positive about Velvet Sea... at least they didn't waste it on the encore.

Suzy and Antelope were high-energy crowd favorites. By no means the best versions that I ever saw, but the MSG crowd was lapping it up like starved puppies.

I was hoping for a sizzling one-two punch with the encore and they threw us a curve ball with Day in the Life before they brought down the house with Tweezer Reprise. Overall, not a bad show. Many highlights but I felt as though they were holding back a bit. The show was definitely a "Greatest Hits" night which means that Thursday and Friday will hopefully have more wide-open spacey-melt-your-testicles jams.