Show #184. This is gonna be a short review. I don't have much time to write while sitting at the airport. 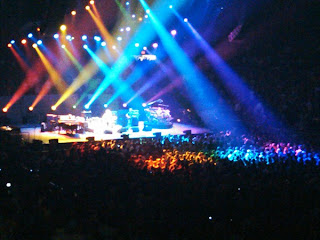 Lights during the encore
Was Friday as good as Thursday? No. But it doesn't matter because it would have been nearly impossible to replicate Thursday's magic. But I'm viewing the Friday show as the third act of a larger ensemble piece. Three consecutive nights of MSG Phish is its own entity. The more I think about this... the more I realize how amazing of a treat that Phish gave us... an early Christmas present if you will.

I pre-partied at Senor's place. It felt like old times like the late 1990s when we would pack 20+ people into his tiny Murray Hill apartment before stumbling over to the Garden to throw down for Phish. That's one of the cooler things about Phish 3.0... all of the memories of yesteryear that spontaneously pop up.

We met Girtz in front of the entrance to Penn Station as tour rats and yuppies collided. He was mingling with all of the random ticketless wooks and other heads in search of a Friday miracle. Tickets were fairly easy to get on the previous nights but Friday's ticket was nearly impossible to find. Luckily we had four together in the first row of the 200 level.

Heavy Things was a mediocre effort. Possum jam was smoking and got everyone moving and grooving as the ground tarted to shake. Lots of Trey wanking off during high-powered Wilson. KDF is hit or miss for me. When they let it rip -- I dig it. This time they sorta dicked around with the jam. Daddy calls KDF "Chalkdust Torture's little brother." Heh. No way. If Chalkdust is Greg Brady, then KDF is Cousin Oliver.

Glide was an unexpected treat and welcomed bustout. Good to hear it played by four emotionally sound men instead of that tear-jerking trainwreck in Coventry while I was knee deep in mud and tripping my balls off. My balls were the only thing NOT covered in mud that weekend.

46 Days was my favorite jam in the first set. Wish they kept it up but they had to cut the 46-Jam short to keep the masses sedated with spoon-fed fan favorites such as Bouncin' and Reba. I smoked tuff during Bouncin' and danced with Nicky during Reba. She loves that song.

Dinner and a Movie was another welcomed rarity. I'm sorta glad they don't play it every third or fourth show, because it still retains its edginess. I also welcome it with open arms.

My buddy Gil doesn't go to as many shows as he used to -- but when he does see Phish, Guyute is almost always played. It sorta happens like that. And yes, he was there last night and they played his song. Nothing is a cooler Phish experience when they happen to play your tune. For me, that's how I feel about Slave.

Maze jam got lost like a spun out wook trying to find his tent in the rain at Deer Creek. Looks like you're sleeping under the VW bus, brah.

First Tube started out flat then took off in a thousand directions at once -- sort of like being shot out of a canon, er, make that a thousand canons. A few minutes into the song, the crowd went bat shit crazy. Screaming. Yelling. Like everyones' drugs kicked in at the same time! A fat kid puked on himself. One emotionally distraught head pissed on himself. I had goosebumps and an erection. The band fed off of that incestuous fire and Trey ripped the proverbial shit out of the remainder of First Tube. I always feel bad for Mike on First Tube. He looks so... bored... while Trey is jumping up and down like a little kid. In true Trey show off/jack off fashion, he hoisted his guitar over his head and swung it around like a massive dildo. All of the sexually depraved fans hopped on for a quick rogering.

First set was almost ninety minutes long... a good ten minutes more than then previous two evenings. yet, the second set started off with a dud. Scents and Subtle Sounds? Blah. What is this 2004? We;re my fuckin' OXY? Scents opener was like watching your favorite football team attempt an on-side kick to start the third quarter... only to flub it and have the opponent recover the football for a touchdown.

The jam into Rock and Roll saved the direction of the set especially since it gave Page a chance to shine. There was another one of those "moments" during the Rock and Roll jam when the crowd exploded into a frenzied trance.

Seven Below gave me flashbacks of the Dec 2002 NYE show at the Garden when Phish reunited and they played Seven Below as it began to snow indoors. I got goosebumps whiel I basked in the warm glow of that memory burn. The Seven Below jam wasn't quite as triumphant as the Albany fuckfest, but the boys were not afraid to open it up and explore new territory. The Twist jam was juicy, like a thick and delicious piece of chocolate cake. Moist is another word that comes to mind.

The boys didn't let up and jumped off the deep end and into Mikes > H2 > Weekapaug. They weren't fucking around and the Mike's Song jam was easily one of the highlights of the second set. It was as though they decided to fuck with all of the acidheads for the first 40 minutes with intense jamming before they embarked into the Mike's Groove saga.

Senor called Horse > Silent the part of the show when Phish embraces their feminine side. It gave me a chance to sit down, catch my breath, and smoke a bowl.

I have been praying to hear Torn and Frayed. It was my favorite song from Exile that Phish played at Festy8. I nearly jizzed myself when I heard they busted it out earlier in the tour and kept my fingers crossed for MSG. Plus there were all of those (bunk) Sharon Jones rumors floating around. I didn't see any hip black chicks walk onto stage at the start of the encore, so I knew that Phish was going to end the show with just the fab four. And instead of a Loving Cup or Torn and Frayed cover from the Stones, Phish treated us with Shine a Light. If you check my iPod you would see that song is the second most played tune from the Exile set. Yep, I quickly approved of the choice.

Amazing show despite a few blah moments. I can't complain one bit. It is unfair to try to compare it to Thursday, but I definitely had a ton of faded fun.

Three MSG shows down. One more to go in Charlottesville.