Las Vegas specializes in culinary delights from every end of the spectrum... to the shit-your-pants-within-15-minutes-of-eating buffets to fast food joints to chain family restaurants to establishments boasting the top chefs in the world... Las Vegas really has it all.

During the previous four days and nights, I indulged in foodstuffs. I have a couple of year-end dinner with my brother, work colleagues, and some old friends. I took a few pictures this time.

Nicky and I arrived in Vegas late on Thursday but well in time to hit up the buffet at the Wynn. Normally, I despise buffets because it represents the downfall of modern civilization. I'm also a "picky eater" and don't stuff my face, so buffets are usually wasted on me. In short, the casinos make money when I eat there. However, I do make a handful of exceptions. The Bellagio and the Wynn are two of the best buffets in Las Vegas, and I usually hit up the Wynn once a year.

The highlight at the Wynn were the game hen. I was sorta shocked that I actually piled one on my plater, but was immediately satisfied with my choice. They added an "Indian" food station which I sampled, but did not heavily indulge in. The best feature of the Wynn's buffet has to be their high end desserts. Since you rarely have room for desserts at the end of a buffet binge, I also take time out and eat them at "half-time" or during my second trip.

Here's some of the desserts... 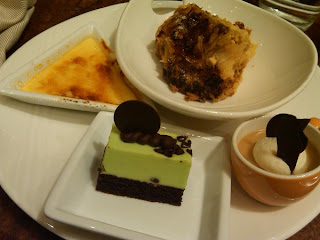 The next morning, we decided to drive way off the Strip to one of my favorite breakfast places in Vegas... The Cracked Egg. They have the best breakfast sandwich in town and their specialty is homemade coffee cake. 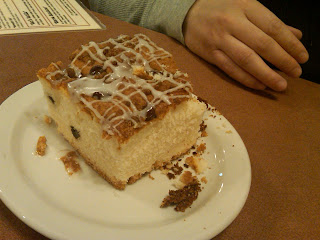 Thursday night, we went to Burger Bar. AlCanthang owed me a dinner in order to pay up on a World Series bet after my Yankees beat his Phillies. Burger Bar is a Thomas Keller joint that specializes in gourmet burgers. AlCantHang added foie gras to his burger. Me? I loved my Kobe burgers. Derek and I ordered shakes before the burgers arrived. You can make you own or go for the special shakes. AlCantHang went for a "Twinkie" shake. No pics there. Sorry.

On Friday morning, I ate brunch with Maudie at the Bellagio Cafe. They cook some of the best omeletes on the Strip. Pricey, but worth it. They have an applewood-smoked bacon omelete. It's the shit. 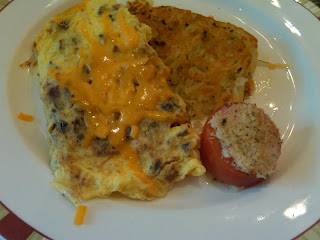 For Friday dinner, I owed Kat bigtime for helping me with the Lost Vegas image and cover. At the last minute, I was able to call in a favor and get us a table at Emeril's place at the MGM. I'm not a huge fan of seafood, but the steak dishes caught my eye. I ordered a peppered filet. Savory. The mac-n-cheese is insane. Made with rigatoni and bacon. We had no room for the jambalaya. But I managed to get down some bread pudding with whiskey sauce. Wow.

No pics there. Sorry.

On Saturday morning we ate breakfast at the Hash House. I was bummed because they were not serving the kind of hash I had hoped. Instead, it was overstuffed and oversized breakfast foods. My pancake was the size of a small pizza. Derek's doubleburger had mashed potatoes lathered in between the patties. 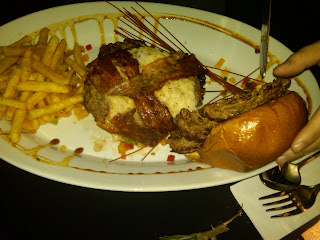 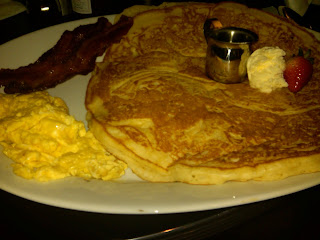 Since we played poker on Saturday, I only grabbed a Sicilian slice at Cessar's Palace food court. I'd have to wait until Sunday to eat again.

CJ organized a private skybox at Emeril Lagasse's Stadium/Sportsbook at the Palazzo. Very cool. We had a huge room with a pool table, four TVs, and a video game machine. The menu was designed by Emeril. I ate the pulled pork sandwich. Derek went for the crabcakes and the sausage stromboli. 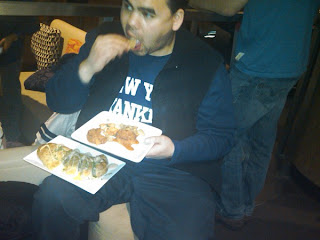 Late night, I went to grab dessert with Iggy and StB. The Hash House was open and I was bummed that they did not serve cake. I got a "Snickers" bread pudding. Not as good as the WYnn buffet's or Emeril. 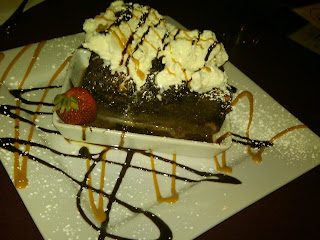