Four Days of Straight Delirium Mixed with a Touch of Sloth 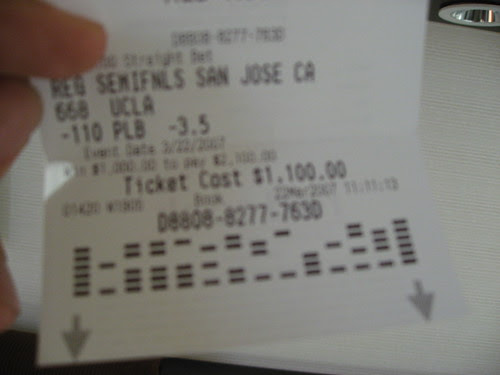 I sat down at my desk on Monday morning for the first time in four days. It felt like a fortnight had passed since I pecked away at the keyboard with the door to my office shut and the music cranking.

A four day bender zoomed by in a dreamy blur.

After the first day, the new routine (not writing) became the old routine. Soon enough the old routine got viciously broken on Monday morning, to my dismay, which put me out of my comfort zone. Usually I'm uncomfortable when I'm not locked inside my office, but in the last couple of weeks, I found more comfort away from my desk and the office. I was stricken with Spring Fever. After holing up all winter writing and re-writing and editing, I was feeling the urge to spend as much time outdoors -- that is until March Madness' arrival because all I wanted to do was get high, gamble, and watch basketball for 42 hours .

Here's the thing... March Madness was not supposed to happen for me this year. I usually got to Vegas with my brother and Senor during the second week of March Madness, but I had to work this year with an assignment in Chile covering a poker tournament at Vina del Mar. I was going to also spend a couple of days with Nicky bumming around and checking out the country which meant that I was supposed to miss the first week of March Madness game and some of the second week.

Alas, the work assignment and the entire trip was canceled after the 8.8 terramoto that rocked Chile when we were in Uruguay. After watching the rioting, looting, and images of severe damage in different cities in Chile on local Uruguayan TV, we knew that our impending trip was going to be canceled.

Initially, I was bummed out about the cancellation of Chile. I could always use money because I outsourced or passed on a lot of freelance work over the last few months in order to finish up Lost Vegas. But, I was really looking forward to visiting Chile with Nicky and Otis. The only downside to that trip to South America would be that I'd miss the entire first and second rounds and half of the Sweet 16 games.

When Chile got the ax, I realized that I could catch all of the March Madness games. I already had over a week blocked off; any work projects, deadlines, and meetings were scheduled before or after the trip. I decided to use that unexpected free week for an epic guilt-free bender -- lots of basketball, gambling, card playing, bong-toking, and other illicit activities -- without even leaving my couch. Most people save up all their money and book a trip to an exotic destination. Me? All I wanted to do was to stay home.

The adventurous pre-bender began on Wednesday. Nicky reminded me that morning that it felt awesome that we didn't have pack our bags and rush off to LAX in order to board a flight to Santiago, Chile. While most of my friends were getting snookered for St. Patrick's Day and/or avoiding getting puked on, I was supposed to be in transit. Travel days. They blow. If you're a frequent reader of Tao of Pauly, you know about my disdain for air travel these days -- the least enjoyable aspect of what I do for a living and the hardest and most stressful obstacle to overcome when traveling for holidays and vacations.

You bet your ass I was dancing an Irish jig on St. Patrick's Day because I didn't have to stand around with the other inbred cattle at the security lines at LAX, quivering in fear of the security theatre, and moaning when the dipsit in front of me forgot to take off his shoes, and belt, and remove the cellphone from his pocket. I gained an extra day, shit two extra days (traveling to/fro Chile) when I thought I was going to be flying or locked up inside airports. Free time is more valuable than money.

I spent St. Patrick's Day with my own version of green beer -- the Northern California medicinal batch called Holy Water because it was grown by a priest. No bullshit. I played online poker and crunched the numbers of the opening round match ups for March Madness. I filled out all of my brackets and diversified my picks in different pools. It's kinda cool that diverse circles of friends in my life have embraced the March Madness spirit. Some of my former colleagues on Wall Street run a high-stakes pool with $23,000 going to the winner. No bullshit. I couldn't afford the buy-in directly and had to invest in a "mutual fund" of other sheets. If I win outright, I still clear a few grand for a minimal investment. I also joined a pool run by one of my fraternity brothers -- which is the only contact that I have with these guys since I'm not on Facebook. Of course, I'm running a Pauly's Pub pool but I also started one up on Coventry. Who knew that almost 80 Phisheads and other hippie-types were heavy into hoops?

Wednesday before Thursday's March Madness games is sort of like Christmas Eve. I had trouble sleeping that night and woke up when it was still dark outside on Thursday. Games started at 12:20pm ET or 9:20am. I was up almost five hours before tip off in the first game because I couldn't contain my excitement. I felt like I was 7-years-old and waking up on Christmas morning to tear into my presents.

The routine for four days...

Wake up before the dawn. Then it's an hour or so of the morning writing workout. I try to squeeze in ten minutes on Twitter, ten minutes of work emails, and ten minutes of reading current events while I'm eating my breakfast at the coffee shop. I'm one of the first batch of customers and return back to the apartment before 7am. I have two hours to game tipoff and I check to see if the lines moved. I consult a few gambling websites, confirm my older bets, and I place new ones. Then I settle down on the couch with two laptops, a mason jar full of Holy Water, a half of a Percosett, and turn on the TV. Nicky drove me to the grocery store the night before so I could load up on supplies -- munchies, chips, hummus, cookies, granola bars, and a shitload of club soda. I don't move from the couch expcept to piss or go to the fridge to secure more food or beverages. I turn off the sound on the TV because the announcers are so annoying (plus I have to blow out the sounds of the commercials to avoid brainwashing and subliminal advertising). I crank up my iPod because I'd rather listen to Jerry Garcia Band, Widespread Panic, and Phish than the talking heads on CBS. I stream two other games on my two laptops. Without fail, the game that I have the most money on at the time is not the one being aired on CBS, so I have to sit through the not-so-perfect online live feed. Sometimes my browser crashes or the video player freezes and I have to reboot. That's why I have my CrackBerry open to sift through Twitter and check up on scores. When Nicky has a free couple of minutes, we play twenty or so hands of Big Deuce. During lulls in the hoops action (or when I don't have ongoing wagers on a game), I play online poker because I'm trying to win money to fund Phish summer tour. I only leave the apartment midway through the March Madness session (around 3pm when they air a break) to walk down the street to Jack in the Box to buy a BIGASS ced tea. I shuffle back to the apartment and resume the above activities for the next six plus hours. When the last game is over, I open up my sports book account to make sure that I got paid. I place a couple of bets and check out the progress of my different brackets before I crawl into bed completely exhausted after a lengthy day of grinding out a living as a sports bettor.

I repeat the process for Friday et al.

On Saturday, the games started an hour later which meant I got a little more sleep to cure my exhausted body. Saturday's games were only 10 hours long instead of 12+. I anchored myself on the couch from 10am to 8pm and cranked up the tunes. On Sunday, the games resumed at 9am and ended by 5pm. By that point, I welcomed the shortened eight-hour day. Four days of constant gambling and riding that intense adrenaline high definitely takes a lot out of you. Physically. Mentally. Spiritually.

I woke up on Monday morning in a daze.

I wanted to resume the routine that I developed four days prior but there were no games to bet on until Thursday. Reality set in, followed by frustration, anger, and soon met by depression. I technically didn't have to go back to work, but I had a few things that I postponed (like a guest post on Upstate Frolfer and trying to find an apartment in Las Vegas for the summer) and should get my ass into gear. I woke up Nicky and suggested a round of frolf before noon. She agreed, but needed to an hour or so to eat breakfast and check work email before we could drive down to Manhattan Beach. So, I wandered into my office, closed the door, sat down, and cranked out this post.
by Pauly at 3/23/2010 01:36:00 AM