I suppose that I should start from the beginning.

Nicky and I left the apartment at 10am on Monday and would be in transit until 2pm (which is +6 hours of PT) on Tuesday. A total of 22 hours of traveling, yet my client only pays me for 1/2 of a travel day. Most of that time was wasted in airports or stuck on two insufferable American Airlines (AA) flights. Forced to eat crappy overpriced food. Forced to deal with Draconian security measures. Forced to deal with annoying rude fellow passengers who are waited on and herded by (mostly inept) corporate hourly-wage slaves, who themselves despise their employers as much as they hate their cranky customers.

I love flying these days. Can't you tell?

The entire airline travel industry has been destroyed by fear mongering politicians and corporate greed. Traveling used to be one of the most pleasurable experiences in life. Now? It's a humiliating and stressful annoyance.

I barely slept the three days leading up to our departure date. I was swamped with work, playing in a poker tournament at Commerce Casino, and trying to prep for several weeks of hectic traveling (ten weeks into the future looked like this: Uruguay > South Carolina > LA > Chile > LA > New York City > Connecticut > Rhode Island > Connecticut > New York > LA) . I cut back sleep out of necessity. Plus, I also wanted to wear myself out so I could sleep on the redeye from Miami to Montevideo. I had a tough time sleeping (period), let alone trying to sleep on airplanes even with enhancements such as Xanax.

Nicky is a Platinum flier on AA because of all her multiple sojourns to South America in the last year. I reap her benefits as a "companion" passenger which includes priority check-in (getting on planes first with limited overhead space is so fuckin' clutch especially in an era when airlines are charging for checked bags). We also gain access to all AA Admiral's Club lounges. The Admiral's Club at LAX was packed, but Nicky and I found seats in the "TV room" which had a dozen comfy chairs lined up in three rows in front of a giant plasma. That would be a perfect place to watch a sports event, I thought, as I sat down, tuned out MSNBC, listened to Phish, and read.

I bought Eating the Dinosaur by Chuck Klosterman for $5 via a used bookstore, which was a warning sign that it was probably the least popular book that Klosterman penned. I breezed through the first 100 pages on his essays about popular culture. Hits and misses. I loved sections (Ralph Sampson, the art of the interview) while I skimmed others (ABBA). The section on Curt Kobain/David Koresh was fascinating. I learned a lot about how artists are mired in self-hatred as they achieve more and more commercial success. That self-hatred, as Klosterman described had "defined the totality of their being."

We incurred the first bad beat of the journey. Our AA flight to Miami was delayed. In fact, the plane that was supposed to take us had yet to arrive. Luckily we had a "cushion" in Miami with a three-hour layover as a buffer against a delayed flight. I anticipated a delay when I purchased the tickets, because AA flights out of LAX are always delayed. It's bullshit but that's one tip that I acquired from being on the road and enduring previous bad beats from AA. As a frequent business traveler, I'm shocked when I hear about my colleagues getting sent on overseas assignments with the tiniest of wiggle room between connecting flights. Obviously the people responsible for booking these trips for my friends have zero concept of a traveler's reality -- especially when dealing with overzealous security measures, retarded passengers, and habitually late airlines that often lose your luggage.

My first AA flight to Miami sucked camel testicles. The flight attendant forgot to serve me a drink. I asked for club soda and he said that he didn't have any on the cart and would have to fetch it in the back. One hour later -- he never returned. The aging queer apologized and explained that he's getting old which causes memory loss.

"So you won't remember it when I tell you that you're a fuckin' moron?" I thought. And yeah, that's what I really wanted to say. Instead, I accepted his half-assed apology and I suggested gingko root to improve his memory.

The rows on AA were so cramped that I had a difficult time writing a column even though I had one of the smallest laptops ever designed. I specifically bought it because it fit on an airplane tray and I could save time by writing in the skies (also in preparation for the future when all flights eventually get outfit with wifi). I felt bad for Nicky and suits who had bigger laptops who are forced to use their laptops like half-open clams.

Somewhere over East Texas I completed the first draft of my Bluff article about playing poker with D-list celebrities and then I finished off Klosterman's book. Luckily, I brought two books with me and read the first two chapters on Postmodernism.

We made up time in the air and had enough time during our layover to have a proper meal at an overpriced airport restaurant. We ate at a bar that served tasty chipotle mayo. We headed to the Admiral's Club, which sported plenty of extra power outlets. We charged up all of our devices (iPod, cell phone, laptop, Bose headphones).

My colleagues were also connecting in Miami. Three of them had just flown from Copenhagen for an assignment and were making "hero trips" from Northern Europe to South America via North America. Wow. I thought that we had it bad.

Our flight contained thirty high school girls from Argentina spending their summer vacation with a trip to Disney World. They were all in the back of the plane, so we were spared their giddiness and incessant chatter.

We picked up a second bad beat. The plane to Montevideo was supposed to be a 777. Instead, it was a 767, which meant an older plane with no personal entertainment system. I got stuck with the movie that they showed everyone -- Fame. I eyeballed half of it with the sound turned off. I used to watch the TV show (of the same name) when I was a kid and an ex-girlfriend of mine actually attended the high school that the original film was based on. However, the new film version was unwatchable.

I barely touched the shitty dinner that AA tries to pass off as food. Rubber chicken that tastes like possum. Blah. I ate the soggy roll. At least the flight attendant remember my drink on this leg. I didn't sleep. I tried but no luck. The lights and TV screens were turned off during the rest of the flight. I was stuck starring into the darkness with nothing to entertain myself. I didn't even have the benefit of the "flight map" to check our progress.

I was in my own personal hell. I lost my pen and couldn't find it anywhere. I also had two of the loudest snorers were in my section. One of them sounded like he had a sick puppy caught in his throat. A weird old guy was walking around and staring at people as they slept. The coach seats on AA tend to attract a lower class of citizens, and he was probably standing around with his dick out whacking off to all the high school girls.

When I tried to sleep, the guy in front of me woke up and decided that it was time to fidget in his chair and begin a cycle of getting up and down forty times to check for shit in his bags in the overhead compartment. At 6 feet tall, my knees are touching the pouch in front of me so every time someone sits down, I get slammed. It doesn't hurt -- but it wakes me up. I got pissed. Cranky. Hadn't slept in days. The Xannies weren't working. I knew I should have taken a double dose, but that always makes me sluggish the next day and I had to work. Gah. Caught up in a no-win situation. Instead, I listened to more Phish and scribbled down angry passages in my notebook about the moral decay of the airline industry in the 21st century.

Ninety minutes before we landed, the aroma of bacon aroused me. We sat only a couple of seats behind the business class cabin and I could smell the bacon cooking in their microwaves. The rich people feasted on high-end cuisine while the masses in the back were served a soggy croissant and yogurt. Bleh.

We landed only a few minutes behind schedule. The immigration line was on the slow side. My colleagues caught a miracle and all of their luggage (and camera equipment) made it to Montevideo from Copenhagen. They were shocked, as was I. Nicky and I purposely travel light and go carry-on. Heck, the last two times Nicky checked her bags on AA -- they lost them. 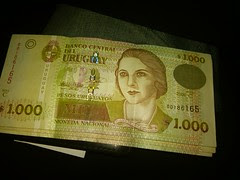 I cashed $400 US into 7,000+ Uruguayan Pesos. I usually don't have to change too much local currency when I travel to South America because as much as the US dollar is weak across the board, the locals still want greenbacks. I still obtain a bit of local currency because you never know which store/restaurant rejects USD.

Six of us hopped into a van that would take us the last leg of our journey -- Montevideo > Punta del Este. It took about 90 minutes and I passed out for about fifteen minutes as we drove through the Uruguayan countryside peppered with tiny one-story structures, locals on mopeds, cattle, and plush green everywhere.

We were not staying in the hotel at the casino. Instead, we were all put up in a hotel about thirty minutes away. We were less than a five minute walk from the beach but we couldn't walk to work. Our hotel was situated next to a chapel. The lobby had a small bar with hundred statutes of Jesus located on a shelf above the bar. The hotel featured an Italian restaurant, but it was about a half a block away and you had to walk outside to get there. 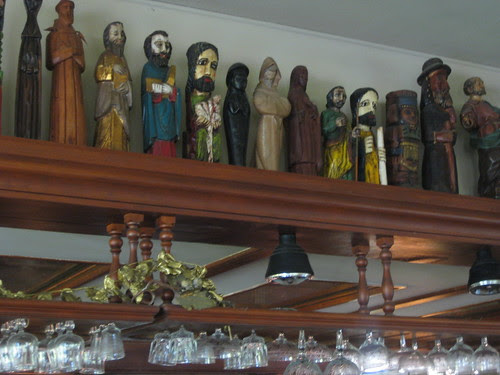 Our room was... blah. I called it a "Motel 6 with a bidet" in my notes. The room smelled like puke and bugs were, well, everywhere. The mosquitoes outside were welcomed compared to the critters that we had to share out room with.

The hardest thing about the hotel? Spotty wifi and the local internet provider blocked almost all of the gambling sites -- which caused a problem for the poker media who got stuck in that hotel. Nicky was especially frustrated because she was unable to hand in assignments or do research. Another bad beat.

But hey, at least we arrived in Punta del Este in one piece. 22 hours after we left LA and I had barely slept. After an unsuccessful attempt at a nap, I wouldn't get any more sleep for another 12 hours.

Email ThisBlogThis!Share to TwitterShare to FacebookShare to Pinterest
Tags On the Road, Uruguay