Monday was rough. I jumped trough the ring of fire without thinking things through.

I was too eager to do any real research about the disc golf course near Dodger Stadium and jumped at the chance to check out the closest course from our apartment in the slums of Beverly Hills. Nicky was curious to see what all the fuss was about and she agreed to drive me to Elysian Park -- the grounds surround the lush ravines around Dodger Stadium. When you see those huge hills in the outfield shots of Dodger games -- well that's part of the park. 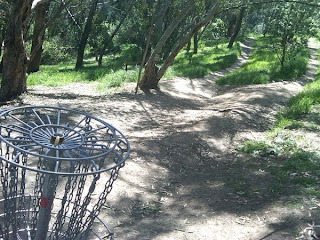 I could even see the stadium from one of the elevated holes on the course. That's how high up we were. The views were pretty cool, especially of downtown LA. But the charming vistas made for a difficult course. When we got home and looked up the difficulty rating, it came in at 9/10. Yeah, no shit. Probably should have paid attention to that fact before we started playing and lost two discs on the first hole!

Bit of an oversight on my part. I was too excited and failed to plan this excursion out, which is something that I rarely do. I'm usually prepared for any sort of obstacle, but this instance, I allowed my excitement to get the best of me. As I stood on the first tee hanging off the side of a ravine, I realized that Nicky had never thrown a disc. Sure, we got a couple of tosses in on the baseball field on our way over to the first tee, but that was it. Shit, I knew we were in trouble when I glimpsed at the narrow dirt path. To the left was a sloping hill with trees and bush. To our right, a thirty foot drop. Basically, unless you parked your disc in the middle of the narrow path, you were fucked. Hence why this course was constructed for true pros and the best of the best... and not for a couple of eager potheads.

A couple of lesser traveled paths led down the side of the ravine, but that was only helpful if you happened to get your disc anywhere in that vicinity. Otherwise, you were buried underneath three feet of brush. I lost a disc or two in those conditions. While I trudged through the tall grass, I could not help but wonder if I was going to stumble upon someone's marijuana grow operation or a makeshift meth lab. I found a couple of lean-tos. Homeless Vietnam vets like to camp out in the parks and one of their sleeping spots was well-hidden off the side of the ravine on the first hole.

I came across a black dog hiding in another batch of weeds. Part of me felt... maybe this isn't the safest place? I got paranoid and began thinking that the area was booby trapped.

The only people we saw were a coupleof Korean teenagers making out in an SUV and the old queer with two tiny dogs. He walked by me on one of the secluded paths. He seemed amazed that I was actually playing on the course. He even said, "So that's how this works."

He mentioned he saw all the metal nets but had no idea what they were for. Not too many frolfers come up to play on one of the tougher courses. No wonder it was empty and we were the only ones.

I found a couple of easier holes on the back nine -- and by easier I mean low potential that we'd lose our discs. I used the time to teach Nicky how to putt. We walked most of the course and decided to skip the tougher holes. We went down to the baseball field to throw the discs around. Nicky wanted more practice and it felt nice to be outdoors in the shadows of Dodger Stadium and frolicking in the warm California sun. Nicky mentioned that we're lucky to get to do things like that since we didn't work in offices. I told her that's one of the perks and benefits of being a writer. For every late check that we have to wait and wait to arrive, we have special days when we can do random stuff.

When we got home, I took a spin up to the local sporting good store to scout out frolf discs. One of the old guys had no idea what I was talking about but I wandered over to the golf section and luckily found a small display of about a dozen discs. I picked up Nicky a pink driver and ordered a couple of cheap discs online.

We planned on checking out a flatter nine-hole course in Manhattan Beach but something hit me hard on Tuesday. Allergies. Nasty fuckers too. I popped a Clartin, something I only had because I'm allergic to cats and I gobble Claratin when I crash at friends' houses who have cats (which came in handy when I spent time at the Joker's, Casa G-Rob, Friedman's, and with IronGirl). Sometimes LA is under a thick cloud of smog and it doesn't blow out and gets trapped. The downside of that in the Spring is that the air is filled with pollutants including pollen and microbes that I'm allergic too. The result is a constant nasal drip and my nose feels like it got bashed in with a sledge hammer.

I desperately wanted to play a round of frolf, but I sunk in deep into the couch. I even took a morning nap and waited for the Claratin to take effect. Once it got mid-afternoon, any hopes of playing were squashed. With two deadlines looming for today and March Madness occupying Thursday through Sunday, I'll have to wait until next week to toss a round.
by Pauly at 3/17/2010 11:22:00 AM

Email ThisBlogThis!Share to TwitterShare to FacebookShare to Pinterest
Tags Frolf