Money on the Dresser

I once befriended a hooker.

That didn't come out right. I should say that... I once became chummy with a call girl.

OK, now I'm really starting to dig myself a hole and my girlfriend is ready to grill me with a thousand and one different questions. Let me clarify even more... I had become acquainted with a high end call girl from New York City. We never actually met officially. Just lots of emails back and forth. She was an avid reader of this blog, and a sometime commenter of Tao of Poker. She even submitted a short story to Truckin'. She seemed rather ordinary with one exception... she had sex with men for money. She did make any excuses about it. She enjoyed sex and had no problems selling herself. And her cookies weren't cheap.

Her philosophy was simple. Society was hypocritical and pointing fingers at prostitutes when they were all prostitutes themselves. 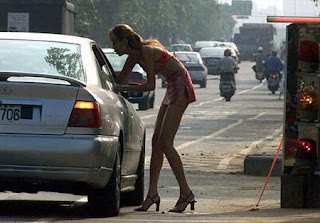 Look, we're all whores at some time in life. Some of us less, others are more. Sure we might not be taking it in the ass in the literal sense, but who among us hasn't been royally fucked over?

If you ain't a pimp, then you're a whore.

I didn't say that. Neither did Shakespeare or Bob Dylan. It might have been Ice-T or Ice Cube, Pete Nice from 3rd Bass, or one of the crew from Wu Tang? I forget exactly who, but the source of the quote doesn't matter as much of the simplicity of the underlying fact of the statement. It actually goes back to something I have written many times before... we live in a use and abuse society. If you ain't using someone, then you're getting abused by someone.

Pimps and hos. Royalty and peasants. The haves versus the have nots.

No matter what city I lived in, or what industry I worked in, I've always come across a section of people who will do nothing short of trying to exploit you. It's the nature of the game of life. Politicians do it all the time... all they want to do is use us to get into office and once that happens they will keep using us to stay in office. They're not really looking out for our interests, rather, they're concerned with their careers and their legacies. Oh, that and paying back the juntas and companies who funded their campaigns to begin with. To them, we're that cute piece of ass that they want to nail... and will do anything possible to get us in the sack. Once the deed is done... that's it. They are going to fucking sleep. The worst thing is that they didn't even pay you. You did it for free.

Big Business entities are the most ruthless pimps on the planet. Come on, you don't actually think they care about your well being and compensating you for what you're really worth? To them you're just a number. If they could outsource your job or hire an illegal Mexican... they would. That's why it's important that you're are the ideal employee in their eyes -- to be blunt -- a fuckin' sheep. Otherwise, you have to be truly talented and indispensable. That's the only way they will put up with your bullshit and demand for higher wages.

A couple of years before the drugs war exploded in towns along the US/Mexico border, I first heard about the feminicidios... horror stories about scores of missing young women who were later found raped, murder, and missing body parts. During my first visit to Juarez, I noticed all these pink crosses at the side of the road. I asked my friend from El Paso about the origins of the pink crosses. That's when she clued me in on the feminicidios. The crosses were memorials constructed at the sites where dismembered bodies were discovered.

The feminicidios began in the mid-90s and escalated through the millennium. Some religious feared that the missing women were part of ritual killings during fin de siecle. A few journalists were certain that the murders were the evil doings of a the worst serial killer of all time. Some enforcement types thought that the murders were a precursor to the drug wars. The exact number of feminicidios varied from 500 to 5,000. Who knows for sure.

I once heard a theory that many of these murdered young women shared something in common... they worked at maquiladoras... or massive sweat shops and factories doing work for international corporations. I read one theory that bus drivers were the ones doing the killings. Most of these workers had to be bussed from Juarez city center to the factories. When the girls refused the sexual advances of the bus drivers, they were raped and killed.

However, the most compelling theory is the most haunting. One journalist suggested that the young women were killed because they were getting out of line at the work place... demanding higher wages and better working conditions. When they attempted to unionize, they were quickly "removed" from the factory and never seen again.

What really happened in Juarez in the 1990s and early 2000s? No one knows for sure. My grand hypothesis is that combination of "all of the above", but specifically the theory about the factories killing off workers who showed any dissent.

The ruthless suits don't quite resort to those gruesome tactics in the American workplace... yet. But more and more we're learning every day what happens to good citizens who are fed up with the system, unplugging themselves from the Matrix, and demanding their true rights to life, liberty, and the pursuit of happiness. Unfortunately, you upset the herd when you roam the other way. Anyone outside of the box or decide to march to the beat of a different drummer is a target for ridicule. Our fear mongering society is quick to point them out to authorities. Once the federales get involved, who knows what happens next.

Yes, we're mostly a world of whores. Some of us grow up to be pimps, which is sort of like the lesser of two evils. Sadly, that's the supreme goal in life... to be the one exploiting a stable of prostitutes... instead of being the whore, turning tricks for peanuts.

In the end getting paid is still better than doing it for free. Sure, I do plenty of stuff for free but that's all part of a greater master scheme to turn Tao of Pauly and Tao of Poker into a pay wall.

Drug dealers have been using that business model for decades...

1. Give it away for free.
2. People get addicted.
3. The next time, you charge.
4. When people try to quit, they get even more addicted.
5. That's when you raise the prices.

So kids, to sum up... just remember that only sluts do it for free. Pro whores do it for the paycheck.