Podcasts in Vegas: Tao of Pokerati 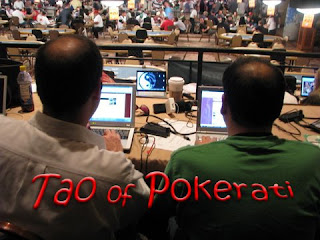 My buddy Michalski at Pokerati and I started a podcast in the summer of 2008 which we dubbed Tao of Pokerati. We've had many guests over the years including Nicky, Derek, AlCantHang, and Benjo.

Tao of Pokerati is a low budget podcast that might be the shortest in the poker genre clocking in around 3.5 minutes per episode. That's what makes it so much fun.

Anyway, we returned to podcasting action with five episodes. We really got things cooking with Episode #4 and Episode #5 is already an instant classic.

Episode 1: Amazon Reunion - Michalski and I snuck into the Amazon Room while preparations were still being made for the 2010 WSOP at the Rio.

Episode 2: Big Room - We wandered over to the Pavilion area where the satellites and cash games are currently running in addition to where most of Day 1s will be played out.

Episode 3: Pooling Resources - Michalski and I take our show outdoors... to the Rio's pool. We riff on a few subjects including a big meeting that we had just finished.

Episode 4: Late Fees and Gunfire - I gave Michalski shit for showing up late to things and for being a lazy ass uploading Tao of Pokerati episodes. We agreed on a $50 late fee/fine for every time he's tardy and we discussed what worthy cause should get the said fines.

Episode 5: Lesbian Kisses (featuring Benjo) - Benjo and I killed time in the press box by watching lesbian kissing videos on YouTube. We offered up analysis and play-by-play while pondering a future as professional lesbian kissing video commentators. Alas, there was a sudden and unexpected twist at the end of one of the videos that left everyone in the press box aghast (see video below)...