I missed the lot.

Sure, I traveled to SPAC for the music (flight from Las Vegas to NYC, then train to Albany), but I missed the lot. I can listen to Phish any time in an attempt to replicate a live concert experience, but the parking lot is its own indigenous entity. Shakedowns sprout up all the time at different music festivals in the parking lots of other bands, but nothing is quite like the enthusiasm, energy, and effervescence of the Phish lot. I missed it dearly. The biggest party in town. 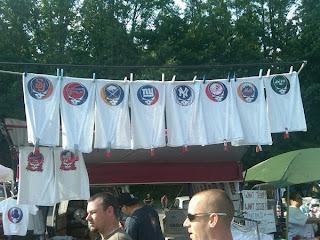 The last couple of shows I saw (MSG and Miami) had odd lot scenes. For one, MSG lacked one entirely while Miami during the NYE run was a little too out of control with nitrous all over and the local homeless freaks, drug dealers, and other miscreants had mixed with the traveling carnival of Phisheads. Miami was as crazy as I've seen it in the 3.0 era including random busts by undercovers. I'm partial to a raging lot, but Miami was a little too spicy for even my tastes, which is why I was excited for SPAC because one of my most favorite things about the overall Phish experience is a stroll through the lot before AND after the show. That's the best way to take the pulse of the community, the phans on the street, and assess how the band's playing is affecting the crowd.

The moment we pulled up, a a hint of garlic wafted my way, I had that sort of goosebumpy feeling that I was finally back where I belong. Over the next two days, I'd peel off the outside layers of life tilt that had calcified and almost turned me into a mummy.

I'm not an escapist. If anything I spent most of my adult life commenting on the forms of escapism in our lives. In some sense, Phish is a vessel of escapism -- the music, the scene, the tour, the lifestyle, et al. But I don't focus on that as much as the spirit of the crowd -- people from different places who dropped everything in their diverse lives to come see Phish at this given time in space. For that, I'm always excited to be a part of any collective experience. That's why so many fans gush over or connect with other phans who have had similar shared moments. That's why I've seen Phish 191 times.

I spent the last three weeks in Las Vegas. My job entailed me sitting inside a casino for anywhere from 8 to 18 hours at a time writing about degenerate gamblers playing cards. It's a comfortable living, but being indoors all the time inside a vortex of negativity seriously damages your mental status and makes you lose faith in humanity and institutions. You also start to question God and faith -- all of which I detailed in my upcoming book Lost Vegas. I started to drown about two weeks into my summer assignment. Thoughts of seeing Phish at SPAC became my only life preserver which I clung too while the raging sea tried to swallow me up. SPAC gave me something to look forward to and I was counting down the hours before I could flee Sin City for a quick two-show hit and run.

The hardest part was leaving my girlfriend behind and a few Phisheads who couldn't make the journey with me. One of the benefits of doing what I do is the ability to set my own schedule. Last summer, I skipped 20 days of the WSOP (a 48-day festival of poker) to see Phish and I didn't regret a second of that. This year, I reduced the number of days off to just nine days away for six shows. SPAC was Part 1 of 2 side trips that I planned this summer.

I've often wrote that your personal headspace sets the tone for a particular show. Sometimes, disappointment occurs when you walk into the venue with lofty expectations (which happened at the last half of the fall tour after those sizzling Cincy shows which ended up being the highwater mark of Phish in the 3.0 era). So in this instance, I was simply happy to see Phish for the first time since New Years and at the same time, I was thrilled to be away from a negative work environment and enjoy my first day off after working everyday for three weeks. In that regard, they could do no wrong. Trey could pee into my ears and I'd be giddy about it save for an odd snarky remark on Twitter.

I had a tremendous amount of fun at SPAC. Have I heard better Phish (this tour, in 3.0, at SPAC, ever)? Yes. But I can't recall a time I needed a Phish show badly more than this weekend. In those respects, these SPAC shows will always have sentimental value for me.

Lucky for me, Irongirl lived very close to SPAC and let me crash at her pad. She's like my big sister and is always looking out for me. We have so many common experiences, especially in music, plus she's a veteran of Dead tour and attended both UVM and CU-Boulder. She's been entrenched in hippie circles since the 1980s and simply put, she's got her shit together and is the perfect tour buddy since she's really into Phish now after slowly embracing the band. We mesh well as friends even though she's been clean and sober for an impressive two decades -- and everyone knows my struggles. She mastered the discipline of clean living and is able to function in a a highly-tempting environment, which makes me admire her willpower even more so. I can't walk down Shakedown without coming out the other side with a fistful of goodies that will fly me to Jupiter's moons. Meanwhile, Irongirl more than welcomes the role as designated driver, especially since she knows the Saratoga/Albany area well, like the back of her hand. In short, Irongirl carted around my faded ass during the Albany shows last fall and these two SPAC shows. That's why she's super awesome and I can never thank her enough!

Now, I sit here in NYC with one eye on the clock knowing that I have a flight back to Vegas in a few hours. I'd rather not go, instead, prepping for a show at Great Woods, but instead, I'm shuffling off to Vegas and re-commiting myself to the insane asylum for ten or so days before I break out to see the North Carolina shows and the Atlanta shows. I'm about to delve deep into my notes and string together some sort of narrative about the weekend as the show plays in the background. But nothing I write can replicate the jarring shock to my system that I got during the first few minutes I stepped into the lot and the same feeling returned when Phish opened up the Saturday show with Tweezer Reprise.

It really felt as though I was in my happy place for the first time in months.

A heavy blanket of darkness was lifted thanks to a sojourn to Saratoga. I'm saddened that I'll be tossed back under the blanket, but for a brief moment, I got to feel what it was like to hang out with the old me. It's the real me that I haven't seen in a while that I miss dearly. I loathe what I've become, especially the type of person that Vegas had transformed me into. Which is to say, I'm fighting the urge to cancel my flight to Vegas, shrug off my responsibilities, put aside the book (I've waited five years, what's another couple of weeks?), and follow the path back to the person I miss dearly. Me.
by Pauly at 6/21/2010 11:18:00 PM