Fellini started the mockumentary movement. I read a David Foster Wallace essay on David Lynch and he wrote something about Fellini was the last filmmaker to invent a genre, and that genre was the mockumentary. I've seen almost a hundred and by far, Woody Allen mastered the mock documentary and consistently nailed the genre in many of his films. Spinal Tap also stands out as one of my favorite mockumentaries.

When I heard all the ruckus about Casey Affleck shooting a (mock) documentary about Joaquin Phoenix'sabrupt decision to quit acting in order to pursue a career in hip hop, I kinda figured they were up to shennaingans. What made Sasha Cohen's Borat so amazing and creatively organic is that he used real people who genuinely thought he was actually a Borat-type of character. So in this case, Casey and Joaquin are running around with a similar philosophy -- except that everyone knows it's them and not some weird Eastern European dude in nuthuggers driving an ice cream truck. When word got out that he was faking it and a serious wave of doubt hit the mainstream press, many aspects of the film were even more interesting for me because in the later scenes, I kept wondering if so and so knows this is a put on and is in on the joke, or if they are totally get fucked with. Anyway, it's an odd mind trip set up against the most surreal circus in the world -- the life of a famous Hollyweird actor.

Take it for what it is -- a couple of guys who are friends and bored to death with working the grind of the Hollywood system, so they decided to poke fun at "celebrity" and smoke a shit ton of weed in the process. Joaquin is playing the tortured artist, jaded with fame, and sick of being a whore so he's on an inner search for his true self, and along the way, he puts on weight (displaying his Fat Elvis phase or in this instance, Fat Joaquin), and stops grooming (aside from trimming stray hairs on the back of his biceps) -- all of this behavior is supposed to foster a positive environment and allow his inner persona to shine, which happens to be a hip-hop artist.

Meet... "JP"... (Joaquin's initials if you didn't figure that out already) who treats his "people" like shit including his handlers, publicist, agent, assistants, and other friends/slash/hanger-ons. The worst part of the film, besides seeing JP's beer gut, is excessive frontal nudity from JP's random assistant who is in the middle of sobering up.

JP is a dirtbag and cruised the internet for hookers and then orders them up his SoHo pad. Cliches ensue including snorting lines off of the whore's tits.

JP shuns his old life and gives Ben Stiller the cold shoulder. Stiller showed up at his house and wanted to discuss JP's role as a co-star in a film called Greenburg. However, JP takes career advice in the form of a Zen poem from Edward James Olmos, or EJO as JP calls him.

JP is told he needs someone in the know to produce his album. So his people set up a meeting with Puff Daddy/P-Diddy/Sean Combs. Alas, JP gets stoned, missed meeting with Puffy. When he finally meets Puffy, he's shocked when he's told "Show me the money!" When Puffy realized that JP was broke, he never returned his calls.

JP found out he's gonna be in Washington for Obama's inaguration and decided to stalk him around town. It's a spontaneous trip and has no transportation or accomodations when he arrives. He's gets holed up at a hotel somewhere, eats pizzas, and smokes weed -- he even did the towel under the door trick. In true JP fashion, he partied too hard, passed out, and couldn't be awoke for the inauguration speech -- which he misses completely. His crew goes to the Mall without him and he's pissed when they return because they didn't wake him up, despite attempts to do so. When they suggest they hit up the inauguration parties, JP scoffs at them.

"I don't give a shit about fucking inauguration parties. They are movies premiers but with less pussy."

JP only wants to find Puffy so he can produce his album. He flies into a prissy rage and blames his assistant for fucking up and not arranging to have a car driving him around DC. During his rant, JP revealed that he was envious of fellow actors, Tobey and Leo, who had private jets and limos, while he flew commercial and sat in the back of a min-van, where he was blazing up a joint.

JP finally tracks Puffy down at a recording studio in LA and gets his audience -- he plays his demo and Puffy is not impressed, and rather insulted. Puffy breaks the bad news that he's not going to produce JP's debut album. JP set off on an epic bender, flew to NYC, and finished up a junket for his "last" film Two Lovers. He lashed out at a few interviewers and acted uninterested in the others. The junket included a spot on Letterman... you know, the now infamous interview. 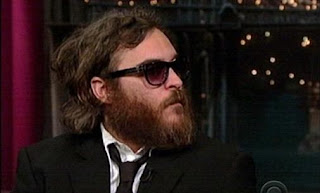 Letterman was in on the schtick and even came up with the "Unabomber" joke as he played along.

After blowing the Letterman gig, JP freaked out in the limo and ran off into Central Park where he broke down in hysterics. To complicate matters, one of his assistants that he treated the worst, urinated on him in the middle of the night.

Weeks later, JP sat in the dark and read all of the bad press via the internet. He stewed at everyone mocking him or "stealing" his disheveled look and playing that off as a joke to get a few cheap laughs. When he seemed to be at his worst, JP was about to have a huge gig in Miami -- and what appeared to be the last chance for him to gain any bit of credibility as a musician/hip-hop artist.

JP's Miami gig has been seen by millions already via You Tube because every fucking person in the club that night had out their cell phones and cameras recording his every second of his mutter rhymes, especially the fight that ensued with a heckler.

"I got $1 million in a fucking bank account. What do you got, bitch? You washing dishes and making fun of me?"

That was the bit that everyone was waiting for, right? The exact moment JP snapped and dove into the crowd and ignited a brawl with a heckler. He didn't even finish his first number and the gig was over. He pulled a Brian Jonestown Massacre and ruined his one chance at proving his professionalism.

How does JP react? Cut to footage of JP blowing chunks in a toilet.

JP finds redemption with a trip to Panama. The film began with home video footage from the 1980s of a small JP (then named Leaf) climbing up on a mini-waterfall and being encouraged by his father to jump. The little kid took what seemed to be an eternity before he jumped in the water. Well... the film ended with an adult JP replicating that same jump. A baptism, or re-birth of sorts.