The Silence of the Dogs

It's been a rough week because the slumlord went on vacation and his minions scheduled renovations on the vacant apartment upstairs without telling us. That's the least he could have done -- given us a head's up that our lives were gonna be hell for a week, with disturbing noises waking us up every morning. The worst of it? Being woken as early as 6am when renovations began above us. The most annoying? Having our parking spaces blocked by construction vehicles or reserved spaces outright taken. In Los Angeles, where parking is sparse and always in high demand, you're allowed to shoot someone in two instances: 1) self-defense and 2) if someone takes your reserved spot.

Our slumlord is super old and never around. He has dementia, yet takes a tour of the property every two months with his elderly wife leading him around, and more acting like a cane so he doesn't fall over. The slumlord's adult kids run everything, but it appears to me that those minions are bilking the old man because this property is very shitty compared to similar buildings on our street. The minions are pocketing all of the repair monies and spending very little on upkeep. As one of the usual maintenance workers said, "Oh, Mister R? He's so cheap."

The minion's have no fucking communication skills and failed to even monitor the renovations. That's why day workers showed up at 6am on a Monday morning and began scraping the walls above us. When we attempted to complain, we got voicemail because one of the minion's was on vacation.

The past week has been a bad routine out of an old Abbot & Costello movie -- where ever I'm sitting in my apartment, and the workers decide to fix something in the space right above me. This has happened the entire week without fail. I understand the need for them to work, and I attempt to coexist by working in the opposite end of the apartment (essentially we have three potential work spaces -- the dining room/living room, my office, and the bedroom). Yet, when I'm in my office, that's where they are banging away right above me. When I move to the bedroom, they decide to sand those floors above me. When I move out to the dining room, they decide to work on the windows. It's frustrating joke.

When we confronted the slumlord, his minion's blamed the day workers (same old story -- rich people don't take responsibility and blame the poor people humping a min-wage job) and nothing gets resolved. Like this morning when the water got shut off without a warning. The minion said, "I had no idea they were going to do that." No apology was ever attached. Just a passive-aggressive "not my problem because I didn't do it, it's the plumbers fault, he did it."

Gah. Guess we're going to have to move out of the slums of Beverly Hills or start withholding rent and find a good lawyer.

On a good note, I temporarily solved the barking dog problem. The long term solution included letters to the Animal Police who are broke and are looking to fine pet owners with loud dogs. That's just gonna take a while, so in the meantime, I found a special device that supposedly silences the dogs. 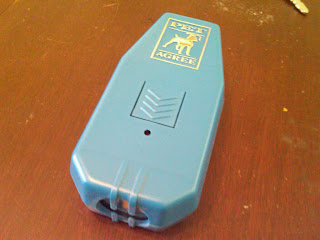 I purchased a gizmo that looks like a garage door opener. Supposedly, the blue device emits high frequency sounds that bug the shit out of dogs. So whenever they bark nonstop, I get within 50 feet, aim the gizmo, and press the trigger.

And the fucking thing works.

I was initially skeptical because the gizmo cost $20 and mostly anything that cost $20 can't be that effective because if it really changed people's lives, it would be much more expensive. At any rate, I was willing to throw away $20 if the dog silencer didn't work. I'm happy to say that it worked -- at least for now.

I asked Cherie, a dog trainer from Santa Barbara, what I could do to get the mean dogs next door to stop barking when their owners mercilessly left the dogs outside for hours on end. The mean dogs go nuts and slam up against an eight foot high wooden fence separating our property and the alley between buildings. The dumpster is located on the opposite side of where the dogs hang out, so whenever a homeless person approaches the alley in search of bottles, the dogs go ape shit. I can almost hear Montgomery C. Burns saying, "Release the hounds!"

Cherie suggested asking my neighbors to get a special surgery that would reduce the volume of barking, or to get a special collar that releases shocks or spray whenever a dog barks loudly. Both were worthy solutions, but it was impossible to persuade thoughtless neighbors to take the necessary steps (and dip into their pockets) to reduce the canine noise pollution. That's when I decided to take matters into my own hands.

When you press the button, a tiny red light is illuminated, signaling that the device is on. I cannot hear the emitted sounds, so as far as I know, it could have been broken and I would never be 100% sure. It would have to take a field test to determine the effectiveness of the gizmo. When I first pointed it at the dogs (actually I pointed it at the fence as the dogs bounced against the other side), something magically happened about twenty seconds later -- the dogs stopped violently barking and started to yelp, almost whimpering and crying. Nicky was shocked at how quick it worked and that the violent growlings ceased.

I've used it a few times since, and Nicky used it once with similar results. When the dogs start barking, you go outside, hit the gizmo for about thirty seconds, and they dogs stop after getting zapped. The gizmo spooked the dogs and they are afraid to unleash incessant howling.

Too bad I can't get that gizmo to silence the workers upstairs. That would have solved all my problems. I know that there's a device that blocks cell phone signals, so you can interrupt calls in public places if people are being too obnoxious. I always wanted to get one of those -- more for prankster reasons than anything else. What I really want is a gizmo that silences tools that won't shut the fuck up when I'm in the press box at the WSOP. That would be awesome -- as soon as someone starts yapping, I just press down on the button and zaaaaaaaaaaaaaaaaaaaaap -- the person stops in mid-sentence, whirls around, and walks away. The world would be a better place if I could sell a product that silences extraneous human chattiness by pressing one button.
by Pauly at 9/05/2010 04:26:00 AM