"I've never seen so many hot 19 year old girls," commented one of my buddies (who wished to remain anonymous because he's married) about the bevy of soused high school and college girls at the show.

They were right. I dunno if I've seen that many high school girls at Phish before (at least, in a very long time). And yes, 92% of the attendees were raging drunk, which meant that the crowd was rowdy and feisty, and lent the feel of a Widespread Panic show.

Welcome back to Southern fried Phish after throwing down for three nights in a row with Colorado hippies, hipsters, tree thuggers, and feral indigo children. Three or four of the best shows I've seen in the 3.0 era have been south of the Mason Dixon line (Asheville and Alpharetta), so it goes without saying that the double dip in Charleston had the potential to be a rager. My buddy Andrew joked that I was joining the "Married with Kids" edition of fall tour because most of my friends who made up the South Carolina crew were exactly that -- weekend warriors away from their wife and kids for a two-night bender. My journey began in Denver on Thursday and I flew to Charleston, caught a cab to Folly Beach, and met up with my crew. We drank, swapped stories, closed out one bar, played cards til the wee hours before we crashed, woke up early for breakfast (Otis raved about the shrimp and grits), then played a round of frolf on James Island. 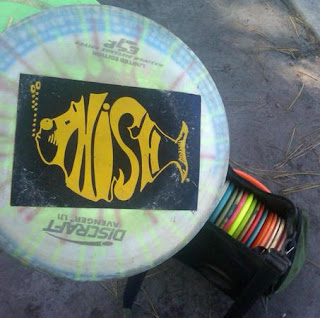 I lost the above disc in a lake on a course had lots of water, and I'm surprised only one disc went astray as Bad Blood won the high-stakes Coventry Frolf tournament. We drove to North Charleston, checked into our hotel (right behind the coliseum) and noticed a college football team was sharing the hotel with us. No way they were gonna get any sleep with raucous Phisheads in close proximity. We pre-partied at the hotel and waited for the lovely ladies to arrive; Strawberry and Krista made the trek from Florida, meanwhile the eldest Disco Sister (aka my Southern drug mule) drove down from North Carolina. Once we had the entire gang together, we migrated to the lot.

A mini-Shakedown popped up in one of the parking lots and party favors were in high demand. I know it's a dry Shakedown when people are stopping me and asking me for molly. I didn't hear a faint whisper for any mind altering substances. Friday's show wasn't sold out and the marketplace was flooded with extra tickets. I ran into Disco Brett who said he sold one extra for as low as $20. He dumped another for $40, still way below face value ($72 or so with fees).

Photo by @twhims
We headed inside to the general admission show and found a spot on the floor in front of the soundboard and watched the floor quickly fill in. Lights went down at 8:03 and Trey unleashed the opening licks to PYITE, as the frenzied audience hooted and hollered as their adrenaline perked up. A rowdy Possum ensued with Gordo leading the charge and Trey making a big fat O-face.

"Trey is happy with himself tonight," said Andrew.

Yeah, hell yeah, because he didn't have angry heads chucking glowsticks at him. One of my buddies was in a trance while watching a couple of high school girls dirty dance with each other, and occasionally grinding up against him. We joked that he usually has to pay strippers hundreds of dollars in Vegas to get a similar arousing affect.

The party continued with the ultimate crowd favorite Bathtub Gin, as the boys kicked off the Charleston show with three powerful tunes PYITE-Possum-Gin. During the "we love to take a bath" section, I was doused by warm beer (drunkards were throwing around beer, well, at least I hope it was beer because if we were at Panic, there would be an 87% chance of urine showers during Chilly Water).

Page's dad joined the Phish for a rendition of Bill Bailey. The old coot was well received by the shitfaced crowd, especially when he did the silly knee dance (otherwise known as the "Charleston").

"Dance like a mother fucker!" shouted the guy next to me. "Dance motherfucker!"

"It would be fucked up if he had a heart attack on stage," mentioned Bad Blood about Page's elderly father.

"I hope to die at a Phish concert someday," I blurted out.

Bad Blood deadpanned: "You will."

Fatty Boogie On got all the high school girls grooving in salacious positions, and one of them even displayed eloquent stripper moves. She definitely has a potential future on the pole. Just when the funkified Boogie jam picked up momentum, it got cut short. Trey seemed a bit lost on Destiny Unbound, and my buddy Phil reminded me about the Destiny streak -- I've seen the last five times they played it. One of the college kids in front of me asked "Is this a new song?" I fucked with the noob and said it was a Madonna cover.

I prefer Backwards in the first set, but they jam it out longer when they play it later in the show. If the floor wasn't so tightly packed, I would have bailed to take a piss during Bouncin'. The Charleston version of Stash included an ominous presence of UFO lights and I was mesmerized on the silhouettes of a few people dancing behind the stage in the tunnels leading out from the seats to the hallways.

Joy was well placed in the first set, but had a little fuzzy distortion emanating from the sound system. That got cleared up in time for a Buffalo Bill bust out, followed up by Dog Faced Boy. Otis has been to three Phish shows and he seemed perplexed that he's seen DFB twice.

Plethora of glowsticks filled the air for a high-octane Antelope dance party. Not the most precise version, but energetic for sure with a "Mike-O" reference. The 90-minute 13-song set ended with a severe greatest hits slant, but that was definitely OK with me (even though I saw a few repeats from Broomfield) because they smoked the shit out of the building. After that lukewarm closing show in Colorado, the boys returned to basics and brought the heat with plenty of Trey wanking off jams.

At setbreak, I caught up with Ziggy Stardust and my brother texted me that the Yanks were down 5-0. We improved our spot on the floor to center court and prepped for the second set.

Heavy, thick, and goopy Down with Disease opener. My favorite bits popped up around 7 minutes into the jam. CK5 turned off the spotlights hovering over the band and they played on a darkened stage as the rest of the lights on his rig scanned the audience. I heard a 2001 tease at the tail end of the ambient DWD jam, and that's all that was -- a tease, before Trey launched into Prince Caspian. The belligerent crowd sang along loudly.

Twist > Roses Are Free was one of my favorite moments of the show. They didn't delve off into too many elongated jams during the night (in which they played 29 songs), and instead, went for the machine gun approach spraying rapid fire bursts here in there -- still mightily effective with a high kill ratio. Twist included some of those machine gun jams, with lots of Gordo and Page interplay. In the middle of Twist, I took a drag off a one-hitter and felt someone rush up to my side and grab my midsection if almost to tackle me. In a millisecond, I thought that I got popped by an undercover cop. The powerful force kinda freaked me out because only a cop would tackle an assailant in that rough manner. I whirled around and saw Strawberry Shortcake, who gave me a huge hug. She had been hanging out in one of the upper sections, but migrated to the floor to find us. Thank God it was her grabbing me and not the fuzz! She told me that she was rip roaring drunk and that she had made out with a boy during the first set -- who then passed out after they sloppily locked lips.

Had no clue that Roses Are Free was next up on the menu after they pulled out of the delicious Twist jam. The crowd enthusiastically sang along with the Ween cover and the band reached an energetic highpoint for the show (an apex that would later be surpassed). An unpredictable My Friend My Friend ambushed us and the boys took the crowd along on a quick sojourn down the rabbit hole into middle earth where all of the aliens, reptilians, hobbits, and wooks live (when Sound Tribe and Phish are not on tour). They did not finish up My Friend (no sinister giggling -- which always freaks me out when I'm tripping balls).

My Problem was much improved compared to the song's debut in Colorado. My other favorite bit of the show was the ass-shaking funk monster Tube and a scorching Mike's Song, which was one of the better version that I experienced in 3.0. The Mike's Groove sandwich was broken up a bit with Weekapaug as a stand alone dish. Mike's was followed up by a calming and soothing Horse > Silent. I'm a big fan of Mexican Cousin, which came out of nowhere. I've caught 5 out of the 8 times it's been played (which is a nerdy Phish stat that I'm more proud of than 9 TTEs and seeing 6 out of 8 Destiny Unbound).

Weekapaug was a bit flat and nowhere as mind-bending as Mike's, but the crowd lapped it up. Page went nuts on the Clavinet with a funky Suzy as the crowd jumped, stumbled, danced and sang along. I did not expect a Slave in Charleston, and was happy to hear it. Started out slow and built to a massive crescendo. Fishman's fills were astonishing and he sounded like three African drummers playing simultaneously.

They encored with a dynamic Character Zero with everyone on their feet, arms thrust into the air and chanting along. Predictable encore, but it still kicked our collective arses.

I headed to Shakedown after the show and the local federales shut it down around Midnight. The lot was dry...again. I returned to our hotel (a five minute walk from the venue) and partied it up in our room. Otis and Andrew switched off handling the DJ duties. Whatever booze was leftover from the pre-party was heartily consumed, until the booze ran out around 4am and the party was over.

Phish bounced back from an off night in Colorado with a greatest hits-heavy theme for the first night in Charleston -- which marked the first time Phish returned to South Carolina since Greenville 98. Fun night. Lots of drunks. And the schwasted high school girls were an added bonus. Man, these days I'm feeling a lot like Wooderson from Dazed and Confused... "That's the thing I like about high school girls...I get older and they stay the same age."