Friday's rager and ensuing festivities meant a super slow Saturday morning, but somehow I rallied and sobered up enough in time for a proper diner breakfast before heading to the Trop to play in the Phamily Poker Classic. The guys at Mockingbird Foundation (Kevin and Charlie) hosted a kick ass charity poker tournament. The back of the poker room was filled with familiar Phisheads with proclivities to cards, and for the first time two of my worlds collided. I've played in almost a hundred charity events during my stint in the poker industry, and by far, the Phamily Poker Classic was one of the most enjoyable I've ever been a part of. 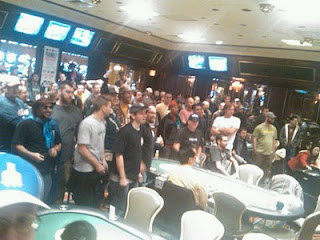 Space was limited and the popular event had been sold out for weeks. I was fortunate enough that the gang tapped me to be one of the bounty players. Before the tournament started, I chatted with Pete, Jim, Scotty, and Basher. Luckily, I got to sit at the same table as Benjo and Irongirl. Too bad I didn't last very long. I was not the first player to bust out, but I was the first bounty player to get knocked out. Poker is a bitch sometimes, something I know all too well. Cameron from the Pharmer's Almanac sent me packing. For successfully knocking me out, he won a Live Phish CD and an autographed copy of my book, Lost Vegas. On a cool note, I was able to get a cool poster by Erin... 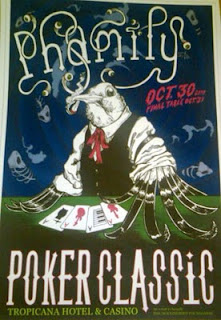 Benjo and Irongirl didn't last much longer. While I waited for them on the rail, I chatted with Dave "ZZYZX" Steinberg and Mitchell, one of the few British heads who made the journey across the pond for the three-show run. ZZYZX was convinced that the boys were going to cover Little Feat on Halloween, as the swirling rumors shifted from Zeppelin to Genesis and now Little Feat. My buddy, the legendary AlCantHang, made a cameo at the Trop and he was ready to help us pre-party once everyone was knocked out of the tournament.

At the Trump, we noticed an incapacitated guy on a stretcher being wheeled away by paramedics. He was an old fat guy and not an overdosing noob. The lounge area (that had a DJ) just inside the Boardwalk entrance of Trump had been the place to be the last two nights. I ran into a guy from college that I had not see in 16 years. The area was swarmed with heads and more folks were in desperate search of extras with their index fingers pointed toward the heavens. More people wore costumes, which added a bit more flair to the evening. I found Gavin and he was attempting to sell his Saturday ticket for Halloween. He was unable to find anyone to hook him up. 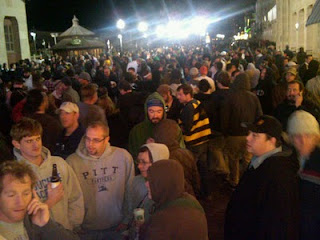 In front of Boardwalk Hall
More undercover cops prowled the boardwalk area, especially the beach, where they broke up a couple of tank mongers and whisked away any other miscreants. In the seaside town of sketchiness, you really have to fuck up big time to get hauled away by local po-po.

We headed inside and about 40-50% of the crowd was in costume. Benjo had a theory that they were folks not going to the Halloween show, so it was their only chance to dress up. I thought he had a good point, but the actual percentages were lower, and yeah, it was definitely cool to see a few creative costumes.

We were rocking the second row of one of the 200 level sections and squeezed Gavin and Irongirl in our row. The lights went down and Phish kicked off the Saturday night show with Kill Devil Falls. They avoided playing a lot of newer material during the Friday show, but kicked Saturday off with one of their more harder-rocking songs from Joy. Unfortunately, my one-hitter got clogged and I had to perform emergency surgery on the glass piece.

Cavern is a turbo boost vehicle usually appearing toward the end of the first set, so this one popped up unexpectedly. I could tell that the techies diligently worked on the sound deficiencies from the previous night. Gordo could be heard in the mix much better in Foam and Trey was turned down a notch (but Big Red was still loud as fuck).

The show finally reached cruising altitude with Guleah Papyrus. The highlight (and one of my favorite moments of the run thus far) was the pause near the end when CK5 killed the stage lights. The crowd took advantage of the pause as the band stood in darkness, and a full aerial assault of glowsticks quickly filled the air and the crowd got louder and louder as more and more glowsticks were hurled around the longer that the band paused. They ripped back into Guleah and the crowd below me trembled.

Chalkdust started off innocent enough before things got really really really interesting. During the jam out, Benjo tapped me on the shoulder when we both heard a Zeppelin tease. I thought it was just that -- a Jimmy Page lick that Trey was taunting us with -- but it ended up a whole lot more as they tore into Whole Lotta Love for about ninety seconds of insane shredding. CK5 lit up the crowd with those bright light crowd lights and you could see everyone reeling in a collective orgasm with a little taste of Zeppelin, before they returned to Chalkdust like nothing had happened.

Ha Ha Ha was up next, which was Phish's way of letting everyone know that the joke's on us. No Zeppelin for Halloween.

Page took the lead with a cover of Walk Away, and he usually is the focal point of the jam out, but the Zeppelin interlude in Chalkdust lit a fire under Trey's ass and he just shredded the hell out of the jam (and dare I say, stepped on Page's toes and sorta nudged him out of the way for a bit of superfluous wanking). Little did we know that vibe would be carried out through the remainder of the show.

The crowd ate up Wolfman's and the usual high-octane funk was replaced with a more of a Latin-samba rhythm accompanied by an odd vocal jam that eventually morphed into Undermind. Fishman let loose his inner octopus and was drumming with what sounded like eight simultaneous arms.

Loved the frantic, menacing Page intro to Gin and the band was met with a superlative reaction to the "we all take a bath" lyric. Gin jam had a few juicy parts that I'm eager to hear again. The set ended with a poignant Squirming Coil. It was a song that I used to loathe in the 1.0 era and I eventually embraced it in 2.0, but now I'm digging it. Coil went from hate > tolerance > love in a decade's time. Fish, Gordo, and Trey snuck off stage when CK5 darkened the stage lights, save for two white spot lights hovering over Page as he pecked away a soulful solo. He took a bow and left the stage to end the set.

The second set kicked off with the funk and a Tube that I had been waiting to hear for a while. I had some phone issues at that point and figured out that the mothership was blasting the venue with an electromagnetic pulse which is one of the reasons my battery was getting drained in a matter of hours.

After a savory Possum (Gordo was the obvious MVP) that included a few more Whole Lotta Love teases, it was time for blast off with a ground-shaking Tweezer. The AC version will go down in Phishtory as the infamous "Zeppelin Tweezer" because of all the teases and medley that was snaked and peppered throughout the song. Unofficially, I had scribbled down Tweezer > Heartbreaker > Tweezer > Ramble On > What Is And What Should Never Be > Tweezer > Stairway to Heaven, but there were plenty of other bits tossed in there (that I also can't wait to listen to again). IronGirl thought she heard a Castles in the Sand tease toward the end of Tweezer just before they explored Stairway. Irongirl mentioned that the guy next to him was in tears during the Zep bustouts.

"Happy Halloween!" Trey shouted after they finished up. "See ya next year!"

If you were hoping for Zeppelin on Halloween, that Tweezer pretty much let you know where you stand. But as Benjo pointed out, "They played all songs that were not on Physical Graffiti. So there's still hope." Yeah, true, but it's a real glimmer of hope at this point.

The Zep stuff was so powerful and unexpected that it overshadowed what I thought was one of the better bits of the second set: Halley's Comet > 2001 > David Bowie. Figured that 2001 would have been saved for the third set on Halloween, but they managed to squeeze it between a ripping Halley's and a sultry erection-inducing Bowie.

They downshifted into a mellow Show of Life, which the guy behind me welcomed because he said that he needed a breather after all of the Zeppelin and the 2001 dance party.

Smoked tuff during Backwards. Trey rushed over to Gordo and whispered something in his ear and then bolted to tell Page. Trey called for another Zep audible, this time with a bong-rattling Good Times Bad Times. Man, talking about a smoking way to end a fantastic set of Phishy Zeppelin. As my buddy Bruce remarked, "Yeah, the Zeppelin songs were sloppy, but who the fuck cares. It was one of the best Phish shows I have ever seen."

The encore included a slow-starting but tension-building Sleeping Monkey, before the conclusion of Tweezer Reprise. Not to be outdone by themselves, Trey whipped his pud out one last time for a final bit of Whole Lotta Love shredding before they ended the show.

Whole lotta Zeppelin is what we got served up on a Saturday in Atlantic City. They definitely through hardcore Zep fans a bone with the Zep-heavy show, so fans won't be pissed (or "too pissed" as Benjo said) when they play something else on Halloween.

As Saturday night bled into Sunday morning, the rumors shifted away from Little Feat and headed towards Frank Zappa territory. I'm still holding out for Hendrix.

Eleven shows down this tour. One more remaining, including three sets for Halloween. At this point, I don't care what they play. It's gonna be a rager/throwdown/asskicking no matter what they play.
by Pauly at 10/31/2010 04:20:00 PM