I'm sleep deprived, which is why I get cranky sometimes for no reason. I finally figured out why that surly monster takes form, because I don't get enough sleep. The only thing that I've discovered allows me to sleep is the one thing that I'm struggling on a daily basis to combat -- and that's painkillers. When I eat Vicodin on a regular basis, I sleep for longer intervals and fall into a deeper sleep, which means that I wake up a lot less in the middle of the night. It's a total catch-22, but the only positive thing that comes out of an old-fashioned pill popping bender is that I'm getting lots of sleep.

Don't you hate quandaries like that? I've been very good. I only ate painkiller three times since September started. Once was for a concert at the Greek, and the other two were the last two Sundays, which I had set aside for a dozen hours of mind-numbing entertainment in front of the boob tube featuring football and the few programs that I actually follow. It's no coincidence that the three best nights of sleep I've had in months were following those minor incidents.

Alas, my eyes are heavy. They itch. The circles underneath by eyes darken with every hour that I'm awake. I tried to sleep, but had too much swirling around my head, because I'm in the middle of a welcomed creative phase, where it seems like I'm bursting with ideas and energy and not just limited to writing. I flirted with painting again, something that is a byproduct of too much to say, but not enough outlets to say it. 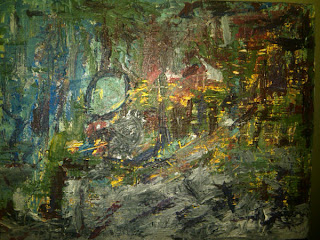 Untitled work from this week

The surplus of ideas is something that doesn't always happen, and it's a sincere joy to go with this flow. All I can do is just open up blank pages and allow the thoughts to manifest itself onto virtual paper. Sometimes I come up with solid stuff like the Land of the Lost bit, other times, I junk what I've written because it resembles the internal dialogue of a speed freak, which we know is the case, but I'd rather do my best to hide that obvious character flaw in my published scribblings on the web.

The last couple of days included rare rain in the City of Angels. The wet weather provided a cheap and lazy way for us to wash the car without actually have to pay for someone else to do it for us. The rain also meant that the hypnotic sounds of dripping water echoed in the alley, drowning our the song of the drenched birds that took shelter in the tree across the way. The wetness means that our neighbors keep their unsufferably loud dogs inside, so I welcome the rain because it means I can write and read in my office in an undisturbed manner, without hurling gratuitous f-bombs and searching for the dog zapper to hush the feisty canines.

The wet weather also means a lot less drivers on the road, but the ones who are out and about are generally poor rain drivers, mainly because of lack of practice. If you live in Seattle, you get plenty of practice driving on wet pavement, roads, and highways. It's something that you're used to, sort of like living in Minnesota or Colorado during the winter months and not blinking twice about driving during a snowfall. That's why so many citizens in LA don't drive when it's raining. It's sort of odd to see the streets semi-empty, but as soon as the darkened skies break, and rays of sunshine poke through the thin layer of cloud cover, the cars return en masse to the road.

The rain is something that allows me to sleep. Perhaps that's why my insomnia has gotten worse after I moved to Las Vegas (where it rarely rains in the desert), and then relocated to uber-sunny Southern California. The last time in my life when I can recall getting a decent amount of rest was almost 12 years ago when I lived in Seattle. Sure, I was working my ass off at four or five different crappy part-time jobs, which made me physically tired every day, but the sounds of the rain lulled me to sleep. Shortly after I departed Seattle, I became stricken with insomnia. Coincidence?

But the rain did not put me to sleep the other night. Instead, I found myself gazing out the window at a puddle, illuminated by a flood light in the alley. The frequency and strength of the ripples in the puddle were determined by the size of the raindrop, and I must have watched a couple of thousands droplets collide with the pool of water for an hour. It was a soothing meditation as I listened to my iPod. Sometimes meditating is better than sleep, although I would have preferred sleep over mindlessly zoning out to Mother Nature.
by Pauly at 10/07/2010 04:20:00 PM